Treatment of lung cancer depends on the type of cancer it is, how fair it has spread and how good a person’s general health is. If the condition is diagnosed early and the cancerous cells are confined to one small area, surgery may help to completely remove the cancerous cell. There are ways to help prevent yourself from being diagnosed with lung cancer and to avoid surgery completely. In fact, with the right lifestyle choices, lung cancer has a 79 percent change of being prevented.

Radon is a radioactive gas which is released from the normal decay of elements such as uranium, thorium and radium in rocks and soil.

It is an invisible, odourless and a tasteless gas that seeps up through the ground and diffuses in the air.

While not widely discussed, it is an important cause of lung cancer and it is important to have your home tested and treated for radon. 1 in 15 homes in the USA are thought to have high levels of radon, according to the United States Environmental Protection Agency.

The absolute best way to reduce your risk of lung cancer is to not smoke or to quit immediately. 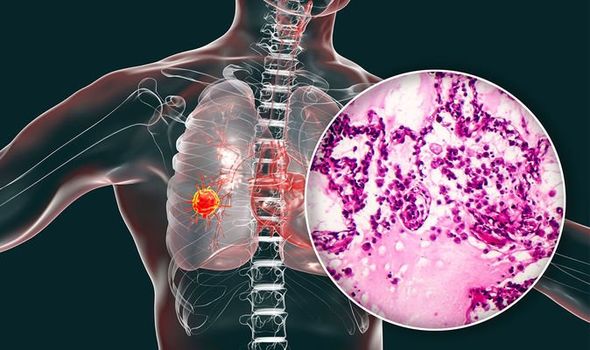 Smoking is the number one risk factor for lung cancer. If you stop smoking before cancer develops, your damaged lung tissue gradually starts to repair itself.

No matter what your age or how long you’ve smoked, quitting may lower your risk of lung cancer and help you live longer.

There is no sure way to prevent lung cancer but trying to adopt a healthier lifestyle will always help rather than hinder. It’s important to be aware of the early signs of lung cancer.

The NHS explains: “There are usually no signs or symptoms in the early stages of lung cancer, but many people with the condition eventually develop symptoms including:

The most important thing a smoker can do to reduce risk is to quit smoking. That said, exercising and being active can offer a change in risk

Doctor Kathryn Schmitz of the University of Pennsylvania

Doctor Kathryn Schmitz of the University of Pennsylvania said: “The most important thing a smoker can do to reduce risk is to quit smoking.

“That said, exercising and being active can offer a change in risk.”

Limiting alcohol intake, drinking green tea, being careful with certain supplements and wary of chemicals at work are all ways to help prevent lung cancer.