Patient safety is being ENDANGERED by crippling NHS shortage of 40,000 nurses in England, royal college warns

Patients are in danger of missing out on vital care due to a shortage of 40,000 nurses in England, experts fear.

A Royal College of Nursing report warned the soaring rate of hospital admissions was dwarfing the recruitment of extra nurses to the NHS. 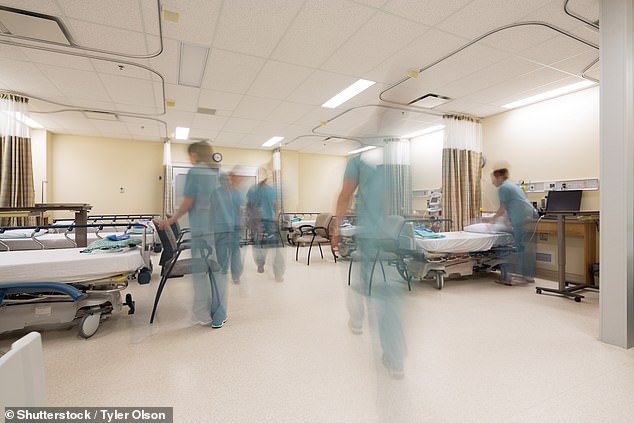 Patients are in danger of missing out on vital care due to a shortage of 40,000 nurses in England (file image)

The RCN is now calling for new legislation to ensure accountability for safe nurse staffing at all levels of health and care services in England.

It also wants an investment of at least £1billion in nurse higher education to reverse the declining numbers opting to study nursing.

‘Staffing shortfalls are never simply numbers on a spreadsheet – they affect real patients in real communities.

‘We’re calling on the public in England to fight for nurses and sign our petition calling on the Westminster government to invest in the future workforce and make clear who is accountable in law for safe patient care.’

A separate poll for the trade union, of 1,692 Britons, found 71 per cent think there are not enough nurses to provide safe care to patients.

Of 1,408 people polled in England, 37 per cent said their top priority for any extra NHS funding was the recruitment of more nurses.

Meanwhile, some 67 per cent wrongly believed the Government has a legal responsibility to ensure there are sufficient nursing staff in the NHS.

During the time period covered by these statistics the Government has axed the bursaries for people studying nursing or midwifery at university.

And the budget for helping staff to develop their skills in the workplace has now been cut to a third of its value five years ago.

Nine out of 10 NHS nurses say a shortage of staff is affecting the quality of care they can give their patients.

A poll of 2,064 staff by the industry magazine the Nursing Standard in March this year found some feel out of their depth while others feel like they have to work late to get things done.

One anonymous nurse said: ‘Care in the profession has gone… [we’re] only interested in getting beds emptied for emergencies to come in. I’m unable to give good-quality care on a daily basis.’

The survey found 61 per cent of nurses said their employer tried to fix a staffing problem but had failed, while 83 per cent said they had reported a concern about staffing to their boss.

Not having enough staff affected the most vulnerable hospital patients, the nurses revealed.

‘We have found ourselves having to look after some really complex poorly medical patients and feeling completely out of our depth and knowledge,’ one said.

And the problems persist in care homes, too, with one reporting they had to look after 44 residents spread across two floors for a 12-and-a-half hour shift.

The 2013 report on failings of care at Stafford Hospital, where hundreds of patients died, pointed to a significant shortage of nurses as being partly to blame.

Healthwatch England chairman, Sir Robert Francis, who examined the failings at Stafford, said: ‘Healthwatch evidence suggests the public’s patience with overstretched staffing and the impact this is having on care is starting to wear thin.

‘People have rightly come to expect compassion and empathy from health and social care staff, and they should not have to adjust this expectation because of pressures on the NHS.

‘To promote patient safety it is also important that the public understand the difference between a busy ward and one that may be unsafe.

‘This is an important message for those in charge of planning and scheduling of staff rotas to hear.

‘One of the key ways of maintaining patient safety is to ensure there is an adequate number of staff on shift to attend to peoples’ clinical needs.

‘Patients and the public also need to have access to real-time information about the number and type of staff required on any ward for it to be safe and the actual number on duty.

‘Safe staffing is also about ensuring the right skill mix. Healthwatch wants to see health and social care organisations getting the right balance of professional skills and experience in the workplace.’

Dr Moira Fraser-Pearce, director of policy at Macmillan Cancer Support, said the study was another ‘bleak reminder’ that pressures on workforce were having a knock-on effect on patient care.

She added: ‘We have received promises that an NHS People Plan will be published before Christmas.

‘Health and Social Care Secretary Matt Hancock must take responsibility for this and ensure that the health and social care system gets a long-term, fully-funded plan for its workforce so that cancer patients receive the safe, personalised care they so desperately need and deserve.’

The report comes after it was revealed in March that more than 200,000 nurses have quit the NHS since 2010.

The number quitting because they’re unhappy with their work-life balance has almost tripled in the same period.

There has been a 73 per cent rise in nurses leaving for health reasons, and 69 per cent more resigned because of a lack of opportunities in 2018 than in 2011, official figures show.