Hay fever is a common condition that’s caused by an allergy to different types of pollen, according to the NHS. Pollen is a fine powder that’s released by plants, and it contains proteins that can irritate the nose, throat and eyes. With around 20 per cent of the UK affected by hay fever, pollen count spikes could result in large numbers of runny noses and watering eyes. Large parts of England have been forecasted a ‘Moderate’ risk of hay fever symptoms today.

The south-east, south-west, Midlands and East of England can all expect ‘Moderate’ pollen levels.

Meanwhile, Wales, Scotland and Northern Ireland were all forecasted a ‘Low’ pollen count.

At this time of the year, hay fever symptoms are likely to be caused by grass pollen, said the Met Office.

Around 95 per cent of all hay fever symptoms are caused by grass pollen, added charity Allergy UK.

If you have hay fever, you could be at risk of symptoms if you spend time outdoors during times of high pollen. 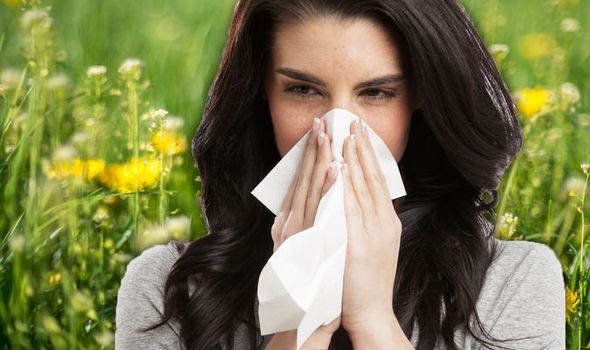 The condition also causes an itchy nose or throat, a cough, and may even lead to breathlessness.

Some patients may also experience a loss of smell, facial pain, earache, and tiredness.

But, the symptoms vary in severity from person to person and change depending on how much pollen is in the air.

“Hay fever is a common allergic reaction which occurs at particular times of the year,” said Allergy UK.

“These unpleasant and sometimes debilitating symptoms can be relieved by avoidance of the allergic triggers and the use of antihistamines. 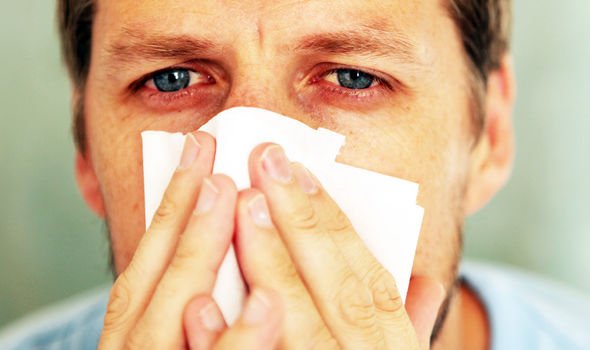 “Monitor pollen forecasts daily and stay indoors wherever possible when the count is high [generally on warmer, dry days].

“Rain washes pollen from the air so counts should be lower on cooler, wet days.

“On high pollen days, shower and wash your hair after arriving home and change your clothing.”

You could also lower your risk of hay fever symptoms by rubbing petroleum jelly around the inside of your nostrils to trap pollen.

But, you should speak to a doctor if your hay fever symptoms don’t improve, even after using over-the-counter medication.