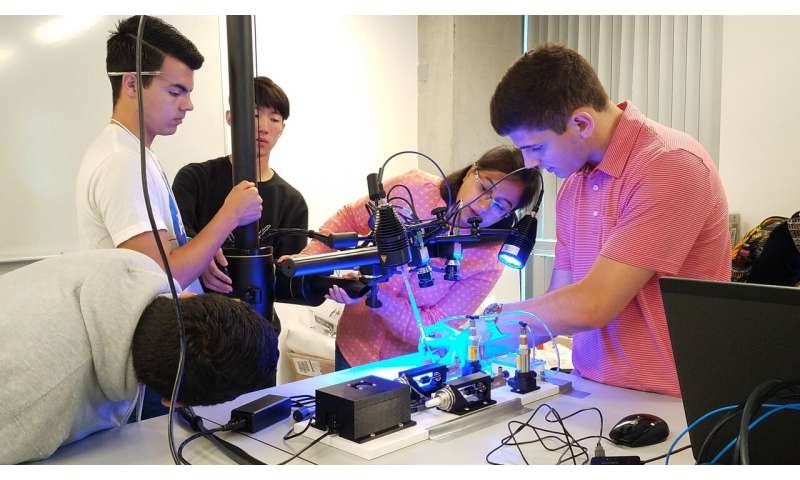 Take a deep breath. Now exhale. Congratulations! You’ve just done something completely ordinary, yet so mysterious that scientists still don’t know everything about it.

How oxygen and carbon dioxide enter and leave the bloodstream is well known, but scientists are just beginning to understand what happens to respiratory tissues as they expand and contract with every breath. The answers they find could help identify better ways to diagnose and treat lung diseases, including the deadly illnesses associated with vaping, cigarettes, and/or air pollution exposure.

Stiff collagen and stretchy elastin, tissue fibers packed together in rows, enable lungs and other parts of the respiratory system to stretch and snap back into shape. Damage to these fibers from environmental contaminants such as air pollution contributes to diseases like chronic obstructive pulmonary disease, or COPD, and asthma. Scientists had previously thought these fibers govern the mechanics of the airways due to their composition.

New research published by University of California, Riverside BREATHE Center collaborators Mona Eskandari, an assistant professor of mechanical engineering and Tara Nordgren, an assistant professor of biomedical sciences; and Grace O’Connell, an associate professor of mechanical engineering at UC Berkeley, has instead observed differences in the shape and form of the tissue fibers from proximal to distal airways, influencing respiratory elasticity.

The researchers, led by Eskandari, stretched the airways of pig lungs obtained from a slaughterhouse and observed the tissue stress response. In addition to measuring the biochemical composition of the tissue, they also made detailed microscopic observations. In some parts of the respiratory tract, such as the trachea—the “windpipe” that transports air from the nasal passages to the lungs—collagen and elastin fibers were seen to have a crimped, “Z” shape, while in smaller airways they were straight.

Overall, the experiments correlated with mathematical models accounting for fiber structural reinforcement, the first predictions of tissue behavior throughout the bronchial tree.

One surprising result stood out.

“We were shocked to not find definitive trends between our models and fiber content but rather in microstructural shape, suggesting the mechanics to be governed by morphology,” Eskandari said. “Similar to having a wavy versus straight spring, the former exhibits more flexibility. We think this explains why our previous experiments on smaller airways were found to be stiffer.”

The results show the importance of linking mathematical models with the real tissue structure in order to understand how lungs function in health and illness, and suggest that changes to the shape of the fibers might contribute to lung disease.

The researchers are now conducting extensive studies to measure the waviness of these fibers. These findings have broad implications. They will help scientists better understand a variety of lung diseases, from chronic lung diseases such as COPD—a leading cause of death in the U.S.—to the strange lung ailment associated with vaping that has so far affected nearly 1,500 people and killed 33.

“The chemical compounds inhaled during vaping, as well as in other environmental exposures, can cause direct and indirect damage to the lungs,” said Nordgren. “This damage, especially if not appropriately repaired, can lead to alterations in the lungs including the collagen and elastin components that alter the lung’s functional capacity.”