Finally, something you can DO with your genetic results! Popular DNA test 23andMe partners with weight loss app to offer personalized motivation – but experts are skeptical

Now, 23andMe customers can use their genetic data to enhance a personalized weight loss AI app, the company announced today.

The direct-to-consumer DNA test company will work with Lark Health, the maker of an app that provides algorithmically determined guidance to people hoping to lose weight and avoid diabetes.

Apps are all the rage in wellness and personalized medicine is often touted as the future of health care.

So far, 23andMe has been at the forefront of this movement, and the subject of scathing criticism that the information it provides merely scares consumers – who have a limited understanding of the complex science of genetics – without any proven benefits.

The newly-partnered companies insist that their collaborative tool will solve their mutual problems: give 23andMe users something to do with their data and give Lark users more personalized motivations.

But experts – and even 23andMe itself – say we really don’t know enough about the genetics of obesity to use DNA to design tailor-made diet and exercise plans. 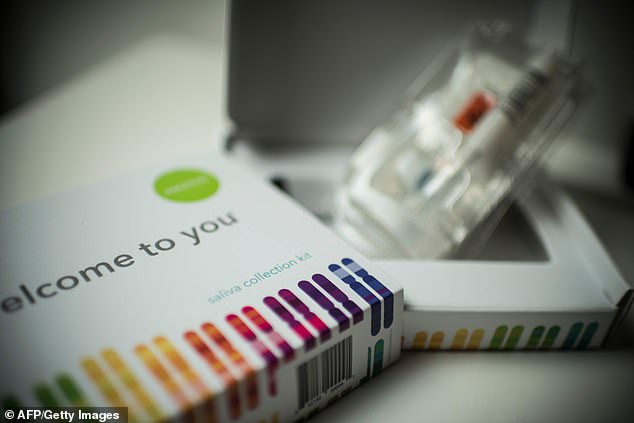 23andMe is partnering with Lark, a weight loss coaching app, to use consumers’ genetic information to personalize Lark and remind them of their motivations to get healthy

There are an estimated 76 genetic variants with known links to obesity.

But that is barely a drop in the bucket of the 88 million variations of the human genome.

Still those genetic factors play an important role, and the more of those 76 risk factors a person has, the more difficult it will be – even with a reasonably good diet and exercise – to avoid becoming overweight.

Plus, genetic variation is at least a part of why a diet and exercise plan that works for one person may not work for another.

Biotech and wellness companies want to provide tailored plans to their customers.

Lark was developed with the help of Harvard University and Stanford University reasearch on health and behavior, has been downloaded by more than one million people and garnered praise from Vogue as a ‘cheerleader and coach and ultimately feels like a friend.’

Apple, whose app store sells subscriptions for $20 a month, is a big fan too.

It is essentially an automated chat bot, that monitors things like your physical activity, nutrition and sleep and is supposed to coach you toward incrementally better habits.

But it only knows what you tell it (and the data you allow it to gather), and is minimally ‘personalized’ in the scientific sense – despite its constant digital chatter.

23andMe has the opposite problem. It tells you a wealth of information that is unique to you – but not much about what to do with that information.

At first brush, it might sound like all that genetic information needs is a plan to be applied to and perhaps a cheery bot to remind you to stick to it.

But many experts are not convinced.

Interest in nutrition research first started to ramp up in the 1940s. In the last couple of decades, its become a hot topic.

Similarly, 2000s became the ‘genomic era’ and in less than 20 years our understanding of DNA and its effects on our health and who we are has deepened enormously. 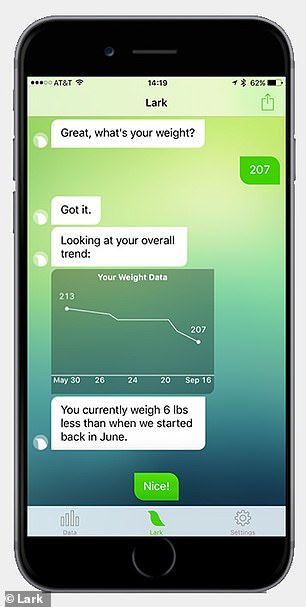 Lark’s chatbot takes user data and uses it to track progress and encourage weight loss. Now, it can use 23andMe genetic results as personalized motivation

But that doesn’t mean we have the specifics worked out.

‘We still don’t have the ability to accurately predict the most healthy diet for an individual … with or without the use of genomics,’ Dr Rasmus Nielsen, a University of California, Berkeley, geneticist told Vox.

In fairness, 23andMe don’t pretend to be able to do that.

They know ‘the science isn’t quite there yet,’ Dr Alisa Lehman who led the development of the new product on behalf of 23andMe.

‘Genetics is one additional layer on top of everything else that makes you unique, and it’s not the only layer of customization, [but adds] reminders and motivations for certain goals and why they might be particularly important for you,’ she said.

If you log the fact that you’ve just drunk a glass of milk in the Lark app, but your linked  23andME genetic data suggests you might be lactose intolerant, the cheaper $19.99 per month Lark wellness app might then ask if you’ve developed any symptoms, or caution you against drinking more.

The collaborative program might go a step further if you sign up for its more expensive, $31 per month – but possibly insurance covered – diabetes prevention program.

In that case, the app might say to you: ‘”hey, you ate a big piece of fatty meat, you have a genetic factor that makes eating that a risk factor for diabetes. Maybe next time try something leaner,”‘ says Dr Lehman in a loose impersonation of the app.

‘It’s reminding the user of what they learned with their 23andMe data … and how that might be influencing the suggestions [Lark] is making.’

The collaboration is an early response to a common complaint for 23andMe consumers.

‘People were asking us what to do with these results, and this is a step in the right direction,’ says Dr Lehman.

She says that, in consumer testing, people were pleased with how this first collaboration ‘took their genetic results to the next level.’

But it remains to be seen whether or not the genetically-enhanced life coach app will take users’ health and wellness to the next level.