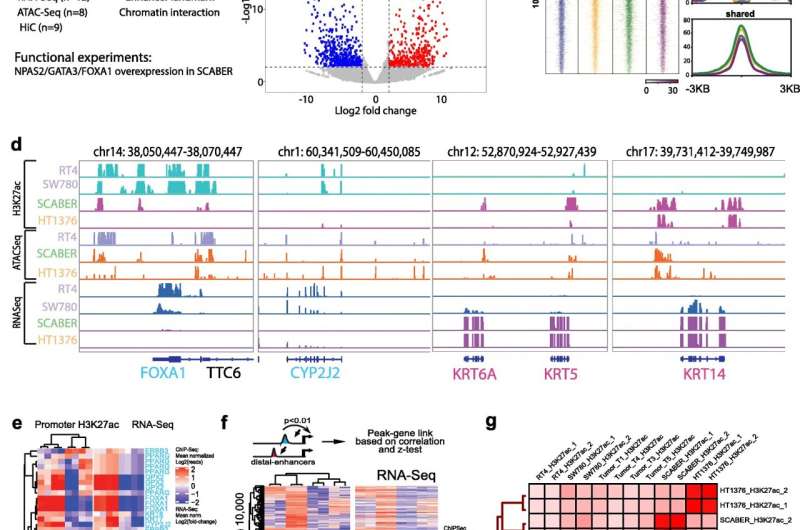 For the first time, scientists have examined how the three-dimensional (3D) structure of a patient’s genome can contribute to bladder cancer and pediatric brain tumors, according to a pair of Northwestern Medicine studies published in Science Advances and Genome Biology.

Within each cell, two-meter-long DNA needs to be properly folded and organized so that it can fit inside the nucleus, which is usually only a few micrometers in diameter. On many occasions, DNA forms “loops” that bring together genomic elements that are usually very far apart when the entire genome is unfurled. Some of these loops can lead to deleterious oncogene activation, and these studies help identify new therapeutic opportunities, according to Feng Yue, Ph.D., the Duane and Susan Burnham Professor of Molecular Medicine, senior author of the Genome Biology study and co-senior author of the Science Advances study.

“The unique 3D structure of cancer genomes can help us investigate what to target, both for biomarkers and for therapy,” said Yue, who is also an associate professor of Biochemistry and Molecular Genetics, of Pathology and director of the Center for Cancer Genomics at the Robert H. Lurie Comprehensive Cancer Center of Northwestern University.

The 3D structure of chromatin influences the progression of bladder cancer, according to a study published in Genome Biology. There are two major subtypes of muscle-invasive bladder cancer: basal and luminal. Luminal cancer is less aggressive, while basal cancer invades nearby tissues and is associated with worse survival. The two subtypes of bladder cancer have unique gene expression profiles and epigenetic signatures that could be used as a biomarker according to Yue, who is also the director of the Center for Advanced Molecular Analysis at the Institute for Augmented Intelligence in Medicine.

“By measuring this signature, you can have an estimate of whether their disease outcome is likely to be better or worse,” Yue said.

In the study, Yue and his collaborators profiled and analyzed epigenomic features and chromatin loops in multiple patient samples of each subtype, defining a unique regulatory signature. These loops often bring the distant regulator to their target genes, and each subtype has specific loops that regulate critical oncogenes in that subtype, according to Yue.

“They need to be linked in 3D space and talk to each other,” Yue said.

From these findings, the scientists identified more than 7,000 epigenetic regulatory elements, establishing an epigenetic profile for each subtype. Furthermore, the scientists also identified a novel regulatory gene, named NPAS2, that was highly associated with the luminal subtype. Patients with high NPAS2 expression had better survival, and this regulator could be used as a biomarker to determine the course of treatment or even perhaps to try and modify disease progression, according to Yue.

“We might be able to manipulate NPAS2 and other key regulators so that we can induce cancer subtype switching, which will have a profound influence on cancer patients prognosis and treatment,” Yue said. “That’s what we’re working on now.”

Abnormal chromatin loops have been linked to diffuse intrinsic pontine glioma (DIPG), a deadly pediatric brain cancer, according to the authors of the study published in Science Advances. Juan Wang, a third-year student in the Driskill Graduate Program in Life Sciences (DGP), was lead author of the study.

Most of the time, chromatin is condensed within the nucleus of a cell. During cell division, chromatin is unpacked to facilitate DNA replication and gene expression. However, some of that three-dimensionality is maintained during the “unpacking” process.

In normal cells, there is a baseline amount of these interactions, or chromatin loops. But when examining DIPG cells, the investigators discovered many more looping events. Notably, they measured a change in the proportion of the DNA that was crumpled versus that which was open to being read. Essentially, they found DNA being taken out of “storage” unnecessarily, contributing to new genetic interactions that help cause cancer.