A beer a day could keep your diabetes at bay: Scientific review finds drinking alcohol in moderation can ‘improve glucose metabolism’

Drinking a pint of beer or glass of wine each day could keep type 2 diabetes at bay, according to a scientific review.

Type 2 diabetics have an impaired ability to break down glucose, which causes high blood sugar, insulin resistance and weight gain.

Critics have slammed the Chinese researchers’ bold statement that alcohol guidelines for diabetes should be reviewed.

Alcohol can cause dangerous changes in blood sugar levels and the sugar content can lead to obesity – a key driver for type 2 diabetes. 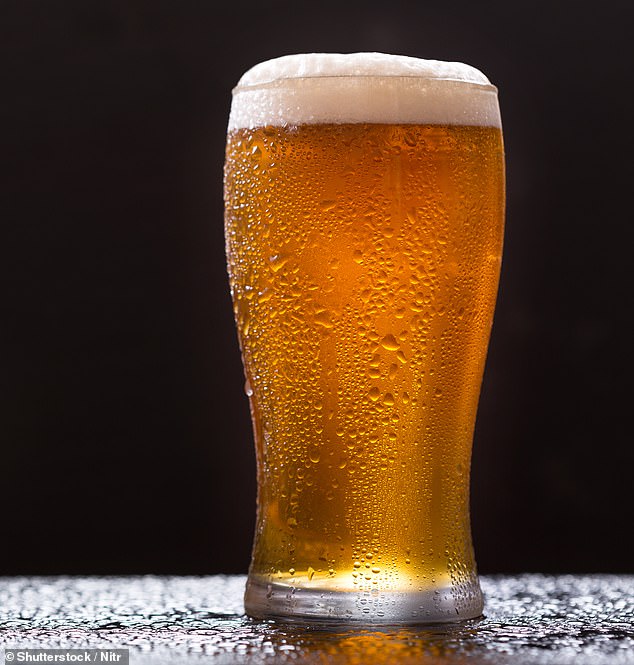 A beer or large glass of wine a day could keep type 2 diabetes at bay, according to a scientific review by researchers in China

The study, yet to be published, was presented at the Annual Meeting of the European Association for the Study of Diabetes in Barcelona.

Men and women are advised not to drink more than 14 units a week on a regular basis.

One unit equals 10ml or 8g of pure alcohol, which is around the amount of alcohol the average adult can process in an hour.

A pint of strong lager contains 3 units of alcohol, whereas the same volume of low-strength lager has just over 2 units.

High glucose levels, caused by an inability to respond to insulin, prompts the pancreas to produce even more insulin.

Alcohol consumption was also found to be linked to lower levels of triglycerides, the most common type of fat found in food.

Having a high level of triglycerides, which is often caused by poorly managed type 2 diabetes, is a risk factor for heart disease.

There was no significant effect of alcohol on fasting blood glucose levels or glycated haemoglobin.

Fasting blood glucose levels is used to test for type 2 diabetes, with higher levels indicating the body is not using insulin effectively enough.

Glycated haemoglobic, also known as HbA1c, is an indicator for glucose control over a long period of up to three months.

Total cholesterol, including ‘good’ and ‘bad’ cholesterol, also stayed the same. It is important for people with diabetes to have balanced cholesterol levels – and good overall health – to prevent complications such as heart disease.

‘[The] findings of this meta-analysis show a positive effect of alcohol on glucose and fat metabolism in people with type 2 diabetes,’ Dr Yuling Chen and colleagues said.

‘Larger studies are needed to further evaluate the effects of alcohol consumption on blood sugar management, especially in patients with type 2 diabetes.’

Light to moderate drinking was defined by the authors as 20g or less of alcohol per day – 2.5 units.

Two units a day are recommended by current UK alcohol guidelines, which are the same for diabetics as the general population.

There are 3.8million people living with a diagnosis of diabetes in the UK, and 90 per cent of those have type 2.

Naveed Sattar, professor of metabolic medicine at University of Glasgow, said: ‘The most robust data anywhere, published in 2018, suggest the lower the amounts of alcohol consumed, the lower the risks for multiple heart and stroke related outcomes.

‘Hence, less, not more alcohol should be the constant message and this includes in people with diabetes.’

It’s not clear at this stage whether the positive effects were due to the chemicals in the alcohol or other factors.

Dr Sadie Boniface, of the Institute of Alcohol Studies, said: ‘It’s possible this could be due to the alcohol (ethanol) content, but it could also be due to other compounds in the drinks people were given.

‘Any benefits would need to be weighed up against all the other health risks of alcohol use, for example the increased risk of cancers even at low levels of drinking.

‘It’s difficult to draw any conclusions at this stage.’

Douglas Twenefour, deputy head of care at Diabetes UK, said: ‘While these findings suggest potential benefits from light to moderate alcohol consumption, we do not recommend people with type 2 diabetes see these findings as a reason to start drinking if they do not already.

‘Diabetes UK recommends that people, whether they have diabetes or not, use the government’s guidelines as a guide for their alcohol intake.’

Experts were also skeptical of the studies’ methodology, considering it is yet to be peer-reviewed or published in a journal.

Kevin McConway, emeritus professor of applied statistics at The Open University, said it is too early to apply the study findings to real life.

He said: ‘[Two studies of the ten] involved the participants drinking 40g of alcohol, that’s five UK units, of vodka in one case and in an unstated form in the other. They did not do that every day.

‘In one of the studies they did it just once, and in the other it was on special study days at least a week apart.

‘How does it make sense to combine these with other studies where the participants, in some cases, drank red wine along with normal meals?’

Dr Bob Patton, of the drugs alcohol and addictive behaviours research group at the University of Surrey, said: ‘Any findings should be interpreted with caution.

‘The authors suggest that based upon these findings, recommendations to moderate alcohol consumption for people with type 2 diabetes may need to be reviewed. In the UK this is not necessary.’

HOW CAN ALCOHOL BE DANGEROUS FOR DIABETES?

The relationship between alcohol and risk of type 2 diabetes can be a little bit complicated, therefore Diabetes UK recommend staying within government guidelines for alcohol consumption – which is 14 units per week.

Alcohol can also it can contain a lot of calories, which can lead to putting on weight, with obesity as a lead factor for type 2 diabetes.

Patients who use insulin and some medications are more likely to have a hypo – which is when blood sugar levels drop dangerously low.

Drinking alcohol can then add to this, particularly on an empty stomach, because it causes your blood sugar levels to spike or drop.

Some evidence suggests a low carbohydrate diet is efficient for managing type 2 diabetes.

If a diabetic os carb counting, drinking can make it a lot more tricky because they contain carbohydrates. But more insulin may not be needed, depending on whether the person is eating or dancing, too.

Diabetes UK recommend to speak to your health advisor and: