When it comes to overt racism, nobody is exempt from being called out. Take it from this bride, who confronted her father and had him escorted out of her wedding after he made an anti-Asian remark toward her Korean-Filipino husband and mother-in-law.

Newlywed Reddit user @St4ry_ took to the /AmITheAsshole Subreddit for some unbiased opinions on a situation she had been wanting to get off her chest “for a while.” She is Black; two months ago, she married her husband, who is half-Korean and half-Filipino. She invited her closest family members to the wedding, including her mom, her sister, and her dad, all of whom are also Black.

The ceremony went as planned, but things took a turn later, when the bride went to the food station for a bite to eat with her father. Her now-husband and mother-in-law were there, too.

“When my dad saw my mother-in-law, he asked in a very stereotypical Asian accent, ‘What is in this [food], bats or cats?’ and then laughed,” the bride recalled. Naturally, she was appalled: “My mother-in-law and husband were shocked, [and] so was I. I told him, ‘That’s very offensive, racist, and made my in-laws uncomfortable.’”

Unfortunately, her father did not take the note. “He then went on making a scene,” the bride said, “so I called security to escort him out.” Her father has been taunting her ever since, texting her “awful things” about her husband and their future children.

Even though @St4ry_’s mother assured her that she did the right thing, she is still concerned that she was “the asshole” in this situation. Reddit users were universally on her side — and rightfully so! 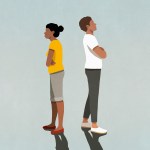 “NTA,” one Redditor wrote. “I’m so sorry that he did that on your wedding day. You did the right thing and hopefully your dad will apologize sincerely for what he did.”

Many users also stressed that her father being Black in no way absolved him for being blatantly anti-Asian.

“You are NTA,” said one commenter. “Your father knew that your husband was Asian long before the wedding to know how to conduct himself and express his views prior to your getting married or have the integrity to choose not to come. He made a choice to stand up on his own ass at your wedding. … Don’t buy into the lack of accountability in his narrative.”

“Unfortunately, some POC think it’s [okay] to make these kinds of ‘jokes’ and don’t think it’s racist,” added another. “It is, and they need to be called out. Maybe Dad will understand when he loses his relationship with his daughter and grandchildren. It might be too late, but he needs to learn that it’s not [okay]!”

Before you go, check out the mental health apps we swear by for giving your brain some TLC: