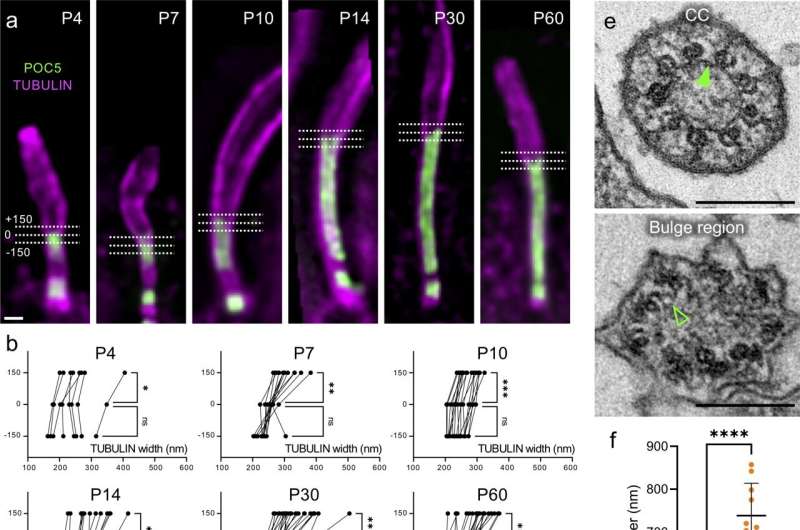 Retinitis pigmentosa, a degenerative genetic disease of the eye, is characterized by progressive vision loss, usually leading to blindness. In some patients, structural defects in the photoreceptor cells have been observed, but the molecular mechanisms involved are not understood. A team from the University of Geneva (UNIGE), in collaboration with the University of Lausanne (UNIL), has identified the essential role played by a molecular zipper formed by four proteins. The absence of this zipper leads to cell death in retinal cells. This discovery could lead to the development of therapeutic approaches for retinitis pigmentosa. This work can be read in the journal PLOS Biology.

Retinitis pigmentosa is the most common hereditary retinal disease in humans, with a prevalence of one in every 4,000 people worldwide. The first symptoms usually appear between the ages of 10 and 20 with a loss of night vision. Thereafter, the visual field narrows into a “tunnel vision” to finally lead to blindness around the age of 40. This disease is characterized by a degeneration of the light sensitive cells, the photoreceptors.

These specialized neuronal cells of the retina are responsible for the conversion of light into a nerve signal. The outer segment of the cell is made up of stacks of disks on which the light-sensitive pigments are located. The inner segment contains all the metabolic machinery essential to the functioning of the cell and is linked to the outer segment by the connecting cilium.

Mutations in the genes of four proteins located in this connecting cilium are all associated with retinal pathologies presenting degeneration of photoreceptors. These four proteins had been identified by the laboratory of Paul Guichard and Virginie Hamel of the Department of Molecular and Cellular Biology of the Faculty of Science. They are located in centrioles, cylindrical structures made of microtubules and present in all animal cells.

“In the centriole, these proteins ensure the cohesion of the different microtubules by acting like a zipper. We wondered if they did not play the same role in the tubular structures of the connecting cilium,” explains Virginie Hamel, last author of the study.

Thanks to an expansion microscopy technique optimized by the group of Virginie Hamel and Paul Guichard, which allow cells to be inflated without deforming them, the scientists were able to observe retinal tissue with a resolution never achieved. The biologists focused on the structure of connecting cilia from mice that had—or did not have—a mutation in the gene for one of the four mentioned proteins. These observations were conducted at different life stages. “In the absence of the mutation, we found that these proteins ensure, just as we had previously seen in centrioles, the cohesion between microtubules by forming a zipper that closes as development proceeds,” explains Olivier Mercey, researcher in the Department of Molecular and Cellular Biology and first author of the study.

On the other hand, when the gene for this protein is mutated, although the structure of the microtubules appears normal in the first days, the microtubules gradually become less and less attached to each other. In adulthood, the affected mice have microtubules that are no longer “zipped” together at all and eventually collapse, leading to cell death of the photoreceptors.

This work has led to a better understanding at the molecular and structural level of retinitis pigmentosa, which allows to consider therapeutic treatments that act upstream of cell degeneration.