You might find living with a partner who doesn’t listen leaves you short-tempered.

But it could also shorten your life, according to researchers.

People whose partners are less attentive appear to struggle to manage their daily stress and emotions over the long term, a study has found.

And the build-up of stress could be enough to make them up to 42 per cent more likely to die prematurely.

Chronic stress is linked to the six leading causes of death – heart disease, cancer, lung ailments, accidents, cirrhosis of the liver and suicide – according to the American Psychological Association. 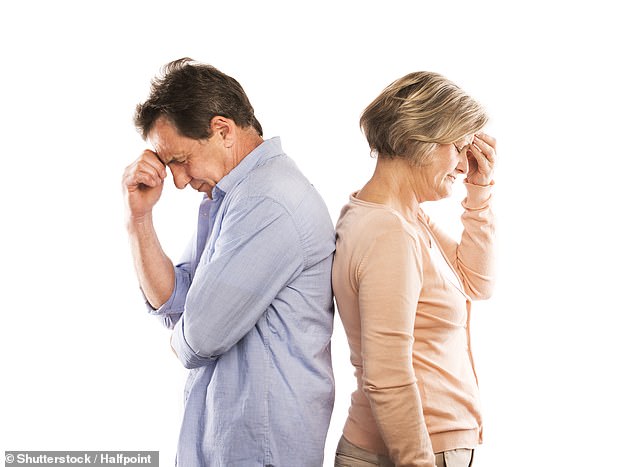 A partner who doesn’t listen to you could ruin your health and even put you at a higher risk of an early death, a study at the University of Edinburgh suggests

A team of psychologists at the University of Edinburgh assessed a group of around 1,200 people aged 25 to 74 who had a spouse or lived with their partner.

Lead researcher Dr Sarah Stanton said: ‘The results suggest that if people have someone they can turn to – and whom they think supports them – then it can help them deal with the stresses of everyday living.

‘This has downstream associations with later health outcomes.’

Participants were assessed over a 20-year period starting between 1995 and 1996 as part of the National Survey of Midlife Development in the United States (MIDUS).

They were asked to rate how much they thought their partner understood, cared about and appreciated them.

After 10 years, in 2006, participants responded to the same questions.

They also filled out reports over an eight-day period, recording any daily stressful events – such as problems at home or work – and their emotions in response.

Researchers found that people who didn’t respond well to every day stress were the ones who felt their partner had become less caring over the past 10 years.

And they found people who reported their partner had become less responsive ended up with a 42 per cent higher risk of dying within 20 years of the study.

Mindfulness reduces stress levels by more than half by changing the structure of the brain, research revealed in October 2017.

Mindfulness, which involves paying attention to the present moment, relieves tension by 51 per cent by boosting regions of the brain associated with attention, function and compassion, a study found.

The ancient Buddhist meditation, which is championed by the likes of Gwyneth Paltrow and Emma Watson, and is even recommended by the NHS, also makes people feel better within themselves, the research adds.

In particular, practicing mindfulness by sharing challenging experiences with others may help to reduce social shame, which is a common trigger for stress, according to the researchers.

Lead author Professor Tania Singer from the Max Planck Institute of Human Cognitive and Brain Sciences in Germany, said: ‘As empathy, compassion and perspective-taking are crucial competencies for successful social interactions, conflict resolution and cooperation, these findings are highly relevant’.

The scientists said this link could be explained by those people’s reduced ability to deal with negative emotions caused by daily stress, possibly because their partner was unable to lend an ear.

Although the findings, published in the journal Psychosomatic Medicine, were described by the team as small, they may have an impact when put into a bigger picture.

The Edinburgh team said: ‘The effect sizes of other behaviours (e.g., exercise, fruit, and vegetable consumption) and health are also small, as noted in a recent meta-analysis of marital quality and health.

‘Thus, the associations found in this research are small but potentially mighty when put in context with other health behaviours.’

Dr Stanton said the findings are among the first to investigate how long-term changes are an important sign of relationship quality and health effects.

The researchers didn’t detail how struggling to deal with stress could increase the risk of dying, but chronic stress is known to contribute to damage the body in various ways.

It has previously been shown to change gut bacteria, increase blood pressure and therefore the risk of stroke and result in higher levels of the hormone cortisol, which increases glucose production and limits the effect of insulin, potentially leading to worse prognosis for diabetics.

Stress also triggers production of the hormone oestrogen, which can accelerate breast cancer.

Danish researchers discovered in 2014 that individuals who argue and disagree for petty reasons are two to three times more likely to die young.

Stress, hostility and depression put older people at much greater risk of suffering a stroke, a study in 2014 by the University of Minnesota warned, with chronic stress raising the risk of a ‘mini’ stroke, also known as a transient ischaemic attack (TIA), by 59 per cent.

A study conducted by Oregon State University in 2011 found that individuals who experience two or more stressful events in a year have a 50 per cent higher chance of dying.

The study, published in the Journal of Aging Research, followed 1,000 men over an 18-year period, from 1985 to 2003, looking at stressful events that typically occur more frequently at a middle or older age, such as a death in the family.

Anything more than two stressful events per year was seen to be harmful, as individuals in both the moderate and high risk stress groups had a much higher mortality rate than individuals in the low risk group.