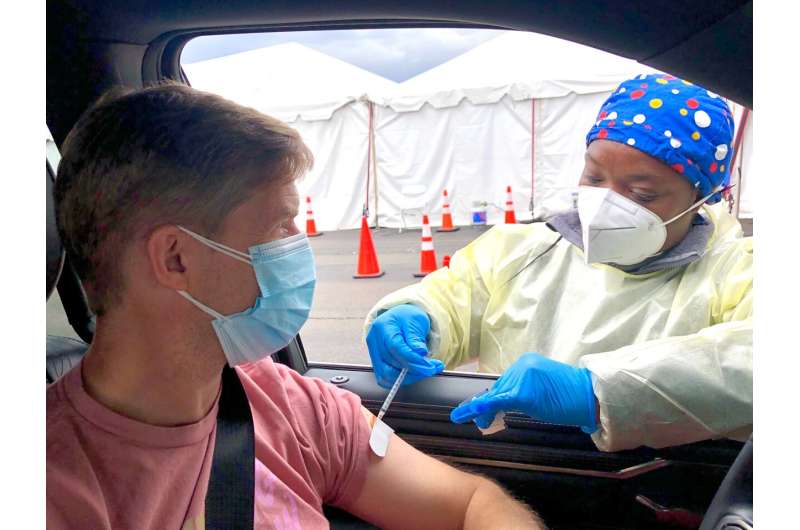 President Joe Biden’s orders requiring vaccinations for about two-thirds of the U.S. workforce add to a patchwork of vaccine mandates aimed at pushing more people to get their shots and bring the pandemic under control.

The president had largely resisted issuing federal mandates, but in recent months, many states, companies and schools have issued their own mandates in order to inoculate reluctant or resistant Americans.

Currently nearly 80 million vaccine-eligible Americans have yet to get a single dose, according to the White House. Health experts believe this helped the delta variant thrive in many parts of the country over the summer.

“The unvaccinated overcrowd our hospitals … leaving no room for someone with a heart attack or pancreatitis or cancer,” Biden said in a speech on Sept. 9, 2021, announcing the new orders. “We’ve been patient, but our patience is wearing thin. And your refusal has cost all of us.”

I’m a law professor who has written about the legal questions around vaccination laws. While it’s unclear how many people in total are covered by the overlapping vaccine mandates, they most likely now affect a significant majority of eligible Americans.

The newest vaccine requirements cover over 100 million workers in total—and it’s unknown how many of these people remain unvaccinated.

The biggest part of Biden’s orders involve having the Occupational Safety and Health Administration develop a rule that companies with 100 or more employees ensure their workers are fully vaccinated or are tested weekly for COVID-19. Although less than 2% of U.S. companies have 100 or more employees, according to recent Census data, they employ over 80 million workers.

The penalty for noncompliance could be fines for the employer of up to US$14,000 per violation.

Biden will also require federal employees, government contractors and health care workers who treat patients on Medicare and Medicaid to get vaccinated—about 20 million people—with no option to undergo frequent testing instead.

In addition, the new plan urges large entertainment venues like concert halls and sports stadiums to require proof of vaccination for entry and demands companies provide workers with paid time off to get their shots and to recover from possible vaccine-related side effects.

Approximately half of U.S. states have enacted their own COVID-19 vaccine mandates. And in some cases, exemptions may be allowed for medical or religious reasons.

While these mandates differ from state to state, provisions typically cover some combination of government employees and contractors, health care workers, teachers and employees in state-operated settings such as prisons. The majority of these state mandates permit frequent testing and mask-wearing as an alternative to vaccination.

These statewide vaccine mandates exist almost exclusively in states with Democratic governors. While Maryland, Massachusetts and Vermont, all of which are led by Republicans, also have vaccine mandates, their populations tend to lean liberal.

California and New York City have some of the most rigorous mandates. California, for example, appears to be the only state that requires proof of vaccination of a negative COVID-19 test to attend an indoor event with 1,000 or more people. New York City requires vaccination for an even wider variety of indoor venues, including restaurants and gyms, regardless of how many people are there.

About 20 states, all of them led by Republican governors, have taken the opposite approach and prohibited vaccine mandates either through legislation or executive orders. Policies vary, but they typically prohibit state agencies from implementing any type of COVID-19 vaccine mandate, prohibit private companies from requiring their customers to be vaccinated, or both.

Montana is currently the only state that prohibits private employers from mandating the vaccine for their employees.

The new federal vaccine mandates would preempt some of these state laws and are likely to face legal challenges.

Many educational institutions have also played an important role in mandating the vaccine.

Over 1,000 U.S. universities have some form of a vaccine mandate for students, employees or both, including many large public universities. Beyond the usual exemptions for medical or religious reasons, some of these mandates also exclude students learning entirely remotely.

In August 2021, the United States Supreme Court refused to block Indiana University’s vaccine mandate that covered virtually all students and employees and included both religious and medical exemptions. For that reason, I believe similar vaccine mandates at other universities will also likely withstand constitutional scrutiny.

At the grade school level, just two states, Oregon and Washington, have mandated the COVID-19 vaccine for almost all K-12 school employees, while another seven require that teachers and other employees either be vaccinated or undergo regular testing.

In most states, however, vaccine mandates are being determined at the local level—some cities or districts are passing mandates despite a state law that explicitly prohibits them. An ongoing survey of 100 large urban school districts around the country found that a quarter require teachers to be vaccinated.

Los Angeles is the only major school district in the country that requires eligible students 12 and older to get vaccinated against COVID-19.

Vaccine mandates for schoolchildren are hardly new, however. Prior to the pandemic, every state in the nation had some form of mandatory vaccination requirement for K-12 students.

Before the new rule covering private businesses, many companies had already decided to require their workers receive their shots.

Earlier in the year, the Equal Employment Opportunity Commission gave companies the green light that they could adopt mandatory vaccination policies as long as they remained in compliance with antidiscrimination laws.

While companies were initially slow to require vaccines, that changed recently after the Food and Drug Administration gave full approval to the Pfizer vaccine on Aug. 23. Dozens of businesses, including Walmart, Goldman Sachs and Google, now require employees to be vaccinated.