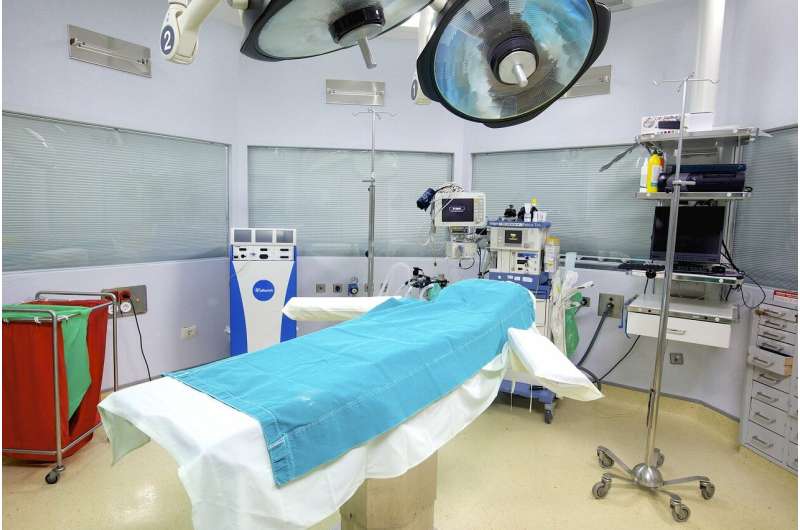 Accidental awareness occurs when a patient is temporarily conscious during a general anaesthetic and can remember things that happened during surgery, perhaps feeling pain or being unable to move. More commonly however, awareness occurs during the transition at the very start or end of a general anaesthetic (i.e. before and after surgery), as the patient is going to sleep or waking up. Although accidental awareness during general anaesthesia is rare, and the experiences usually only lasted for a few seconds or minutes, the complication remains an important concern for both patients and anaesthetists.

A new study published in Anaesthesia (a journal of the Association of Anaesthetists), shows that 1 in 256 women undergoing pregnancy-related surgery, including caesarean section, under general anaesthesia experienced awareness—a figure much higher than reported before. A national audit into accidental awareness (NAP5) in 2014 indicated that approximately 1 in every 19,000 patients undergoing general anaesthesia spontaneously reported accidental awareness to medical staff. Although this incidence varied for different types of surgery and patient subgroups, the infrequency of reports was reassuring.

This new research was driven by the suggestion from NAP5 that women having caesarean section, or other surgery at childbirth, may have a higher incidence of awareness. The researchers studied over 3,000 women having general anaesthesia for obstetric procedures in 72 NHS hospitals in England and found 12 reports of awareness: seven (58%) patients were distressed and five (42%) felt paralysed (that they were unable to move, which may occur due to the common use of drugs to relax muscles during general anaesthesia for pregnant women). Two women (17%) felt paralysis with pain. Other sensations included tugging, stitching, feelings of dissociation and being unable to breathe. Longer term psychological harm often included features of post-traumatic stress disorder.

Dr. Peter Odor, Project Lead and Consultant Anaesthetist at University College Hospital in London, explained: “This research is patient-focussed throughout. We identified a complex range of risk factors for awareness, including drug types and variations in practice. Although the incidence of awareness during caesarean section is much higher than that in the general surgical population, it is important to emphasise that general anaesthesia remains safe and around half the patients that experienced awareness did not find it distressing. Although we have provided many answers, questions remain as to exactly why awareness is more common in pregnant women; our next steps are to apply the lessons learned from this study to help reduce risk in the future.”

Co-author Dr. Jaideep Pandit, Professor of Anaesthesia at Oxford University Hospitals NHS Foundation Trust, UK, and lead author of the previous NAP5 study commented: “This project takes forward previous research findings. The issue of consent is especially important, as the incidence we find is similar to that for other complications which we would normally warn patients about.”

Dr. Nuala Lucas, co-author and Consultant Obstetric Anaesthetist at Northwick Park Hospital, London, UK, adds: “This is the biggest ever study of this complication in women and has been able to contribute to our understanding of the condition. We found an association with certain anaesthetic drugs (thiopentone) and muscle relaxants. Factors such as emergency operations out-of-hours (late at night) were also associated with awareness.”Co-author Jackie Andrade, Professor of Psychology at the University of Plymouth, commented: “Post-traumatic stress disorder typically develops when an event is perceived as life threatening and uncontrollable. Providing an explanation of what happened and high-quality support after an episode of accidental awareness during general anaesthesia can help reduce its psychological impact.”

Dr. Chris Elton, President of the Obstetric Anaesthetists Association and based at Leicester Royal Infirmary, UK, says: “This research sheds light on this extremely important issue for women undergoing general anaesthesia for caesarean section and anaesthetists providing it. Pregnant women undergoing general anaesthesia deserve high-quality information for the consent process and the highest standards of anaesthesia. This work will prompt further research and illustrates the urgent need for evidence-based guidelines in this area—the Obstetric Anaesthetists’ Association in conjunction with the Association of Anaesthetists have already started work on this. General anaesthesia is infrequently performed in obstetrics, and this complication is rare. Women who have concerns about this issue should contact their obstetric centre for information and support.”

Dr. Tim Meek of the Association of Anaesthetists and Consultant Anaesthetist at James Cook University Hospital in Middlesbrough, UK, said: “This research highlights an area in urgent need of evidence-based guidance to help anaesthetists select the safest anaesthesia for pregnant women. We have a long history of collaborating with the Obstetric Anaesthetists Association to produce internationally respected guidelines and we are looking forward to completing this new work.”

This study took place from May 2017 to August 2018, and analysed 3115 consenting patients receiving general anaesthesia for obstetric surgery in 72 hospitals in England. Patients answered three standardised questionnaires over 30 days, with responses indicating memories during general anaesthesia subsequently verified using detailed interviews and investigations into the circumstances of each awareness episode.

Accidental awareness occurred during the beginning (induction) and end (emergence) of general anaesthesia in nine (75%) of the 12 patients that reported awareness. Factors associated with accidental awareness during general anaesthesia were high (overweight) body mass index (BMI) (25-30 kg/m2); low (underweight) BMI (<18.5 kg/m2); out-of-hours surgery; and use of ketamine or thiopental for induction.

Regarding out-of-hours surgery, 10 of 12 patients with awareness (83%) underwent surgery during the night shift (20:00-07:59H), a far greater proportion compared with the non-awareness cohort in which only 1373 (44%) of patients had surgery at night.

The over-representation of the drug thiopentone to induce anaesthesia in the awareness cases is striking, say the authors. “Our data suggests that, compared with propofol, the risk of awareness is increased four-fold when thiopentone is used for induction of anaesthesia and 26-fold when ketamine is used. It has recently been suggested that, based on brain recordings, propofol induction maintains deeper anaesthesia than thiopental in pregnant women, so there may be a pharmacological basis to our observations. Regardless, it would now seem prudent to have a specific justification for the use of thiopentone or ketamine as induction agents in obstetrics, rather than consider these agents as default choices.”

The authors also consider a range of other possible explanations for the findings. “Apart from practice issues, other factors could be contributing to the cases of awareness in obstetrics. Childbirth is a time of heightened attention to surrounding events, such that brief episodes of awareness may be magnified in recall, as are other details of the birthing experience,” they explain. “Another possibility is that the hormonal changes associated with pregnancy influence memory, recall or even sensitivity to general anaesthesia and increase the likelihood of awareness.”