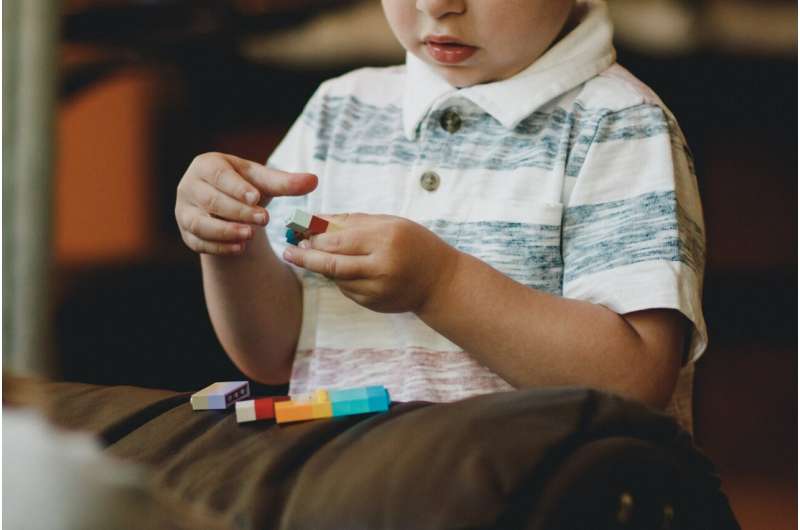 Results from a new study published today in Child Development provide the first longitudinal evidence about the trajectories of sensory reactivity patterns during early childhood among a large community sample with diverse developmental outcomes.

Many autistic children have particular preferences for specific sensory stimuli, like focused interest on the flicker of fluorescent lights, pronounced discomfort from a scratchy T-shirt tag or deep cravings for bear hugs, for example. And yet, while every child with autism has a unique sensory pattern, there is little research, either at the individual or population levels, documenting how those patterns shift throughout the stages of early childhood.

In 2013, a team of researchers from the University of Southern California and the University of North Carolina at Chapel Hill began following a cohort of more than 1,500 children, measuring their sensory patterns as the children grew from infancy to school age. Now, the researchers have generated insights into the associations between those sensory changes and various child and family characteristics, including the eventual emergence of autistic symptoms or an autism diagnosis once the children were six or seven years old.

“It’s a prospective study, which means we followed each child over six years to track their individual development,” said Yun-Ju (Claire) Chen Ph.D. ’21, the lead author of the Child Development article. “At the beginning, we didn’t know which children would develop autism. So it’s incredibly interesting to see that, once they were school age at the end of the study, autistic children’s sensory patterns followed very different trajectories, compared to children with neurotypical outcomes or those with other developmental conditions.”

For infants, sensory issues may be earliest signs of autism

For six years, as part of the North Carolina Child Development Survey project, the researchers followed more than 1,500 children born in North Carolina in 2013. Parents were asked about their child’s sensory behaviors during three childhood stages: at infancy (9–16 months old), at preschool (3–4 years old) and at school-age (6–7 years old). Parents were also asked about their child’s autistic symptoms, about various developmental concerns and whether or not their child had received any diagnoses.

Data analysis showed that the sensory patterns of autistic children, as well as children with autistic traits (but who had not been diagnosed with ASD), tended to grow stronger over time. In comparison, non-autistic children’s sensory patterns, including those with parent-reported sensory issues, were relatively steadier across development. That finding may have significant implications for the ways in which scientists conceptualize, identify and study autism, as well as how therapeutic interventions are designed and delivered, beginning in early infancy, to promote developmental outcomes and provide better supports for families.

Chen is currently a postdoctoral research fellow at McMaster University in Ontario, Canada, where she is working with the MacART McMaster Autism Research Team and the Pathways in ASD Study, one of the world’s largest and longest-running longitudinal studies of the development of autistic young children and adolescents who live in Canada. While at the USC Chan Division, she completed her occupational science Ph.D. in the Innovations in Neurodevelopmental Sensory Processing Research laboratory—also known as the insp!re lab—led by Associate Dean and Chair Grace Baranek. Chen and Baranek previously worked together at the University of North Carolina at Chapel Hill, and after coming to USC in 2016, continued using the North Carolina dataset and collaborating with their UNC colleagues.

Baranek is a co-author of the article, as is Research Professor John Sideris, USC Chan’s director of instrument development and psychometric/statistical analysis.

Chen notes how the study’s longitudinal design honors the individuality and variability of sensory development, regardless of diagnosis.

“Previous studies have tended to compare sensory patterns across different age ranges by aggregating all their cross-sectional data, which makes it hard to draw conclusions about any one specific participant,” Chen said. “But we know that every child has their own trajectory, so our type of data analysis really is a more person-centered approach.”

The researchers also discovered that children of parents with higher educational levels tended to show more stable or improving sensory patterns. While cautious not to misinterpret that finding, Chen says it may underscore the impact of early interventions upon children’s long-term sensory behaviors.

“My guess is that kids with more highly educated parents may have more access to resources, so that once they are identified with sensory challenges, they are more likely to get timely help from professionals,” Chen says. “Of course, we need to do more to decrease disparity for those with lower education levels. But I think this is a promising result because, in comparison to other variables that cannot be changed, early detection and intervention are variables that we can do something about, and that can make a really big difference in children’s and families’ lives.”

The research team is next studying how the launch of a new screening tool can improve the early identification of autism across diverse populations, including Spanish-speaking families primarily of Hispanic/Latino/a ethnicity living in the Los Angeles area.