Babies could be given an ‘obesity risk score’ at BIRTH: New algorithm can predict your genetic risk of weight gain

Doctors may soon give babies an obesity risk score thanks to a newly-developed inexpensive genetic test.

About two-thirds of Americans are overweight or obese, and scientists have long known that both DNA and lifestyle determine who will reach an unhealthy weight.

Now, researchers at Harvard University and the Broad Institute have identified genetic markers detectable using a $50 DNA test that can help doctors predict who obesity with unprecedented accuracy.

The test can’t provide complete certainty, but the 2.1 million genetic variants it uses could give families an early warning that their children need to stay active and eat well to minimize their inherited obesity risks.

And the study authors say a similar test may someday predict other complex conditions like heart disease, too. 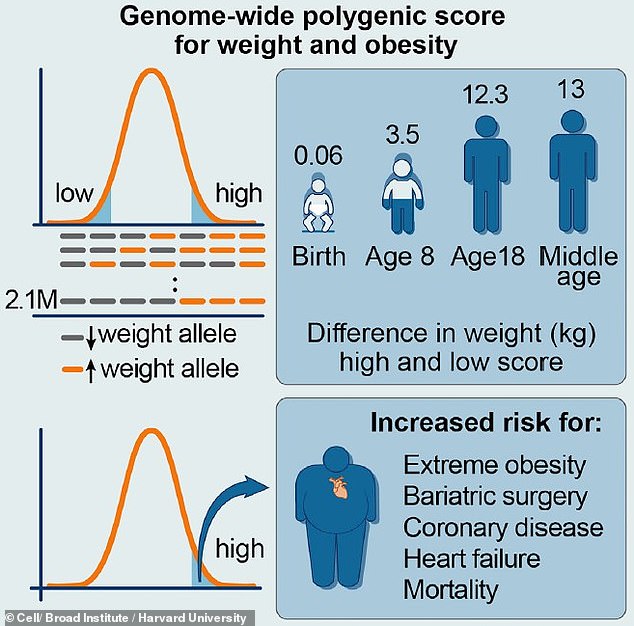 Since the 1970s, rates of childhood obesity have tripled in the US, and 80 percent of overweight children will grow up to be obese adults.

High BMI in childhood is a solid indicator of struggles with weight in adulthood, but there are overweight and obese adults who remained healthy weights throughout adolescence.

And, often, by the time a child first becomes overweight or obese, lifestyle factors that fuel weight gain are already habituated.

Previous research has shown that if someone has a genetic predisposition for obesity, being inactive or poor diet will have even more significant effects on their weight gain that these bad habits would have on people without obesity genes.

So the earlier someone can be identified as high-risk the better.

Since 2006, we’ve known with reasonable certainty that at least 50 genes are linked to obesity.

However, that hasn’t been enough to develop a practical standard test worth using to screen for obesity.

In the end, the identified just 140 genetic variants with particularly strong links to obesity risks.

Using the patterns they found in all that genetic information, the researchers found that they could accurately predict who would become overweight or obese in a sample of 3,000 babies, children and adults.

The genetic test results matched up with ‘striking’ differences in weight and height (and therefore BMI).

Babies that were genetically at risk for obesity didn’t have very drastically different birth weights, but by the time they were three years old, the distinctions predicted by the DNA test started to pan out.

And as those study participants got older, their BMIs only fell more and more closely in line with their genetic test results.

Co-author and fellow in Dr Kathiresan’s lab, Dr Amit Khera added: ‘We have always had a hunch that some people may have been born with a genetic profile that predisposes them to obesity, and we now confirm that this is both true and quantifiable.’

And predicting obesity may mean bring doctors a step closer to predicting conditions like heart disease, too, and thus to taking steps toward preventing them.

‘Although complex conditions such as obesity and heart disease result from both genetic and environmental factors, this means DNA is not destiny,’ says Dr Khera.

‘We are in the early days for figuring out how and when best to disclose genetic information and how we can best empower patients to overcome any genetic risks identified–but we are incredibly excited about the potential.’