Boy, 11, is diagnosed with brain cancer after his doctor, teachers and parents accused him of faking his stiff neck and tiredness for four months

A boy whose doctor, teachers and parents believed he was lying about being ill was diagnosed with a cancerous brain tumour.

Charlie Card, of Newcastle-upon-Tyne, began missing school regularly at the start of the year after complaining of not feeling well.

His teachers allegedly advised him to ‘pull his socks up’ because they grew fed up of him being off school.

The 11-year-old also suffered from neck stiffness and tiredness. However, his parents believed playing Xbox was the most likely cause.

They claim doctors diagnosed Charlie with a virus and suggested he needed to see a psychologist because he had anxiety or was lying about his symptoms.

Eventually, on April 22, an eye specialist noticed pressure on the nerves of his eyes – a tell-tale sign of a brain tumour. Scans confirmed their suspicion.

Charlie was told the mass had been growing for six months, and he had surgery to remove the majority of the malignant tumour the next day.

His father Gary Card said he is now a shell of his former self after gruelling radio and chemotherapy. He has urged parents to never ignore their children. 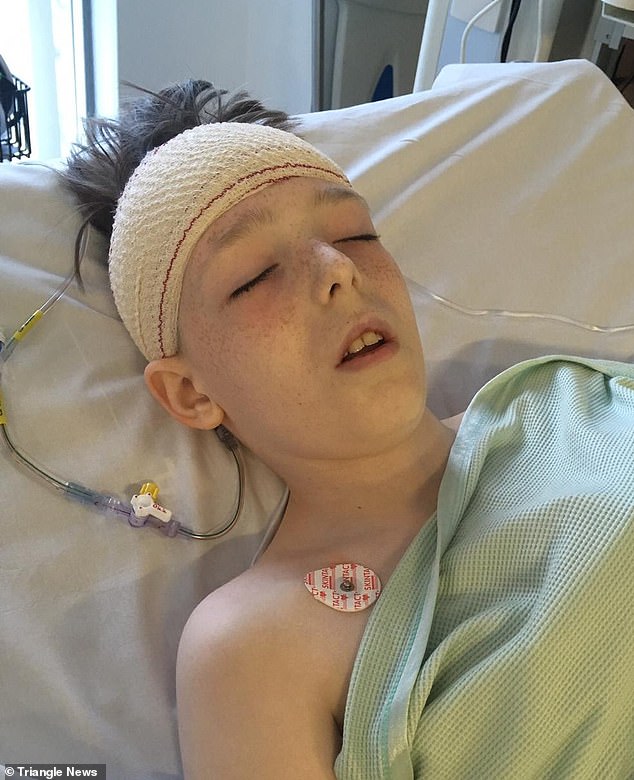 On April 22, Charlie Card was told he had been living with a brain tumour for six months. He had the tumour removed and has since had chemotherapy and radiotherapy 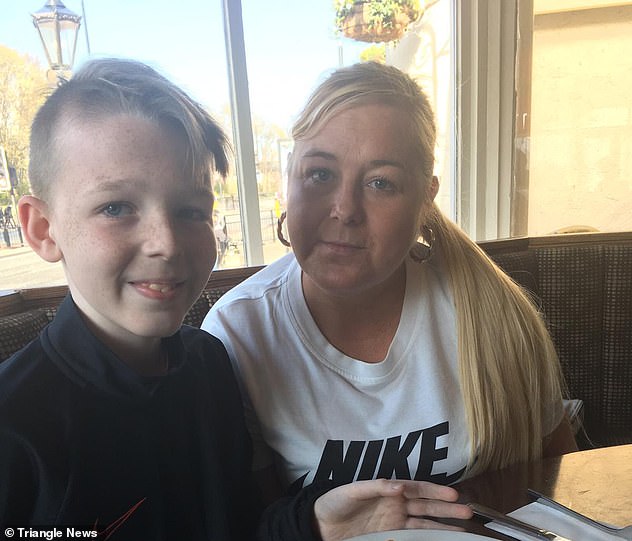 Charlie, 11, whose parents and doctors believed he was faking his symptoms was diagnosed with a cancerous brain tumour. Pictured with his mother, Rosie, 37 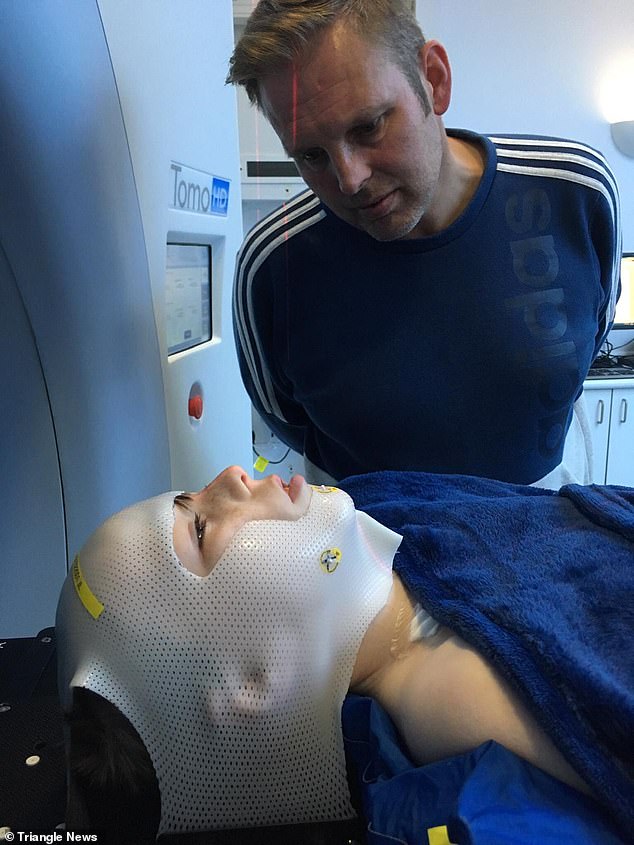 Gary Card, 43, Charlie’s father, said his boy is now a shell of his former self. Charlie is pictured having a brain scan in hospital

The 43-year-old, a former removal porter, said: ‘Listen to the kids if they tell you they are not right.

‘I say to this day that it was Charlie who got himself diagnosed because he wouldn’t take no for an answer.

‘Before he was so open, funny, had a wicked sense of humour but now he is a shell of his former self.

‘He won’t open up, he has lost so much weight, 90 per cent of his hair is gone including his eyebrows and his lips are dry and cracked. He is in constant pain.’

Speaking of the time it took to get a diagnosis, Mr Card said: ‘This is a common theme in hospitals.

‘We were told that a GP will never diagnose a brain tumour and if they do it will be once in their whole career.

‘We don’t blame the doctors because it is just so common for brain tumours to be dismissed.’

When Charlie began regularly missing school at the beginning of this year, Mr Card said the school became suspicious.

But even he and the rest of the family thought Charlie’s behaviour was strange. 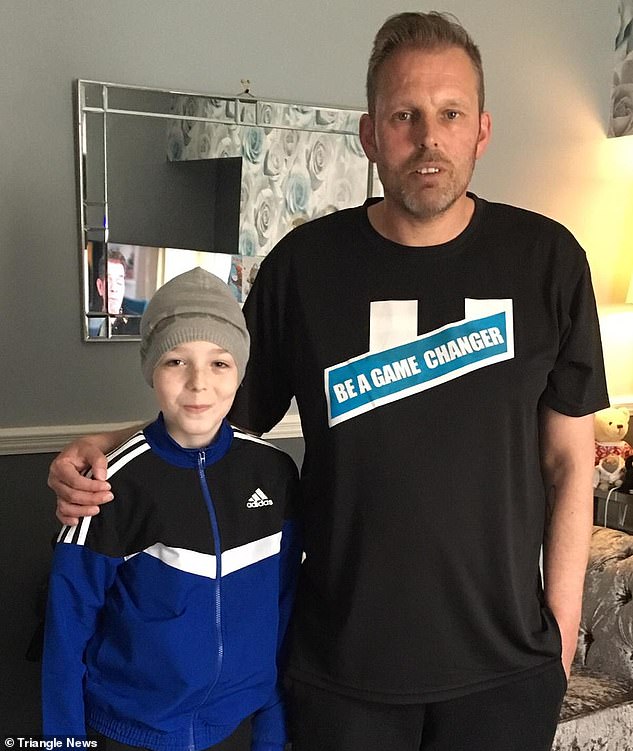 When Charlie began regularly missing school at the beginning of this year, Mr Card, a former removal porter, said the school became suspicious 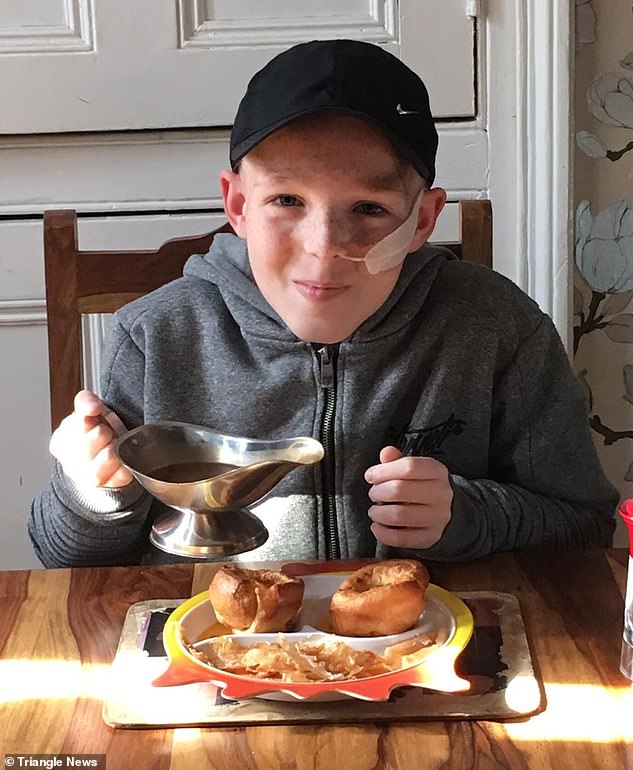 Charlie began missing school regularly at the beginning of the year after complaining of not feeling well. He is pictured during treatment at home in Heaton, Newcastle 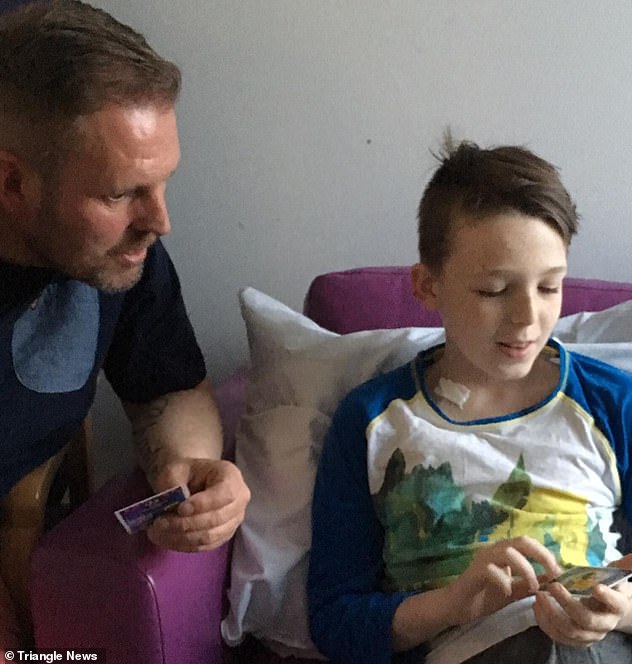 Mr Card said: ‘The school were basically saying they thought he was putting it on. And it did seem like that to be honest.’

Charlie would have time off school once or twice a week from January onwards and his attendance got progressively worse.

School reports cited ‘unexplained absence’ and his parents were brought in for meetings.

They were baffled as Charlie would spend hours retching into an empty bowl but nothing would come up.

When he was taken to the doctors, Mr Card said more than one GP put Charlie’s symptoms down to a viral infection.

On Easter Monday, Charlie complained of having visual disturbances and he was taken to A&E at Royal Victoria Infirmary Hospital (RVI) in Newcastle.

Staff again suggested Charlie may have anxiety before one doctor suggested he was telling lies, the parents said.

Writing on GoFundMe, Ms Tams said after a long seven-hour wait and seeing three different doctors, Charlie was admitted to a children’s assessment unit at RVI.

‘Then after another hour of Charlie chatting with another paedeatric registrar, she came to the conclusion that Charlie needed to see a child psychologist as he was making his symptoms up,’ she wrote.

When Charlie’s parents refused to leave the hospital, Charlie was sent to an eye specialist that evening. 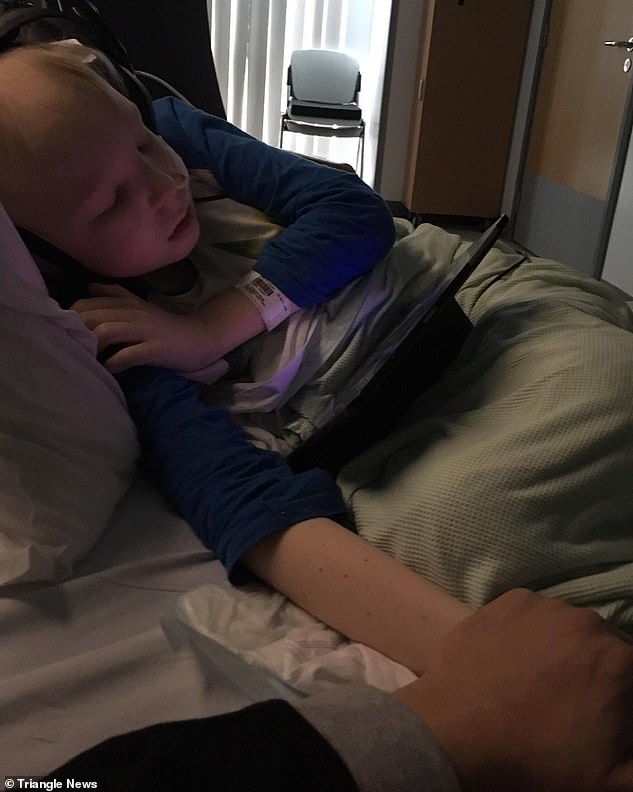 Mr Card, pictured holding Charlie’s hand while in hospital, said his son has lost is hair due to treatment and he is in constant pain 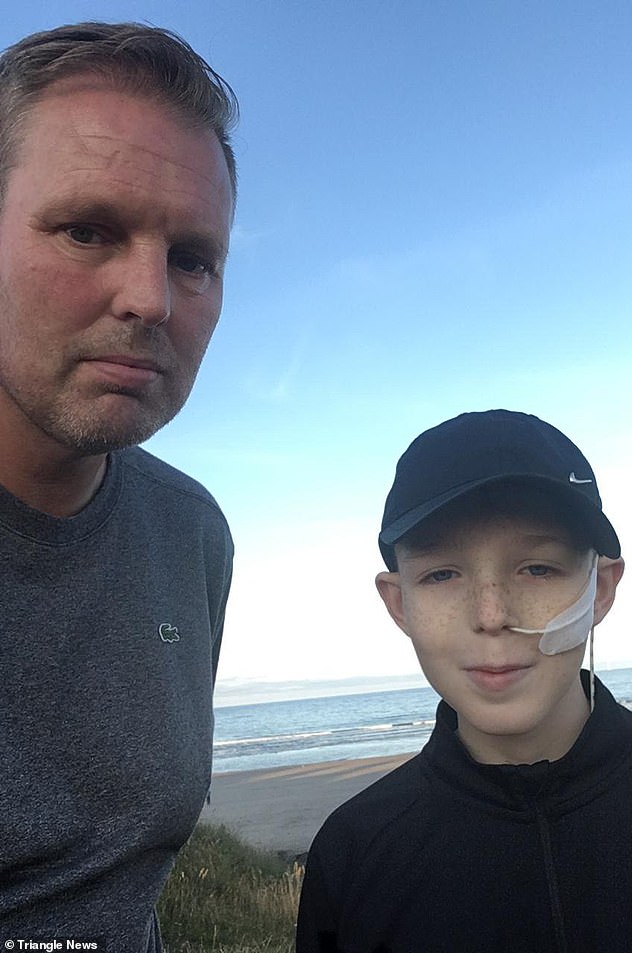 Mr Card, pictured with Charlie, said: ‘Listen to the kids if they tell you they are not right’

Medulloblastoma is a fast-growing, high-grade tumor.

Approximately 70 percent of all cases occur in children under age 10.

Signs and symptoms include:

Treatment consists of surgical removal of the tumor followed by radiation, and then chemotherapy.

According to the American Brain Tumor Association, the five-year survival rate, or what per cent of children live at least five years after the cancer is found are:

The specialist noticed pressure on the nerves of his eyes and a CAT scan revealed the worst.

A surgeon arrived to tell the family about the tumour – known as malignant medulloblastoma.

Though the cancerous tumour is rare, it is the most common malignant brain tumour in children, starting at the lower back part of the brain, called the cerebellum.

Less than 90 children in the UK develop a medulloblastoma each year. Between 250 and 500 children are diagnosed each year in the US.

In cases where a tumour has not spread, survival rates can be as high as 70 per cent.

Mr Card said: ‘He told Charlie he was a surgeon and needed to go into the back of his head and take the tumour out to make him better.

‘He was absolutely petrified and it was probably the only time he ever cried and he was saying “I want to go home – I promise I will come back”.’

Charlie, whose mother is Rosie Tams, had a five-and-a-half hour brain surgery the next day where 99 per cent of the tumour was removed successfully.

He has since endured rounds of radiotherapy and chemotherapy with his final session due on Friday.

But Charlie, who has dreams of being a professional footballer, is now a different boy after the gruelling treatment.

Charlie’s parents, who are engaged, lost a six-month-old baby, Hayden, from an infection in 2009. It’s made recovery all the more difficult for Charlie.

‘He is terrified because this is the same hospital his brother Hayden passed away in and Charlie knows all about him,’ Mr Card said.

‘Even though he was only 14 months old when he died he has always said he lives his life twice for him.’ 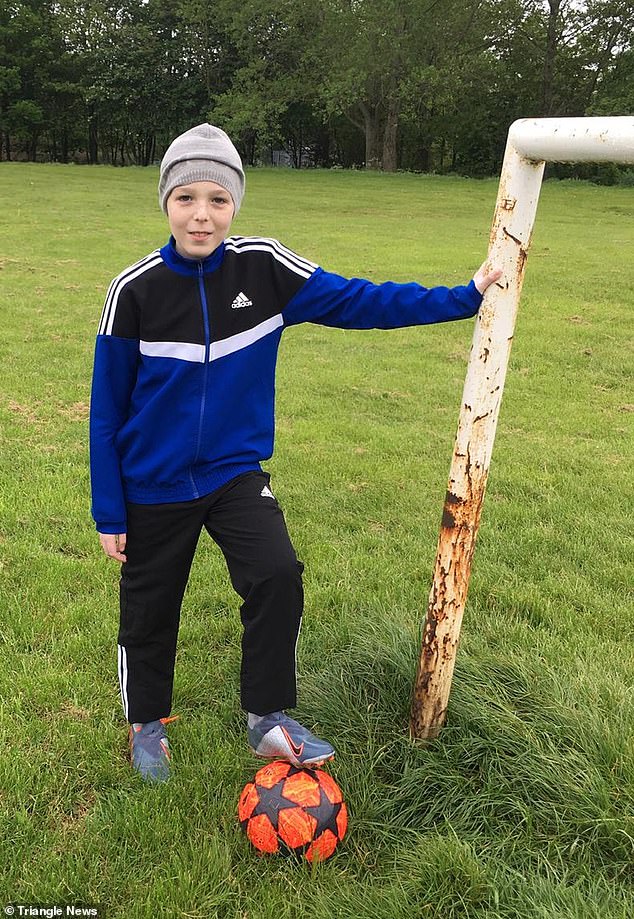 A fundraising page has been set up to help Charlie receive a signed pair of boots from his favourite footballer – Cristiano Ronaldo. He played football before his diagnosis 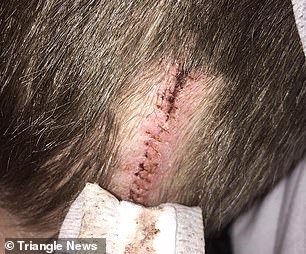 Charlie had a five and a half hour brain surgery just hours after he was diagnosed where 99 per cent of the tumour was removed successfully. Pictured, the scar

He is now planning to give his son the best Christmas ever after his year of hell and has set up a fundraising page.

Charlie’s dream is to receive a signed pair of boots from his favourite footballer – Cristiano Ronaldo.

Mr Card has no idea if he will be able to achieve his son’s number one request but he has now raised over £1,000 to ensure Charlie gets some special gifts.

‘Ideally he wants the Ronaldo signed boots but if he was offered them or the chance to take away his treatment and never have another hospital appointment in his life he would take the latter,’ Mr Card said.

Charlie is desperate to become a normal schoolboy again and soon hopes to ditch hospital visits and focus once more on his football.

Sarah Lindsell, chief executive for The Brain Tumour Charity, said: ‘We can only improve the quality of life for everyone affected by a brain tumour diagnosis by increasing awareness of the symptoms. This is the key to our HeadSmart campaign.

‘HeadSmart has two aims: to save lives and reduce long-term disability by bringing down childhood brain tumour diagnosis times.

‘The campaign helps us to achieve that goal by alerting more healthcare professionals, parents and young people to the signs and symptoms of the disease.

‘As the UK’s foremost brain tumour charity, we are leading the way in fighting brain tumours on all fronts through our work. Together, we will find a cure.’