Only 70.5 per cent of women invited for the NHS tests in England accepted the offer last year, with almost 800,000 turning it down.

This means fewer women are having the life-saving scans than at any point since the current screening programme for 50 to 70 year olds began in 2007.

The figure is also only just above the NHS’s minimum standard of 70 per cent, with recent trends suggesting it could fall below standard for the first time next year.

The NHS data comes in the wake of a breast cancer screening scandal earlier in the year, which saw thousands of women miss out on their invitations for the routine tests. 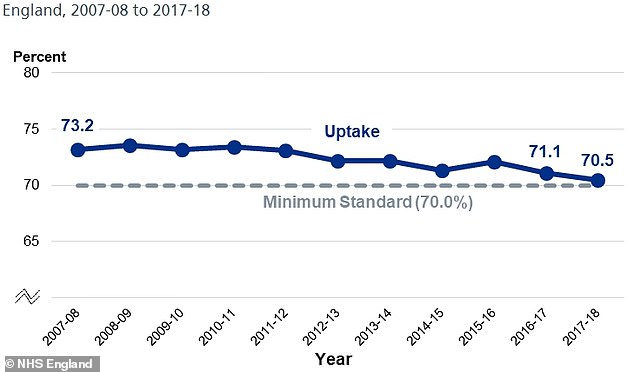 All women in England aged between 50 and 70 are invited for routine breast X-rays every three years.

The scans are used to pick up signs of breast cancer in the early stages, before tumours are large enough to be seen or felt.

They can save lives by spotting potentially deadly cancers early on and enabling women to start treatment sooner, before the disease spreads.

WHAT WAS THE BREAST SCREENING INVITE SCANDAL?

Former Health Secretary Jeremy Hunt announced in May around half a million women might have missed their routine breast screening because of a ‘computer algorithm failure’.

The announcement caused ‘unnecessary significant distress’ experts said, when it was announced last week the true number of women affected was 67,000 – and they were all followed up within months.

Some women weren’t sent invites because NHS computers were calculating their ages wrong and either sending their first invite too late or their last one too soon.

Early warning signs of the blunder first cropped up in 2016, a report revealed last week, up to two years before Mr Hunt was told and revealed it in Parliament.

Experts found 85 per cent of women caught up in the initial uproar were worried without reason because officials did not fully understand what was happening before they went public.

A total of 1,790,700 had a breast screening in the past year within six months of receiving their invite – 70.5 per cent of the total 2.54million invitations sent out.

The number has been steadily falling since the current programme began in 2007, when uptake was 73.2 per cent.

In 2016-17, 71.1 per cent of women were screened within six months of receiving an invitation.

There are fears public confidence in the screening programme has been dented by an admin blunder which came to light earlier this year.

Hundreds of thousands of women were needlessly worried when former Health Secretary Jeremy Hunt announced nearly half a million might have missed tests.

A problem with the way women’s ages were being calculated by NHS computers meant those in some age brackets were not being sent invitations.

Despite uproar in May when Mr Hunt said 450,000 women could have been affected, the true figure was last week revealed to be around 67,000.

Those who might have missed screenings as a result of the letters were all contacted in a follow-up by the NHS.

The NHS admitted this month as many as 50,000 women missed invites to the tests because of an admin problem in the private company running the system.

‘We should be doing our utmost to encourage more to have smear tests,’ said Professor Helen Stokes-Lampard, chair of the Royal College of GPs.

‘But errors such as this will only serve to further damage women’s confidence in the programme.’