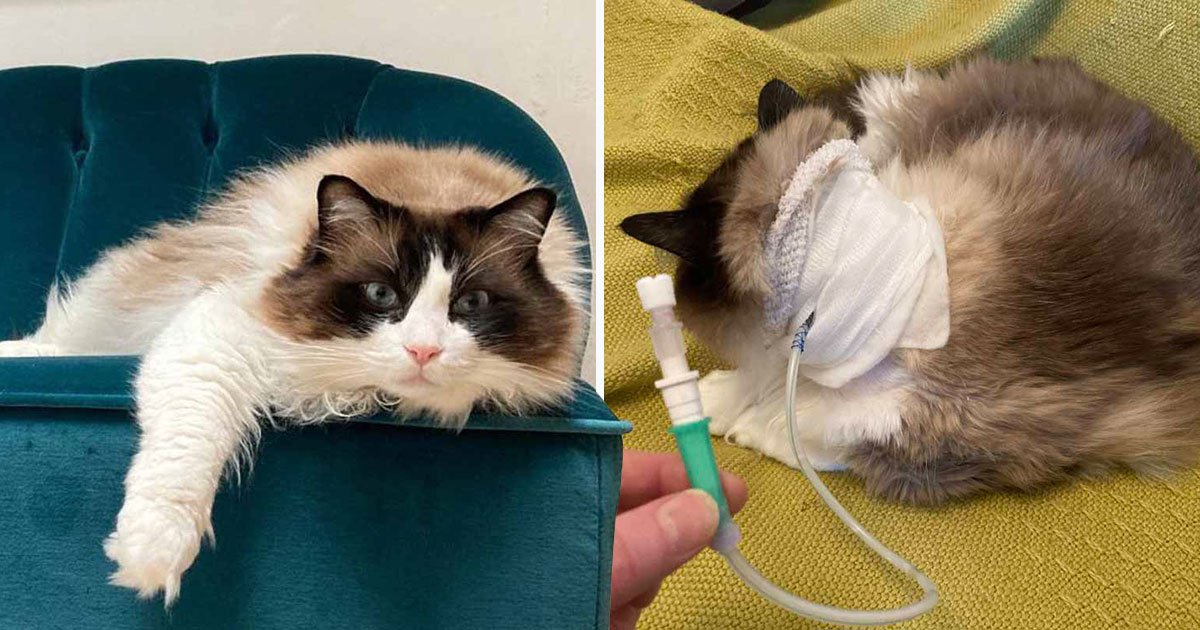 Poor house cat Bruce became so ill when he caught Covid-19 that he had to be fed through a tube for over a month.

Now, his owners believe that he may be the first cat in the world to have suffered Long Covid.

Catherine Watson, 47, an account manager and her music producer partner Gordon MacKinnon, 50, who live in Glasgow, had mild Covid in late November 2021, and feel sure that they passed it on to their pet while they were isolating.

The couple weren’t aware of any risk to cats, so had cuddled Bruce and his brother Bernie while they were in isolation.

Then, Bruce lost his sense of taste and smell, before becoming so ill that he needed to be fed through a tube in his neck for months.

‘It was such a scary time,’ said Catherine. ‘Bruce was so listless, ill and just wouldn’t eat a thing.

‘We now know that’s because he couldn’t smell or taste – a very dangerous thing for cats.

‘Bruce was ill for so long. Professor Hosie, an expert in the field, says this is the first time she’s even seen this symptom – loss of smell and taste – in cats.

‘I want people to know to be careful and keep your distance from your cats if you get Covid. Bruce could have died.’

Both fully vaccinated, Catherine and Gordon felt lucky to only have mild symptoms of the virus, spending their 10-day isolation period recuperating with the cats on the sofa and doing jigsaw puzzles.

But, as the couple recovered, they realised both Bernie and Bruce had become unwell.

Catherine said: ‘They both had weeping eyes and were sneezing.

‘Gordon and I joked to each other, “The cats have got Covid”, but we didn’t know it could actually happen. I assumed it was maybe allergies or dust.’

Bernie recovered quickly. Bruce, however, was still not himself when the couple came out of isolation on around December 6.

‘But I noticed Bruce was nibbling a tiny bit then walking away. Then he went off his food entirely. Soon it was three or four days since he’d eaten anything at all.’

A vet initially prescribed Bruce antacids, in case his issues were digestive, but on December 10 a second trip to the vet led to the cat being admitted.

‘The cats never leave the house,’ noted Catherine. ‘We hadn’t had anyone round as we’d been isolating.

‘Covid was the only thing that made sense and I asked straight out, “Could this be Covid?” But the vets had never heard of that in a cat before and said no.

‘They had no idea what was wrong with him, just that he urgently needed some nutrition.’

Bruce, whose weight had dropped from 6kg to 5.2kg, was kept in hospital, given round the clock care and had a tube inserted into his nose for food and medicine.

He was discharged just before Christmas, with Catherine and Gordon having to jointly feed him with a syringe into a tube in his neck five times a day.

Even with pet insurance, the couple were left to pay more than half of the £5,000 bill due to a cap on cover.

During this worrying time, Gordon read an article that confirmed cats could get Covid, and then contacted Margaret Hosie, Professor of Comparative Virology at the University of Glasgow’s Centre for Virus Research and Associate at the university’s School of Veterinary Medicine.

Catherine explained: ‘She was amazing. She asked our vet to take a blood sample from Bruce then came and picked it up herself.

‘Professor Hosie then took Bruce’s blood back to the University of Glasgow Centre for Virus Research.’

Over a month after his owners believe he first contracted the virus, Bruce tested positive for the antibodies against the Delta variant of Covid-19.

His refusal to eat finally made sense to the couple, who worked out Bruce had still lost his sense of smell and taste.

Catherine said: ‘I also realised that must be why he hadn’t been playing with Bernie. They’d been practically strangers since Bruce was discharged from hospital. They wouldn’t play, stopped sleeping together.

‘It was all because Bruce couldn’t smell his brother to recognise him.’

Catherine and Gordon tried to tempt Bruce to eat by hand feeding him treats like smelly fish warmed up to increase the scent.

Bruce was entirely uninterested for weeks. In January he finally sniffed at a Dreamies cat treat in Catherine’s hand.

She said: ‘He slowly ate three treats through the day. That was a great day.

‘Slowly, slowly his appetite built up and his nose started twitching at smells again. He’d then go to his own bowl for some fish.

‘The tube came out in the end of January.’

Bruce has now made a full recovery and has made history as the first reported case of a cat losing their smell and taste due to the virus. His story will be explored in an academic paper written by Professor Hosie.

Professor Hosie said: ‘As he was losing weight and condition, his owners contacted me to ask when they might expect Bruce to regain his sense of smell and I was unable to provide any answers as nobody had previously reported this clinical sign in cats with Covid.

‘I wouldn’t say that Bruce had long Covid, but I haven’t seen any reports of cats losing their sense of taste and smell.

‘Fortunately Bruce received excellent intensive care from his local vet and subsequently made a good recovery.’