How Christmas and New Year are bad for your cholesterol: Levels are 20% higher after the festive period because of ‘too much brandy butter, cream and Stilton’

Celebrating Christmas is associated with higher cholesterol, scientists have warned.

A study of more than 25,700 people found their cholesterol levels are up to 20 per cent higher in January.

Researchers say this could be because they indulged in fatty foods like brandy butter, cream and Stilton over the festive season. 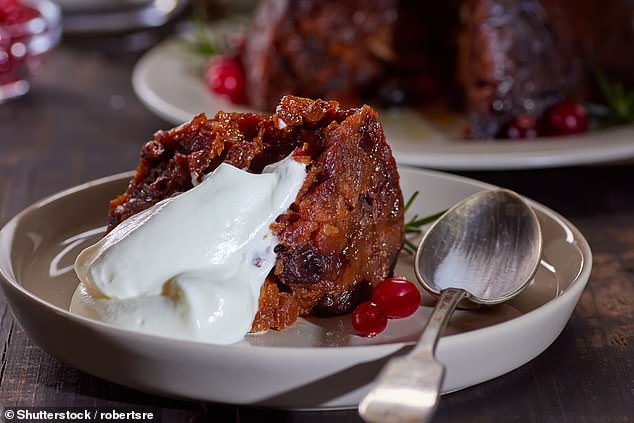 Scientists have warned that indulging in too much cream over Christmas raises a person’s cholesterol level come January, which is associated with heart disease (stock)

Scientists have now warned doctors they should not diagnose people with high cholesterol in January.

And any patients who are told they have the condition at the beginning of the year should be retested before taking medication.

The research was carried out by the University of Copenhagen and led by Dr Signe Vedel-Krogh, from the department of clinical biochemistry.

The study, ‘The Christmas holidays are immediately followed by a period of hypercholesterolemia’, was published in the journal Atherosclerosis.

‘The fact that so many people have high cholesterol readings straight after the Christmas holiday is very surprising.’

WHAT IS HIGH CHOLESTEROL?

Cholesterol is a fatty substance that is vital for the normal functioning of the body.

But too much can cause it to build up in the arteries, restricting blood flow to the heart, brain and rest of the body.

This raises the risk of angina, heart attacks, stroke and blood clots.

Cholesterol is made in the liver and is carried in the blood by proteins.

The first – high-density lipoprotein (HDL) – carries cholesterol from cells to the liver where it is broken down or passed as waste. This is ‘good cholesterol’.

High cholesterol can be genetic but it is also linked to a diet rich in saturated fat, as well as smoking, diabetes, high blood pressure and a family history of stroke or heart disease.

Blood cholesterol is measured in units called millimoles per litre of blood, often shortened to mmol/L.

Cholesterol can be lowered by eating a healthy, low-fat diet; not smoking; and exercising regularly.

If these do not help, cholesterol-lowering medication like statins may be prescribed.

High cholesterol occurs when fatty deposits build up in the blood vessels, which make it difficult for blood to flow through the arteries.

This is often the result of a poor diet that includes too much red meat and full-fat dairy.

If the heart does not get enough oxygen-rich blood, you may have a heart attack, while lack of blood to the brain can cause a stroke. Such conditions are responsible for one in four deaths in both the UK and US.

The researchers looked at the cholesterol levels of 25,764 people, aged 20 to 100, from the Copenhagen General Population Study, over the course of a year.

Results suggest a person’s overall cholesterol level in December or January is 15 per cent greater than in May to June. And their amounts of so-called ‘bad cholesterol’, known as LDL, is 20 per cent higher during the festive season.

Cholesterol is measured in units called millimoles per litre of blood, or mmol/L.

The researchers defined high cholesterol as having an overall level of more than 5mmol/L and an LDL reading of above 3mmol/L. The NHS also recommends healthy people keep their levels below 5mmol/L and 3mmol/L, respectively.

Of those whose cholesterol levels were measured in January, 77 per cent had LDL levels above 3mmol/L and 89 per cent had levels of more than 5mmol/L.

And an astonishing nine out of ten of the study’s participants had high cholesterol in the New Year – six times more than in the other 11 months.

‘Celebrating Christmas is associated with higher levels of total and LDL cholesterol and a higher risk of hypercholesterolemia in individuals in the general population,’ the authors wrote.

They stress people should not panic if they are told they have high cholesterol in the New Year.

‘There is a greater risk of finding that you have elevated cholesterol if you go to the doctor and have your cholesterol tested straight after Christmas,’ Dr Vedel-Krogh said.

‘It is important to be aware of this, both for doctors who treat high cholesterol and those wishing to keep their cholesterol levels down.’