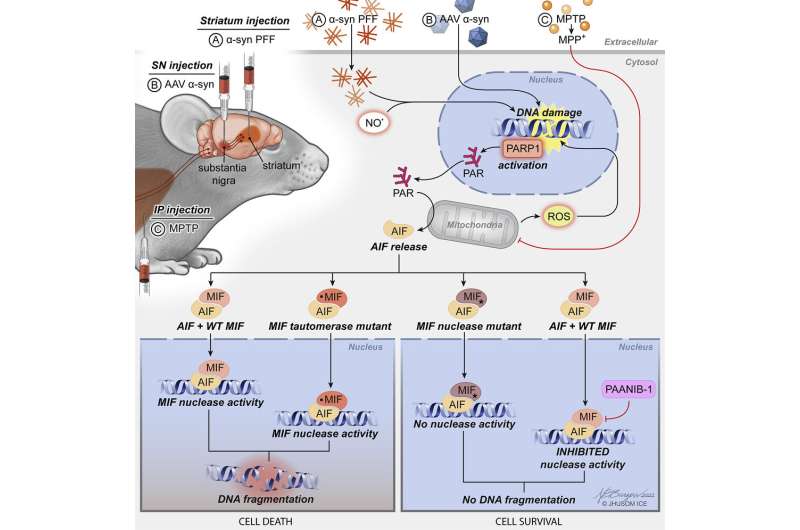 In studies in mice, Johns Hopkins Medicine researchers say they have identified a chemical compound that stops the final events in the pathway linked to the death of brain cells in Parkinson’s disease. Results of the experiments, they say, could advance the development of a drug that can safely short-circuit the same pathway in people, and prevent the damaging effects characteristic of Parkinson’s, stroke and other neurodegenerative disorders.

The findings are published online May 10, in the journal Cell.

“Studies like this show that there is hope in intervening with neurodegenerative disease, and that its worst effects may not be inevitable,” says Valina Dawson, Ph.D., professor of neurology at the Johns Hopkins University School of Medicine and member of the Johns Hopkins Institute for Cell Engineering.

Parkinson’s disease is marked by the buildup of a misfolded protein, called alpha synuclein, in brain cells responsible for producing a neurotransmitter called dopamine. As more misshapen proteins clump together, they kill brain cells through a so-called “programmed” cell death process identified by Dawson and other Johns Hopkins researchers. The process, dubbed parthanatos (from the Greek word for “death”), leads to impairments in movement, emotional regulation and thinking.

Drugs are available that can slow or mute some symptoms of Parkinson’s disease, but none are known to halt the progression of brain cell death once it starts.

Previous studies led by Dawson showed that the protein known as parthanatos associated apoptosis-inducing factor nuclease (PAAN) deals the final blow to brain cells affected by alpha synuclein clumps, destroying the cells’ DNA. In addition to Parkinson’s disease, the PAAN protein has also been linked to cell death in stroke. However, PAAN has multiple functions in the brain, including activities in the immune system that need to be maintained to keep the brain healthy.

“We needed to find chemical compounds that block PAAN’s ability to destroy cellular DNA while leaving its other critical activities untouched,” says Dawson.

Working with knowledge of the molecular structure of PAAN, the researchers screened thousands of known chemicals in the Johns Hopkins Drug Library for those that specifically blocked PAAN from breaking down DNA molecules. They did this by exposing an array of DNA chains to PAAN in the presence of the various chemicals. If the DNA remained intact when the chemical was added, the investigators concluded it could potentially halt PAAN DNA destruction.

The researchers found one chemical that blocked PAAN in these tests without affecting other important PAAN activities, and named it PAANIB-1, or PAAN inhibitor 1.

Specifically, the researchers measured how long each mouse could hold onto a lever with its forepaws. Typically, the mice with Parkinson’s disease symptoms have reduced strength compared with unaffected mice. However, the mice treated with PAANIB-1 showed grip strength that was comparable to mice not affected by Parkinson’s disease symptoms, suggesting that PAANIB-1 blocked the cell degeneration linked to a decline in motor control.

When the researchers later studied the brains of the mice treated with PAANIB-1, they found significantly less brain cell death.

The researchers say that PAANIB-1’s ability to specifically block brain cell death without impacting the protein’s other functions is a promising lead in the search for new drugs to treat Parkinson’s disease.