Chemotherapy may cause breast cancer to SPREAD: Two commonly used drugs encourage the disease to develop in the lungs

Chemotherapy may cause breast cancer to spread, alarming research suggests.

The commonly prescribed chemo drugs paclitaxel and doxorubicin cause breast tumours to release proteins that then circulate in the blood until they reach the lungs, triggering the disease’s onset in a new part of the body.

When scientists blocked this protein in a lab model, the cancer did not spread. They hope their findings will help make chemotherapy more effective. 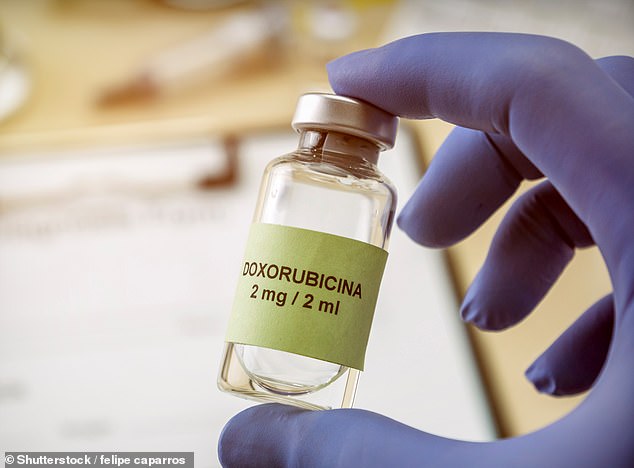 Doxorubicin (stock image) is one of two commonly prescribed breast-cancer chemo drugs the scientists analysed. When put in an experimental tumour model, doxorubicin caused breast tumours to release sacs containing a protein that was then circulated to the lungs

The study was carried out by the Swiss Institute for Experimental Cancer Research and led by Professor Michele De Palma, head of the lab.

Chemotherapy is often given to breast-cancer patients before surgery to shrink their tumours and make them easier to remove.

Known as ‘neoadjuvant therapy’, this also helps to save healthy breast tissue.

In some cases, chemotherapy can even eradicate the tumour entirely, with such patients being highly likely to remain cancer-free for life.

But the treatment does not always shrink tumours. If the growth resists neoadjuvant therapy, it is more likely to spread to other parts of the body.

Breast cancer affects one in eight women at some point in their lives in both the UK and US, statistics show.

It is unclear how many cases of the disease spread, with the lungs, bones, liver and brain being the most commonly affected secondary areas.

Chemo makes exosomes containing the protein annexin-A6, which is not found in sacs released from untreated tumours. 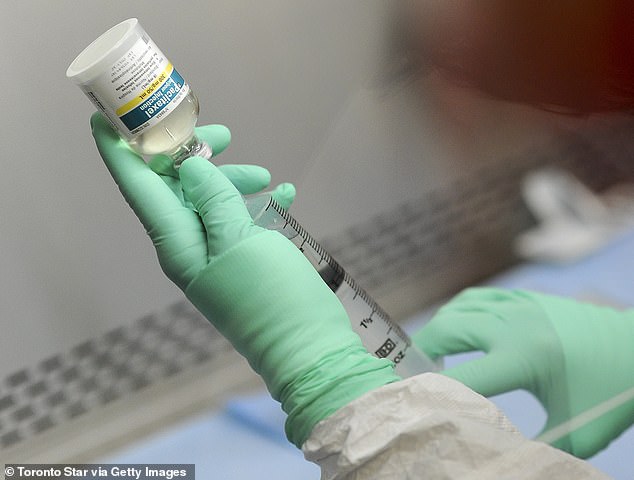 Paclitaxel – the other chemo drug – causes the same sac to be released from breast tumours, which can then trigger secondary cancer when they reach the lungs. A pharmacy technician is pictured preparing a dose of paclitaxel for a breast-cancer patient on May 8

‘It seems that loading of annexin-A6 into exosomes is significantly enhanced in response to chemotherapy,’ study author and postdoctoral researcher Professor Ioanna Keklikoglou said.

Once released from tumours, exosomes circulate in the blood until they reach the lungs.

They then give out annexin-A6, which stimulates lung cells to release another protein called CCL2.

However, monocytes can also be dangerous, with previous studies showing they fuel the survival and growth of cancerous cells in the lungs.

‘In short, our study has identified a new link between chemotherapy and breast cancer metastasis,’ Professor De Palma said.

When the researchers neutralised annexin-A6 or blocked the monocytes, the experimental breast tumour no longer spread to the lungs.

They hope this will improve the effectiveness of neoadjuvant therapy.

‘Various monocyte inhibitors have been developed for clinical use, so they may be tested in combination with neoadjuvant chemotherapy to potentially limit unwanted side effects mediated by exosomes,’ Professor De Palma said.

Although the results are concerning, he urges people not to jump too conclusions.

‘While this observation supports the significance of our findings, at the moment we don’t know if annexin-A6 has any pro-metastatic activity in human breast cancer,’ Professor De Palma added.

The authors also stress their findings should not discourage people from receiving neoadjuvant chemo when it is needed.

‘It remains an essential and potentially curative treatment for many invasive breast cancers, as shown by multiple clinical trials,’ they wrote.

WHAT IS BREAST CANCER, HOW MANY PEOPLE DOES IT STRIKE AND WHAT ARE THE SYMPTOMS?

What is breast cancer?

Breast cancer develops from a cancerous cell which develops in the lining of a duct or lobule in one of the breasts.

When the breast cancer has spread into surrounding breast tissue it is called an ‘invasive’ breast cancer. Some people are diagnosed with ‘carcinoma in situ’, where no cancer cells have grown beyond the duct or lobule.

Most cases develop in women over the age of 50 but younger women are sometimes affected. Breast cancer can develop in men though this is rare.

The cancerous cells are graded from stage one, which means a slow growth, up to stage four, which is the most aggressive.

A cancerous tumour starts from one abnormal cell. The exact reason why a cell becomes cancerous is unclear. It is thought that something damages or alters certain genes in the cell. This makes the cell abnormal and multiply ‘out of control’.

Although breast cancer can develop for no apparent reason, there are some risk factors that can increase the chance of developing breast cancer, such as genetics.

What are the symptoms of breast cancer?

The usual first symptom is a painless lump in the breast, although most breast lumps are not cancerous and are fluid filled cysts, which are benign.

The first place that breast cancer usually spreads to is the lymph nodes in the armpit. If this occurs you will develop a swelling or lump in an armpit.

How is breast cancer diagnosed?

If you are confirmed to have breast cancer, further tests may be needed to assess if it has spread. For example, blood tests, an ultrasound scan of the liver or a chest x-ray.

How is breast cancer treated?

Treatment options which may be considered include surgery, chemotherapy, radiotherapy and hormone treatment. Often a combination of two or more of these treatments are used.

How successful is treatment?

The outlook is best in those who are diagnosed when the cancer is still small, and has not spread. Surgical removal of a tumour in an early stage may then give a good chance of cure.

The routine mammography offered to women between the ages of 50 and 70 mean more breast cancers are being diagnosed and treated at an early stage.