The current sustained increase in COVID-19 has brought the total number of cases in children to over 13 million since the start of the pandemic, according to the American Academy of Pediatrics and the Children’s Hospital Association.

The latest weekly count – 62,467 reported for the week ending May 5 – was 17.4% higher than the previous week and marks four consecutive increases since early April, when cases dropped to their lowest point since last summer. The cumulative number of cases in children is 13,052,988, which accounts for 19.0% of all cases reported in the United States, the AAP and CHA said in their weekly COVID-19 report. 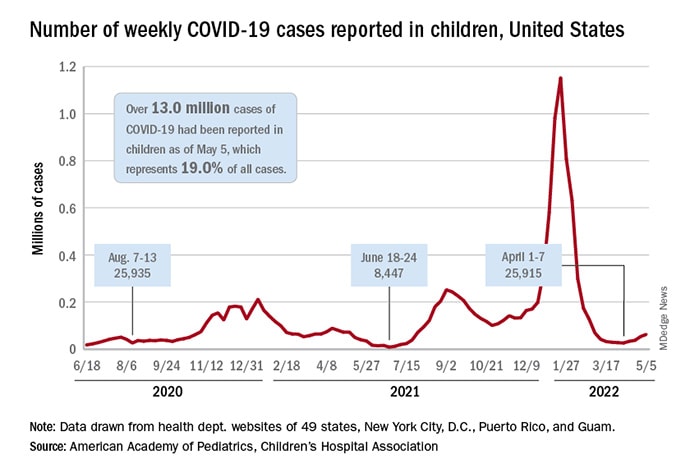 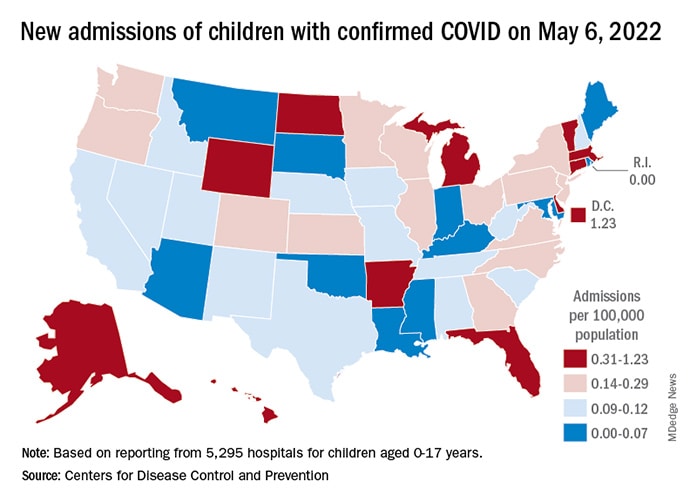 Nationally, emergency department visits also have been rising over the last month or so. Children aged 0-11 years, who were down to a 7-day average of 0.5% of ED visits with diagnosed COVID-19 in early April, saw that number rise to 1.4% on May 5. Children aged 12-15 years went from a rate of 0.3% in late March to the current 1.2%, as did 16- to 17-year-olds, the CDC said on its COVID Data Tracker.

The vaccination effort, meanwhile, continues to lose steam, at least among children who are currently eligible. Initial vaccinations in those aged 5-11 slipped to their lowest-ever 1-week total, 47,000 for April 28 to May 4, while children aged 16-17 continued a long-term slide that has the weekly count down to just 29,000, the AAP said in its weekly vaccination report.

This article originally appeared on MDedge.com, part of the Medscape Professional Network.