Chinese scientists who edited human genes have lost touch with the patients whose DNA they tweaked, report says

Chinese scientists who edited human genes have lost touch with the patients they treated, according to a new Wall Street Journal report.

The claim has sparked widespread concerns in the scientific community about ethics and unintended consequences just weeks after another Chinese scientist claimed he modified the DNA of twin girls to make them resistant to AIDS – and that he is working on another pregnancy.

CRISPR, which was first described in 1987, offers incredible opportunities for scientists to circumvent diseases and genetic glitches.

But Jennifer Doudna, the UC Berkeley professor who streamlined CRISPR into a two-step process, warns the follow-up to an experiment is just as crucial as the experiment itself.

‘Since we do not fully understand the human genome and are still developing knowledge of Crispr-Cas technology, we need to monitor the intended and unintended consequences over the lifespan of patients,’ Doudna told the Journal. 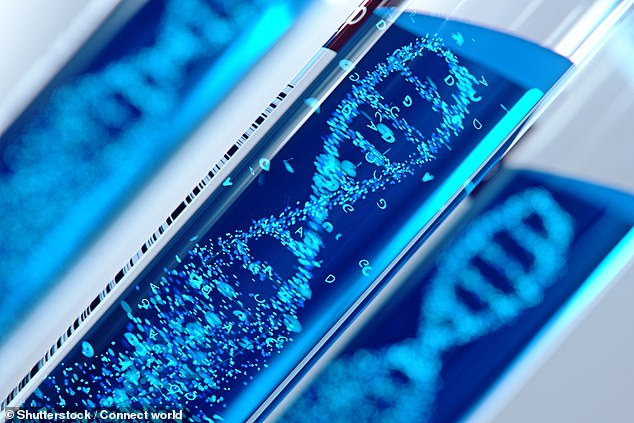 Western scientists are not the only ones crying foul after Dr He Jiankui claimed in November that he modified the DNA of twin girls to make them resistant to infection with the AIDS virus.

China’s Vice Minister of Science and Technology has condemned the ‘unacceptable’ research, and said ministry is strongly opposed to the reported experiments.

The Chinese government has ordered a halt to work by the entire medical team that claimed to have helped Dr He in his research.

Universities and police are also investigating.

And a group of leading scientists declared that the world isn’t ready for gene-edited babies following Dr He’s shock claims.

Many argued it was irresponsible to alter the genes of eggs, sperm or embryos except in lab research because not enough is known yet about its risks or safety.

Researchers at the conference in Hong Kong – where he revealed his experiment – echoed these concerns, saying it was still too soon to make permanent changes to DNA that can be inherited by future generations, as Dr He claims to have done.

This graphic reveals how, theoretically, an embryo could be ‘edited’ using the powerful tool Crispr-Cas9 to defend humans against HIV infection

There is no independent confirmation of what Dr He says he did.

In fact, Doudna says, we cannot be sure it happened or what Dr He did, since his paper was not peer-reviewed.

The private hospital where Dr He performed the work accused him of forging the paperwork needed to approve his experiments.

Harmonicare Women and Children’s Hospital in Shenzhen said it had asked the police to investigate.

Whatever happened, several prominent scientists said the case showed a failure of the field to police itself and the need for stricter principles or regulations.

‘It’s not unreasonable to expect the scientific community’ to follow guidelines, said Professor David Baltimore, a Nobel laureate from California Institute of Technology who led the panel.

There already are some rules that should have prevented what Dr He says he did, said Dr Alta Charo, a University of Wisconsin lawyer and bioethicist and a conference organiser.

WHAT ARE SOME OF THE DOUBTS SURROUNDING DR HE’S CLAIMS?

Several scientists reviewed materials that Dr He provided to the AP and said tests so far are insufficient to say the editing worked or to rule out harm.

They also noted evidence that the editing was incomplete and that at least one twin appears to be a patchwork of cells with various changes.

‘It’s almost like not editing at all’ if only some of certain cells were altered, because HIV infection can still occur, famed Harvard University geneticist Professor George Church said.

Church and Dr Kiran Musunuru, a University of Pennsylvania gene editing expert, questioned the decision to allow one of the embryos to be used in a pregnancy attempt, because the Chinese researchers said they knew in advance that both copies of the intended gene had not been altered.

‘In that child, there really was almost nothing to be gained in terms of protection against HIV and yet you’re exposing that child to all the unknown safety risks,’ Dr Musunuru said.

The use of that embryo suggests that the researchers’ ‘main emphasis was on testing editing rather than avoiding this disease,’ Church said.

Even if editing worked perfectly, people without normal CCR5 genes face higher risks of getting certain other viruses, such as West Nile, and of dying from the flu.

Since there are many ways to prevent HIV infection and it’s very treatable if it occurs, those other medical risks are a concern, Dr Musunuru said.

There also are questions about the way Dr He said he proceeded.

He gave official notice of his work long after he said he started it – on November 8, on a Chinese registry of clinical trials.

It’s unclear whether participants fully understood the purpose and potential risks and benefits.

The hospital linked to the controversial project denied approving the procedure and accused Dr He of forgery. 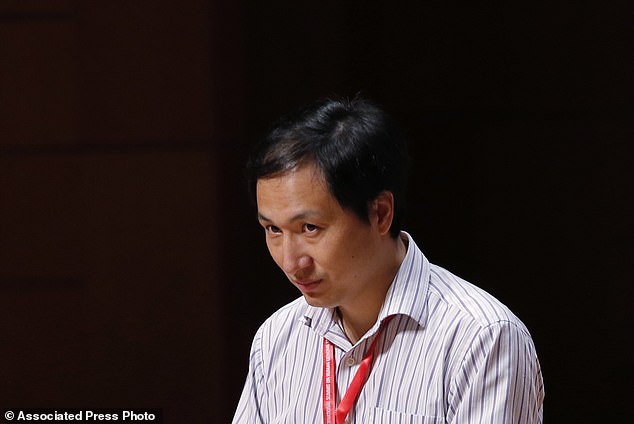 Dr He’s claims sparked outrage this week from the global scientific community, with some experts calling the work ‘monstrous’. Pictured is the scientist speaking in November during the Human Genome Editing Conference in Hong Kong 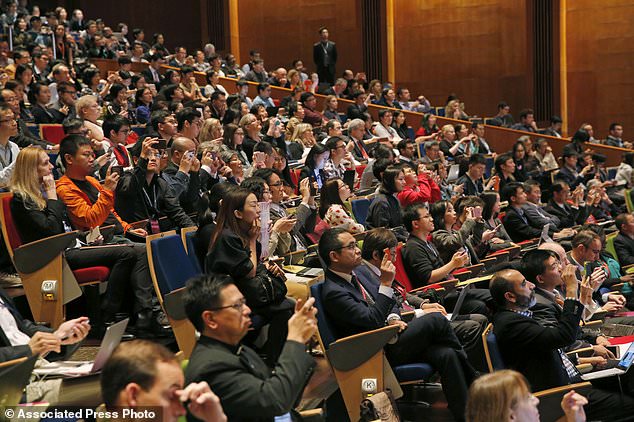 The audience reacts as He Jiankui, a Chinese researcher, speaks during the Human Genome Editing Conference in Hong Kong in November

He Jiankui speaks during an interview at a laboratory in Shenzhen in southern China’s Guangdong province. The Chinese scientist claimed to have helped make the world’s first genetically edited babies

‘I think the failure was his, not the scientific community,’ Dr Charo said.

Gene editing for reproductive purposes might be considered in the future ‘but only when there is compelling medical need,’ with clear understanding of risks and benefits, and certain other conditions, said Dr Victor Dzau, president of the U.S. National Academy of Medicine, one of the conference sponsors.

‘Not following these guidelines would be an irresponsible act,’ he added.

Despite a wave of backlash following his first announcement, Dr He then revealed that a second gene-edited pregnancy was underway.

The second potential gene-edited pregnancy is at a very early stage and needs more time to see if it will last, Dr He said.

Gene editing is banned in Britain, the US many other parts of the world, largely because its long-term effects on mental and physical health are poorly understood.

The technique carries the risk that altered DNA will warp other genes – potentially dangerous mutations that may be passed down to future generations.

Speaking Wednesday, Dr He, of Southern University of Science and Technology in Shenzhen, said he was ‘proud’ of his work.

He added that ‘another potential pregnancy’ of a gene-edited embryo was in its early stages.