The state of your downstairs hair situation is something every person has preferences on — and those preferences don’t fly completely out the window just because you’re pregnant. Chrissy Teigen made that apparent on Wednesday when she asked her followers whether it was worth it to get a bikini wax deep in the third trimester of her pregnancy.

“I know it’s definitely more painful pregnant but is waxing down there while pregnant a litttttle bit worse or a lot a lot worse?” Teigen tweeted. “I can do a little bit worse.”

Teigen, enjoying the end of a still-healthy rainbow baby pregnancy (which is always such a great thing to hear!), joked about wanting to do her doctors a solid by taking care of the downstairs hair ahead of delivery — and while any good doctor will never give a single f-ck about what your hair situation is, we figured it was worthwhile looking into how safe it is to wax that deep into a pregnancy.

Now obviously hair removal is never a necessary thing to do for anyone — in fact, as SheKnows has previously reported that pubic hair down there (no matter how much you might be conditioned to hate it) is actually pretty good for you.

“Pubic hair helps to fend off bacteria and unwanted pathogens from entering the vaginal area, which helps to keep us from getting yeast infections and UTIs,” as Dr. Jessica Shepherd previously told SheKnows. “In other words, pubic hair is supposed to be there.”

But folks have their preferences and we respect that in this house. So what’s the deal with getting your wax on deep into a pregnancy? 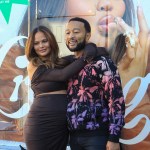 Well, the pain of waxing such a vulnerable, painful area while pregnant? Yeah, uh, it’s definitely worse than it is when not pregnant (which is still pretty ouch).

But that’s not to say that hair removal isn’t safe to do while pregnant. Like in so many things, pregnancy does offers some additional complications to this method of hair removal: Added blood-flow, less visibility (which Teigen noted in the thread of her tweet), flexibility and added discomfort can make DIY jobs more of a challenge for sure and can also level-up the intensity of the pain.

“Waxing while pregnant will be more painful than usual because the increased blood flow to your skin makes it super sensitive,” as What to Expect previously reported. “This is especially true of your pelvic area. A bikini wax or a Brazilian wax will hurt while you’re pregnant.”

Though in general waxing does come with a few risks that may not be worth it during a pregnancy — particularly if you’re immunocompromised or have other conditions that might make you less capable of navigating complications. Skin with open cuts, rashes, varicose veins, scar tissue, moles, pimples, warts or areas where you might put topical acne medications shouldn’t be waxed, as Healthline noted.

Before you go, check out our favorite bed rest essentials for pregnant folks: