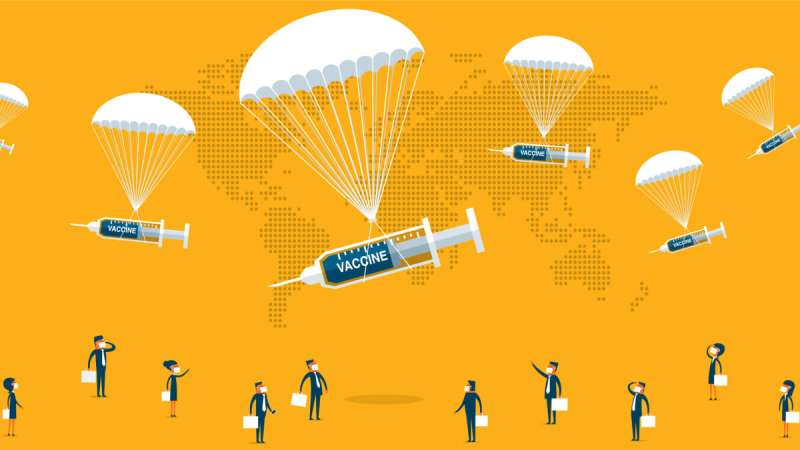 Even if you’re still waiting for a vaccine, watching the first people get their COVID-19 vaccinations may have felt like a huge relief. As the weeks pass, countless reports are coming out about the effectiveness of new vaccines that may be approved. It’s important to keep up, but it’s also a daunting task, given the flood of information (and misinformation) coming at us from so many directions.

So, how do they differ? Here’s what we know so far.

Vaccines from Pfizer-BioNTech and Moderna are being administered in the U.S. right now, Johnson & Johnson applied for emergency use authorization (EUA) from the Food and Drug Administration (FDA) for its COVID-19 vaccine in February, and others are on track to do the same. Even though you will likely not be able to choose which vaccine you will get, it’s still helpful to know how each one is different.

With that in mind, we mapped out a comparison of the most prominent vaccines so far.

The two vaccines authorized by the FDA

On December 11, 2020, this became the first COVID-19 vaccine to receive an FDA EUA, after the company reported positive clinical trial data, which included news that the vaccine was up to 95% more effective than a placebo at preventing symptomatic disease. But the Pfizer-BioNTech vaccine has had strict requirements involving how the vaccine is stored. For instance, it has required shipping in ultra-cold temperature-controlled units (-94 degrees Fahrenheit). In mid-February, the company submitted new data to the FDA demonstrating the stability of the vaccine at temperatures more commonly found in pharmaceutical refrigerators and freezers. Approval would make the vaccine easier to distribute.

Status: Emergency use in the U.S. and other countries

Recommended for: Anyone 16 and older. Pfizer-BioNTech is still testing the vaccine in kids ages 12-15.

Common side effects: Chills, headache, pain, tiredness, and/or redness and swelling at the injection site, all of which generally resolve within a day or two of rest, hydration, and medications like acetaminophen. (If symptoms don’t resolve within 72 hours or if you have respiratory symptoms, such as cough or shortness of breath, call your doctor.) On rare occasions (as in, 11 cases in 18 million vaccinations), mRNA vaccines have appeared to trigger anaphylaxis, a severe reaction that is treatable with epinephrine (the drug in Epipens). For that reason, the Centers for Disease Control and Prevention (CDC) requires vaccination sites to monitor everyone for 15 minutes after their COVID-19 shot, and for 30 minutes if they have a history of severe allergies or are taking a blood thinner.

How it works: This is a messenger RNA (mRNA) vaccine, which uses a relatively new technology. Unlike vaccines that put a weakened or inactivated disease germ into the body, the Pfizer-BioNTech mRNA vaccine delivers a tiny piece of genetic code from the SARS CoV-2 virus to host cells in the body, essentially giving those cells instructions, or blueprints, for making copies of spike proteins (the spikes you see sticking out of the coronavirus in pictures online and on TV). The spikes do the work of penetrating and infecting host cells. These proteins stimulate an immune response, producing antibodies and developing memory cells that will recognize and respond if the body is infected with the actual virus.

How well it works: 95% efficacy in preventing COVID-19 in those without prior infection 7 days or more after the second dose. The researchers report that the vaccine was equally effective across a variety of different types of people and variables, including age, gender, race, ethnicity, and body mass index (BMI)—or presence of other medical conditions. In clinical trials, the vaccine was 100% effective at preventing severe disease.

Moderna’s vaccine was the second one authorized for emergency use in the U.S.—it received FDA EUA on December 18, 2020, about a week after the Pfizer vaccine. Moderna is also an mRNA vaccine, using the same technology as the Pfizer-BioNTech one and with a similarly high efficacy at preventing symptomatic disease. There are two key differences: The Moderna vaccine can be shipped and kept in long-term storage in standard freezer temperatures, and stored for up to 30 days using normal refrigeration, making it easier to distribute and store. Also, the Moderna vaccine was slightly less effective in clinical trials—about 86%—in people who are 65 and older.

Status: Emergency use in the U.S. and other countries

Recommended for: Adults 18 and older. Moderna is still testing the vaccine in children ages 12-17.

Common side effects: Similar to the Pfizer vaccine, side effects can include chills, headache, pain, tiredness, and/or redness and swelling at the injection site, all of which generally resolve within a day or two. On rare occasions, mRNA vaccines have appeared to trigger anaphylaxis, a severe reaction that is treatable with epinephrine (the drug in Epipens). For that reason, the CDC requires vaccination sites to monitor everyone for 15 minutes after their COVID-19 shot, and for 30 minutes if they have a history of severe allergies.

How well it works: 94.1% effective at preventing symptomatic infection in people with no evidence of previous COVID-19 infection. The vaccine appeared to have high efficacy in clinical trials among people of diverse age, sex, race, and ethnicity categories and among persons with underlying medical conditions (although as mentioned above, the efficacy rate drops to 86.4% for people ages 65 and older).

How well it works on virus mutations: Some research has suggested that Moderna’s vaccine may provide protection against the B.1.1.7 and B.1.351 variants. Researchers are still studying this.

The company submitted a request to the FDA in early February for emergency use approval for a different type of vaccine, called a carrier, or virus vector, vaccine. In comparison to the Pfizer and Moderna vaccines, this one is easier to store (in refrigerator temperature), and requires only a single shot, both of which could make it easier to distribute and administer. An analysis released by the FDA in late February showed that the vaccine may reduce the spread of the virus by vaccinated people.

Recommended for: Adults 18 and older. The company also expects to start testing the vaccine on children.

Common side effects: Fatigue, fever headache, injection site pain, or myalgia (pain in a muscle or group of muscles), all of which generally resolve within a day or two. It has had noticeably milder side effects than the Pfizer and Moderna vaccines, according to the FDA report released in late February. No one suffered an allergic reaction in clinical trials for the vaccine, according to the company.

How it works: This is a carrier vaccine, which uses a different approach than the mRNA vaccines to instruct human cells to make the SARS CoV-2 spike protein. Scientists engineer a harmless adenovirus (a common virus that, when not inactivated, can cause colds, bronchitis, and other illnesses) as a shell to carry genetic code on the spike proteins to the cells (similar to a Trojan Horse). The shell and the code can’t make you sick, but once the code is inside the cells, the cells produce a spike protein to train the body’s immune system, which creates antibodies and memory cells to protect against an actual SARS-CoV-2 infection.

How well it works: 72% overall efficacy and 86% efficacy against severe disease in the U.S.

How well it works on virus mutations: This vaccine’s effectiveness has been shown to offer protection against the B.1.1.7 variant. According to the analyses the FDA released in late February, there was 64% overall efficacy and 82% efficacy against severe disease in South Africa, where the B.1.351 variant was first detected.

Two vaccines not yet available in the U.S.

This vaccine, which is currently being distributed in the United Kingdom, is distinguished from some of its competitors by its lower cost—it’s cheaper to make per dose, and it can be stored, transported, and handled in normal refrigeration for at least six months.

Status: Not available in the U.S., but approved for emergency use in other countries

Recommended for: Adults 18 and older

Common side effects: Tenderness, pain, warmth, redness, itching, swelling or bruising at the injection site, all of which generally resolve within a day or two.

How it works: Similar to the Johnson & Johnson’s vaccine, this is a carrier vaccine, made from a modified version of a harmless adenovirus. The final product contains the spike protein found in SARS-CoV-2. When that protein reaches the body’s cells, the immune system mounts a defense, creating antibodies and memory cells to protect against an actual SARS-Cov2 infection.

How well it works: An early review of Phase 3 trials showed 70% efficacy starting after the first dose, and 100% protection against severe disease, hospitalization, and death after the second dose. The analysis also showed the potential for the vaccine to reduce asymptomatic transmission of the virus by as much as 67%.

How well it works on virus mutations: So far it seems to work better against the mutation that emerged in Great Britain than the one that emerged in South Africa. A paper in early February (not yet peer-reviewed) cited 74.6% efficacy against the B.1.1.7 variant. However, the vaccine did not protect as well against mild and moderate cases in people infected with the B.1.351 variant. Therefore, South Africa halted its rollout while scientists continue to study whether the vaccine can prevent severe illness and death in people infected with this variant.

This vaccine has been shown to be effective not only against COVID-19, but also against the mutations that have emerged in Great Britain and, to some extent, South Africa (although in late January, efficacy against the latter was found to be less than 50% against severe illness). While the other breakthrough vaccines have been either mRNA or vector platforms, the Novavax vaccine is yet another type, called a protein adjuvant. It is also simpler to make and can be stored in a refrigerator.

Recommended for: The vaccine is being studied in adults ages 18-84

Common side effects: While the Novavax vaccine is still being studied, early trials have shown no adverse events.

How it works: Unlike the mRNA and vector vaccines, this is a protein adjuvant (an adjuvant is an ingredient used to strengthen the immune response). While other vaccines trick the body’s cells into creating parts of the virus that can trigger the immune system, the Novavax vaccine takes a different approach. It contains the spike protein of the coronavirus itself, but formulated as a nanoparticle, which cannot cause disease. When the vaccine is injected, this stimulates the immune system to produce antibodies and T-cell immune responses.