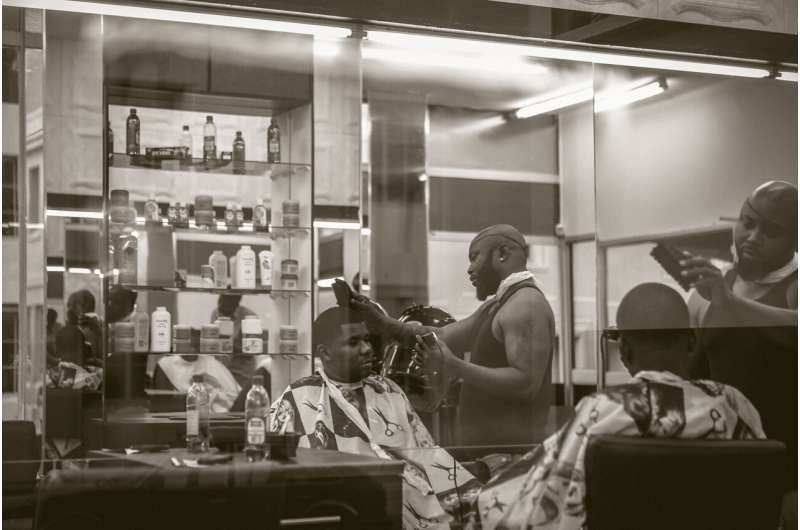 Samuel Glickman was worried when one of his clients stopped coming in for his regular haircuts last year.

Glickman’s Privado barbershop—located on Sunset Avenue in Atlanta’s Vine City neighborhood, 14 doors from Martin Luther King Jr.’s old home—has been a pillar in the quickly regentrifying neighborhood. A mural of civil rights leaders on the side of the building blends the past with the present.

Glickman, who has been cutting hair since he was a teenager, started asking questions about the client, a videographer with ties to the community. He found out that the man had committed suicide.

“He sat in my chair every week, and we talked. But I wish I had had some deeper conversations with him,” Glickman said. “I didn’t know what he was going through.”

What struck Glickman was that another client had committed suicide in 2021.

“I just never knew,” Glickman said, holding his head down. “I never knew.”

For generations, the barbershop has served as a meeting place, social club and respite for Black men and boys, who use them not only to get fresh for the week but to pick up wisdom.

Now, a group wants the gathering spots to do more. “The Confess Project” is enlisting barbershops like Privado to double as mental health centers, where Black men can comfortably talk about their issues.

“When you confess, you become your best,” said Lorenzo Lewis, founder of the organization that is leading the charge nationwide. “We can move past those things that have become barriers in our lives with therapy and support.”

While Black Americans experience similar rates of mental illness as other Americans, Black men are about half as likely as their white peers to seek counseling, according to the American Psychological Association.

About 45% of the white men who are between the ages of 18-44 and experience anxiety or depression daily were likely to use mental health services, compared to only 26% of Black and Hispanic men with the same ailments.

“African American men struggle with depression, anxiety and aggressive anger issues, but many of them have been afraid to talk,” said Laklieshia Izzard, a licensed professional counselor and a member of the board of directors of the National Alliance on Mental Issues of Georgia. “Our men are in dire need of support.”

Lewis emphasized that The Confess Project isn’t training therapists. Rather, organizers are looking for gatekeepers willing to learn how to listen and look for subtle changes in personalities, like withdrawal or changes in grooming, that might signal a mental health problem.

The project has trained more than 1,500 barbers in more than 50 cities.

Lewis founded The Confess Project in 2016 after working as a case worker for troubled teens in Little Rock, Arkansas. Most of the teens were Black and never addressed their mental health issues.

Remembering his days working in his aunt’s beauty salon, he got the idea of using barbershops to reach those who might be struggling.

“We wanted to create a community around Black men that was safe and nonjudgmental, where they could talk about their pain,” Lewis said. “Barbers are going to see people who are not going to know to seek help. They are on the front lines as mental health advocates.”

At a recent block party in Vine City, a large stage was set up outside of Privado, The Confess Project’s Barbershop of the Year.

The whole area was buzzing with vendors giving away food and service organizations providing information.

Atlanta-based rapper Pastor Troy sat quietly on a panel with mental health professionals and law enforcement officers to talk about the state of the Black mind.

“Just as strong as we are, we gotta represent the weaknesses we have,” said Pastor Troy, who drew strong criticism—and praise—for what some described as a homophobic rant in 2020 against fellow musician Lil Nas. Pastor Troy said that he has sought out professional help to address mental health issues.

“It was important to find that place to help myself with this therapy,” Pastor Troy said before taking the stage. “Get it off your chest, out of your mind and release it. That has allowed me to embrace my issues.”

Inside Privado barbershop, Glickman seemed unfazed by the activity outside.

He had a lobby full of heads to cut.

While he was honored to be Confess Project’s Barbershop of the Year, Glickman said he still had much to learn.