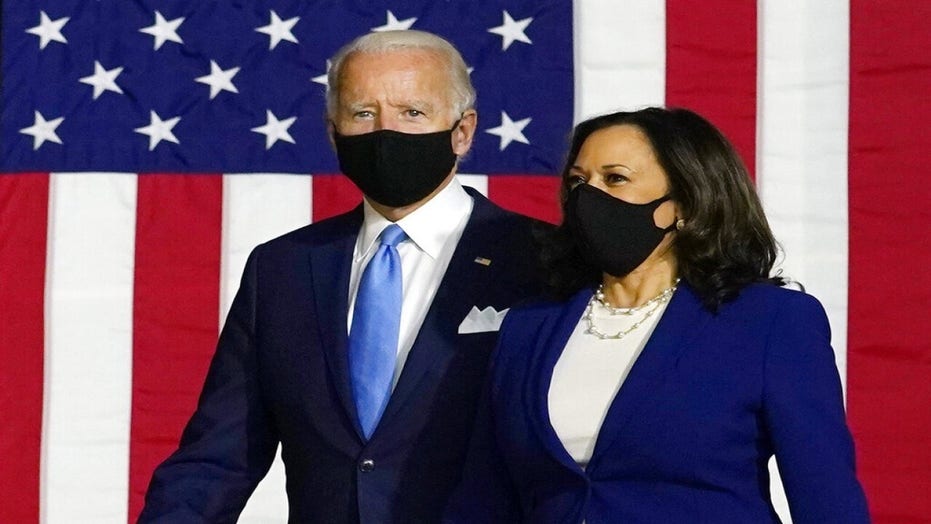 Should lawmakers get vaccine priority over health care workers?

It has been more than a week since the Pfizer and BioNTech coronavirus vaccine's much-anticipated shipments arrived at the NewYork-Presbyterian Morgan Stanley Children's Hospital. While thousands of front-line health care workers are said to have been inoculated, others contend that the process has been punctured by uncertainty and a chaotic waiting game.

"We still don't know when we will get it; there are video updates from the senior vice-president or CEO each day on the coronavirus situation," lamented one front-line medical worker, who spoke to Fox News on the condition of anonymity. "But there are people at the hospital getting it first who aren't directly on the front lines."

According to the worker, other colleagues – ranging from security guards and social workers, ancillary staff and those in post-operation – are murmured to have been given the jab at the front of the line, arching some eyebrows.

"It doesn't make sense for things like post-op to go first, given that you have to have a negative test to get the surgery, to begin with," the source said. "It seems a scramble to ensure the vaccine doesn't go to waste, give it to whomever before it expires."

Indeed, the thawing process for the emergency-authorized vaccine comes with teething problems and a learning curve. Due to the temperature requirements, the vials must be refrigerated within three minutes after they are taken out if unused and have a fridge life of no more than 120 hours.

Kagya Amoako, associate professor of biomedical engineering at the University of New Haven, explained that thawing of the Pfizer vaccine from -70C to 2-8C could be done by transferring the frozen vaccine vials into a 2-8C temp refrigerator. The vaccine reaches 2-8C temperature after about three hours and it can be stored in this condition for five days. 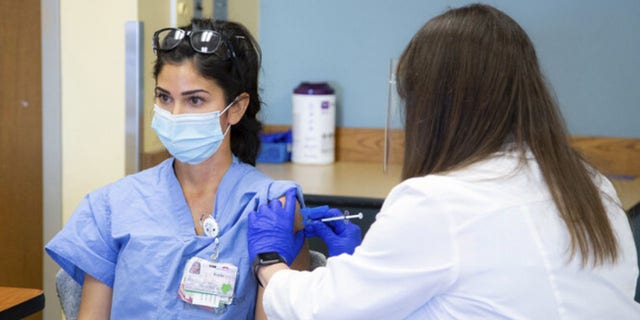 The precise process means that those administering the shots must have a clear picture of exactly how many vaccines will be issued in a specific time frame, prompting further questions over what happens if patients are late for appointments or unable to show at the designated time.

A spokesperson for NewYork-Presbyterian told Fox News that they are "proud to have vaccinated thousands of patient-facing employees in just over a week, and we will continue to do so until everyone receives a vaccine."

"We are following all New York State Department of Health guidelines on vaccine priority, with our initial focus on ICU and Emergency Department staff and equitable access for all," the statement continued.

Nonetheless, the challenges of vaccine distribution for hospitals far and wide remains challenged by chaos and confusion – a logistical riddle unique to the modern era.

More than 100 protesters took to the lawn outside Stanford Medical Hospital on Friday, anguished over the process. In the throes of an infection swell in California, the front-line health care professionals bemoaned that a bungled algorithm – which crashed scheduling applications and failed to prioritize those most at risk – had meant that those working from home or not directly vulnerable to the pathogen had received the potentially lifesaving stabs ahead of them.

"One of the most upsetting 24 hours I have ever experienced. The rollout was an absolute mess. Pledges that were made were not followed through on," Ronald Witteles, program director at Stanford's internal medicine residency program, tweeted. "Housestaff were rightly upset to (for all practical purposes) be completely left out of the first wave. They are our very definition of frontline physicians."

Witteles emphasized that in an attempt to ensure equity, distribution was via an algorithm – an algorithm he depicted as "well-intentioned but clearly hopelessly flawed."

"The lack of a sanity check being done on its output before it was put into action was a shocking and inexcusable error," he continued.

Stanford Medicine has since stated that it takes "complete responsibility for the errors in the execution of (the) vaccine distribution plan" and told Fox News in a statement Tuesday it "immediately revised (its) allocation plan over the weekend" and now has a new plan in place.

"We were able to successfully vaccinate more than 2,000 health care workers through Sunday night. Our revised distribution plan, driven by the same principles of equity and ethics, prioritizes healthcare workers in our clinical settings," a spokesperson said. "With additional shipments of vaccines expected in the coming weeks, we are optimistic that all our frontline health care workers will be offered the vaccine within the next two weeks, with our remaining workforce to follow as soon as possible."

Similar bouts of upset and frustration were also projected by doctors in Boston's Mass General Brigham system. Late last week, its online scheduling sites crashed, and rather than wait in long lines for the vaccine, many had to return to tending to their critically ill coronavirus patients.

Dr. George Alba, a pulmonary and critical care physician at Massachusetts General Hospital, pointed to watching "time slip away" as appointments were immediately zapped up when the system started working again.

The top brass of the most extensive hospital system in Massachusetts has also apologized for the gaffes caused by an overload of users, insisting that the glitches were fixed by the following day and that more vaccine shipments are expected to accommodate the workers in need.

"As of this morning, we have administered the first dose to 3,776 employees – a rate of nearly 900 per day," a representative for Mass General Brigham told Fox News on Tuesday. "Another 3,849 appointments have been scheduled.

Tech and temperature obstacles aside, during week one of the mass immunization endeavor – in which Pfizer disseminated some 2.9 million doses of the fast-developed vaccine – logistics and location also became a point of contention for some.

Karl E. Minges, assistant professor and chair for the department of health administration and policy at the University of New Haven, asserted that the chaos mainly originates from an inaccurate number of vaccines being distributed to states.

"Some states received the number they expected, while others were shorthanded," he said. "This logistics issue led to confusion among states."

Moreover, some hospitals and aged-care facilities in more rural areas have deplored that they missed out as they did not have the necessary freezers to store the vaccine at the frigid temperatures required for effectiveness. Thus, facilities equipped with these freezers are more inclined to be given the vaccine first.

Many facilities in the more remote pockets have had to wait for this week's rollout of the Moderna vaccine, which can be kept at slightly warmer temperatures more applicable to standard medical freezers.

Dr. Katie Passaretti, who serves as the medical director of infection prevention with Charlotte, N.C.-based Atrium Health, also highlighted that among the challenges associated with storage, thawing, preparation and short stability of the vaccine – which requires careful coordination to meet demand without wasting – is that in her state, "COVID-19 Vaccine Management System (CVMS) is not integrated with EMR systems, so documentation has been challenging."

EMR refers to cloud-based emergency medical records, which can be accessed more broadly. This is pivotal for the second shot, given that both Pfizer and Moderna require a booster shot within a three-to-four-week window, respectively.

But the problems don't stop there.

"In California, there are still frontline providers such as outpatient providers – those providers who are affiliated with a hospital system but work at primary care clinics or other ambulatory care centers are not being vaccinated," noted Dr. Attila Hertelendy, an emergency management and health policy expert and an assistant professor at the Florida International University in Miami. "This is a significant issue with the surge in cases in California. These providers will be called in to help with the surge and are not vaccinated."

And adding to procedural woes for hospital management is that many have to opt for an alternating distribution approach to ensure that there will still be staff equipped to work in case some develop side effects and need a small window of time off. This can happen with any medication or immunization and can range from fatigue and fever to body aches and nausea.

At this stage, hospitals and facilities do not appear to be mandating their personnel for vaccination – and there remains some hesitancy.

One respiratory therapist at a Los Angeles hospital told Fox News that while the rollout so far has been pretty organized, he estimates that roughly 60% of even front-line workers are not yet willing to be among the first to take it.

"We know how long it takes to develop and test a vaccine to ensure it is safe," the therapist, who was not authorized to speak on the record, said.

A CDC survey released late last month determined that just 63% of public health workers said they would take the rapidly developed vaccine, although many expect that confidence will rise in coming weeks as more people receive it.

Despite the "Operation Warp Speed" and the unprecedented time it took for vaccine development, which in most scenarios can take several years and even beyond a decade to get right, many medical, scientific and political leaders are underscoring its efficacy as vital to push past the pandemic.

Despite the desperation of many medical professionals who have been haplessly battling the pandemic yet still waiting for their vaccine, members of Congress and the upper echelons of government have already started receiving their shots.

"The reason has less to do with a concern of risk of exposure and more to do with visibility," Minges pointed out. "If people in power are seen on television and social media getting the vaccination, then that bolsters the argument that the vaccine is safe and efficacious."

But not all agree it's the right thing at this time.

"Front-line health care workers should be the priority," added Hertelendy. "Members of Congress are not treating patients."

As it stands, almost 18.5 million people in the U.S. have been infected by the novel contagion, which emanated from the Chinese province of Wuhan in late 2019. Nearly 330,000 have lost their lives as a result of associated complications.