Hayden Askins, 24, has now been taking Kaftrio for a fortnight after he had been denied it. Last month, the Daily Express revealed how NHS England red tape meant the pill was being ­withheld from some of the sickest patients. Hayden’s father, comedian Andy Askins, 57, found repeated requests to NHSE for his struggling son to get Kaftrio were flatly refused.

But, following our revelations, Hayden has now been granted the treatment.

And yesterday he told us how after only a fortnight he has already seen a transformation in his health.

Hayden, of Trowbridge, Wilts, said: “Since being a teenager, every day has been difficult until I started Kaftrio. I would struggle up the stairs or have a shower while coughing all the time and I ­barely ate.

“Three weeks ago, I was bed sleeping two-thirds of the day, ­unable to eat, losing weight quickly. A good day was a struggle, a bad day a nightmare.

“I used to get out of breath just standing. Now I can take a clear, deep breath. This drug is not a cure for CF but it feels like it. The idea other CFers are being denied that clear breath is horrendous.”

NHSE insist they have now written to all CF clinicians to issue Kaftrio if it is needed – yet hundreds of patients are still without. 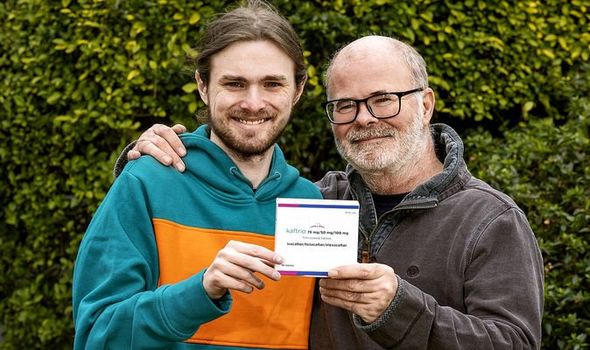 Like many in England being denied Kaftrio, the excuse given to Hayden was that he was already taking one of US firm Vertex’s three older drugs, in his case Kalydeco.

Hayden said: “Kaftrio and Kalydeco are leagues apart. I will always say for the last eight years Kalydeco has kept me alive.

“But they are so different. Kaftrio will not just keep me alive, it will actually let me live.

“People are not being given it, due to NHSE funding or clinicians. It is extremely frustrating. Kaftrio is not just a life-saver, it’s a life-giver. It is an immediate drug.”

Delighted father Andy said: “Hayden feels fantastic and is laughing and joking. Thank you so much to the Daily Express for ­fighting with us.

“The other day he did an eight-minute run on the treadmill. Before, he was barely able to walk up stairs.

“Now he’s talking about his future which is incredible as we dreaded to discuss things like that before.”