Fathers who suffer from postnatal depression are more likely to have daughters who go on to develop mental health problems in their teens, researchers claim.

Studies are increasingly showing that the birth of a child can result in depression among men as well as women. 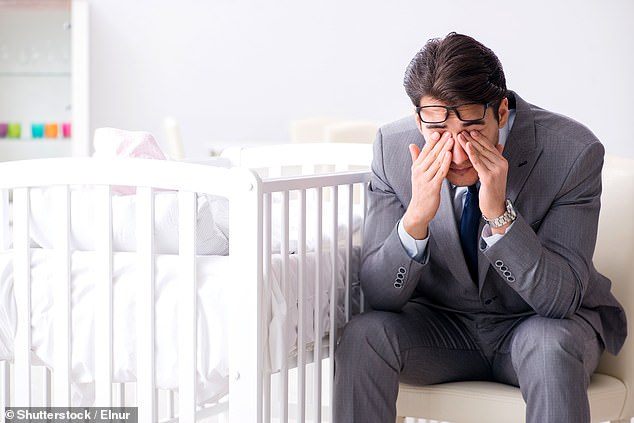 Now this has been linked to poor teenage mental health by research into 3,000 families from around Bristol.

Girls were more likely to suffer depression aged 18 if their fathers had experienced it following their birth.

Sons, however, were found to be unaffected, according to researchers from the universities of Cambridge, Bristol, Oxford, and Imperial and UCL in London.

Writing in the JAMA Psychiatry medical journal, the authors said: ‘We have found girls with fathers with depression during the postnatal period are at risk of developing depression after puberty, but such risk is not seen in boys.’

The researchers believe this could be because girls may be more sensitive to the way their fathers interact with them as a baby, with long-term results.

For boys this seems to have just a short-term effect, they suggest.

A father’s depression is also likely to trigger the condition among mothers, with knock-on effects on daughters, the researchers said.

Professor Paul Ramchandani, of the University of Cambridge, said: ‘Research from this study of families in Bristol has already shown fathers can experience depression in the postnatal period as well as mothers.

‘What is new in this paper is that we were able to follow up the young people from birth through to the age of 18.

‘It appears that depression in fathers is linked with an increased level of stress in the whole family, and that this might be one way in which offspring may be affected.’

He said the study highlighted the importance of helping depressed fathers.

A lack of sleep or difficulty adjusting to parenthood can lead to postnatal depression in fathers, charities say.

And evidence is also emerging to say hormonal changes may also be to blame, just as they are among mothers.

WHAT IS POSTNATAL DEPRESSION?

Postnatal depression is a form of the mental-health condition that affects more than one in 10 women in the UK and US within a year of giving birth.

As many men can be affected as women, research suggests.

Many parents feel down, teary and anxious within the first two weeks of having a child, which is often called the ‘baby blues’.

But if symptoms start later or last longer, they may be suffering from postnatal depression.

Postnatal depression is just as serious as others form of the mental-health disorder.

Sufferers should not wait for their symptoms to just go away.

Instead they should recognise that it is not their fault they are depressed and it does not make them a bad parent.

If you or your partner may be suffering, talk to your GP or health visitor.

Treatments can include self-help, such as talking to loved ones, resting when you can and making time to do things you enjoy. Therapy may also be prescribed.

In severe cases where other options have not helped, antidepressants may be recommended. Doctors will prescribe ones that are safe to take while breastfeeding.

Postnatal depression’s cause is unclear, however, it is more common in those with a history of mental-health problems.

Lack of support from loved ones, a poor relationship with the partner and a life-changing event, such as bereavement, can also raise the risk.