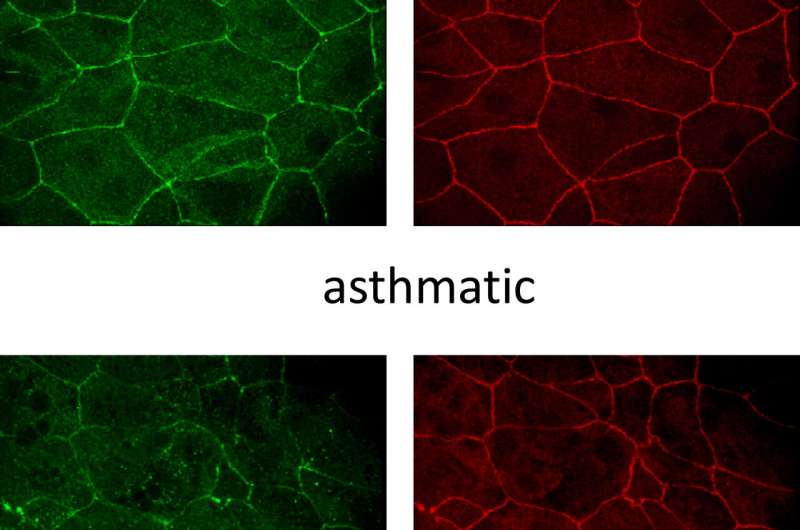 Humans are exposed to a variety of toxins and chemicals every day. According to the epithelial barrier hypothesis, exposure to many of these substances damages the epithelium, the thin layer of cells that covers the surface of our skin, lungs and intestine. Defective epithelial barriers have been linked to a rise in almost two billion allergic, autoimmune, neurodegenerative and psychiatric diseases.

Epithelial cells form the covering of most internal and external surfaces of the human body. This protective layer acts as a defense against invaders—including bacteria, viruses, environmental toxins, pollutants and allergens. If the skin and mucosal barriers are damaged or leaky, foreign agents such as bacteria can enter into the tissue and cause local, often chronic inflammation. This has both direct and indirect consequences.

Cezmi Akdis, Director of the Swiss Institute of Allergy and Asthma Research (SIAF), which is associated with the University of Zurich (UZH), has now published a comprehensive summary of the research on epithelial barrier damage in Nature Reviews Immunology. “The epithelial barrier hypothesis proposes that damages to the epithelial barrier are responsible for up to two billion chronic, non-infectious diseases,” Professor Akdis says. In the past 20 years, researchers at the SIAF alone published more than 60 articles on how various substances damage the epithelial cells of a number of organs.

Rise in allergic and autoimmune conditions

The epithelial barrier hypothesis provides an explanation as to why allergies and autoimmune diseases have been increasing for decades—they are linked to industrialization, urbanization and westernized lifestyle. Today many people are exposed to a wide range of toxins, such as ozone, nanoparticles, microplastics, household cleaning agents, pesticides, enzymes, emulsifiers, fine dust, exhaust fumes, cigarette smoke and countless chemicals in the air, food and water. “Next to global warming and viral pandemics such as COVID-19, these harmful substances represent one of the greatest threats to humankind,” emphasizes Akdis.

Local epithelial damage to the skin and mucosal barriers lead to allergic conditions, inflammatory bowel disorders and celiac disease. But disruptions to the epithelial barrier can also be linked to many other diseases that are characterized by changes in the microbiome. Either the immune system erroneously attacks “good” bacteria in healthy bodies or it targets pathogenic—i.e. “bad”—invaders. In the gut, leaky epithelial barriers and microbial imbalance contribute to the onset or development of chronic autoimmune and metabolic diseases such as diabetes, obesity, rheumatoid arthritis, multiple sclerosis or ankylosing spondylitis. Moreover, defective epithelial barriers have also been linked to neurodegenerative and psychiatric diseases such as Parkinson’s disease, Alzheimer’s disease, autism spectrum disorders and chronic depression, which may be triggered or aggravated by distant inflammatory responses and changes in the gut’s microbiome.