The number of women seeking ‘designer vaginas’ has doubled in recent years due to the rising popularity of sports leggings, a top plastic surgeon claims.

Labiaplasties involve reducing the size of the labia minora — the flaps of skin either side of the vaginal opening — and cost up to £4,000.

Dr John Skevofilax, chief surgeon at Signature Clinics, said he performed around 50 of the procedures in 2021.

But a surge in demand in the last year meant he had already surpassed that number by the first half of 2022.

Dr Skevofilax told MailOnline women were increasingly seeking labiaplasty because tight clothing like leggings are uncomfortable and ‘draws attention to the labia’.

‘Exercise clothing is a little bit tighter and it’s formfitting so it does put pressure on the area,’ he said.

‘They experience pain, discomfort in general, chaffing, a lot of women actually will feel so uncomfortable that they avoid trying to wear this type of clothing.

‘It’s all really interlinked, choosing a pair of leggings which causes discomfort and which in turn draws attention to the labia and the need for surgery.’ 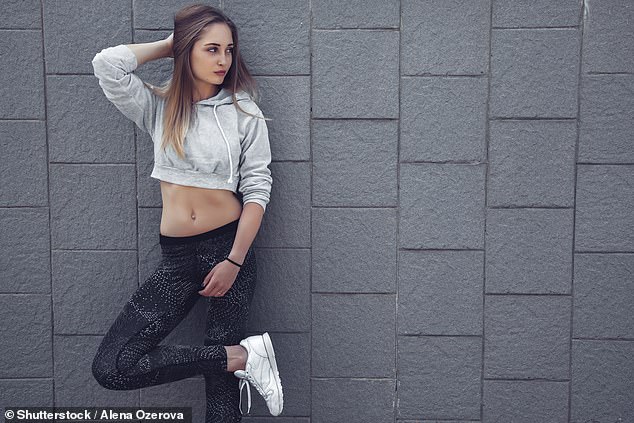 A rise in wearing tight leggings that put pressure on the labia causing pain and discomfort could be why more women are seeking labiaplasty, a top surgeon claims (stock image)

Labiaplasty is surgery to reduce the size of the labia minora – the flaps of skin either side of the vaginal opening.

It involves cutting away unwanted tissue with a scalpel of laser in procedure that takes about one to two hours.

Some women have labiaplasty because they do not like the look of their labia.

However the NHS advises that it’s completely normal to have noticeable skin folds around the opening of your vagina.

As in most cases this does not cause any problems labiaplasty is rarely available on the NHs.

Women considering labiaplasty are urged to speak to their GP first who may encourage them to speak to a counsellor or psychologist before undergoing surgery.

In the UK, a labiaplasty costs about £2,000 to £4,000, though the cost can vary depending on the extent of the procedure.

Labiaplasty is generally only offered in exceptional circumstances, such as to remove cancerous tissue in cases of vulval cancer.

Leggings are thought to have become trendy in the 1970s thanks to some of the decade’s biggest celebrities like Debbie Harry and the late Olivia Newton-John.

But in recent years they have been replaced by skin-tight sports leggings that have coincided with the rise in gym culture.

Sometimes referred to as ‘athleisure’ – a mix between gym and casual wear – the style has been popularised by reality TV stars the Kardashians.

Dr Skevofilax said that 80 per cent of women seeking labiaplasty were now looking to fix discomfort while wearing tight clothing rather than for aesthetic reasons.

Designer vaginas were previously thought to have been fuelled by unrealistic body images in pornography.

But Dr Skevofilax said this was a ‘dangerous and misleading’ as it fostered a sense of shame for women seeking help for pain they experience going about their lives.

‘Women should be able to wear whatever they want to wear,’ he said.

‘If they choose tight clothing, for instance yoga pants because they are following a specific fashion trend or just because it’s simply more fitting for this type of exercise, they should be able to do so without anxiety and “a bite of the lip” of what’s to come.

Dr Skevofilax instead attributed a rise in labiaplasty to women being more open about their experiences with pain from wearing tight clothing and the solutions.

Where women do want labiaplasty for aesthetic reasons Dr Skevofilax said he had a long chat during the consultation to ensure the treatment was right for them.

‘By doing this we can make sure people are making the right decisions for themselves,’ he said.

Labiaplasty involved using a scalpel or laser to reduce the size of the labia minora – the flaps of skin found either side of the vaginal opening.