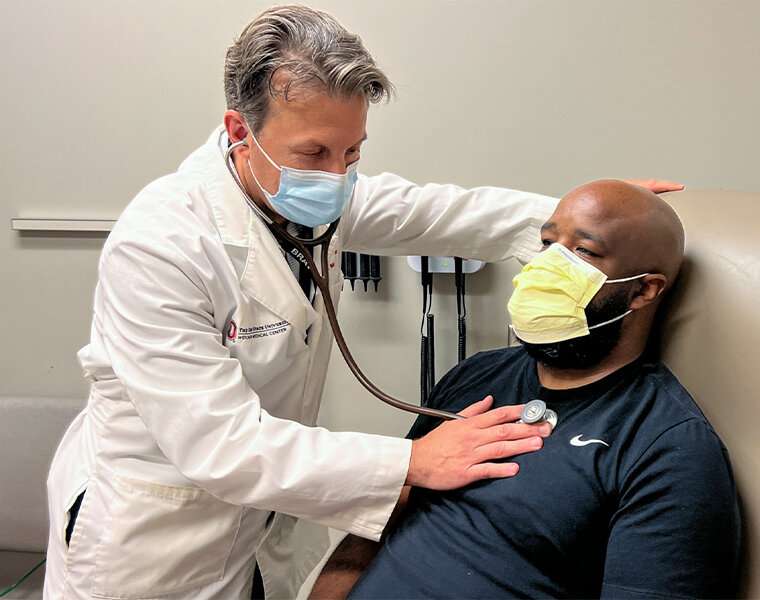 An unexplained case of severe coronary artery disease in a seemingly healthy young man led scientists at The Ohio State University Wexner Medical Center and College of Medicine to a discovery that could lead to a new way to treat high cholesterol.

Ohio State scientists discovered rare genetic mutations that had never been identified before and that could cause severe early onset of coronary artery disease, the most common type of heart disease in the United States. The discovery is leading to a better understanding of how cholesterol functions and the possibility of developing safer therapeutics for the 94 million Americans with high cholesterol.

Marcus Wright of Delaware, Ohio was 27 when he suffered a heart attack and continued to have heart-related problems. Doctors were puzzled after finding out he had severe coronary artery disease despite being active and eating a healthy diet. He was eventually referred to Dr. Ernest Mazzaferri, Jr., an interventional cardiologist at Ohio State’s Richard M. Ross Heart Hospital and a clinical professor of Internal Medicine.

“When I met Marcus about 14 years ago, he looked like a linebacker for the Ohio State Buckeyes. He was super fit and active. He was the last guy that you would ever think would have this kind of disease,” said Mazzaferri, co-interim director of Ohio State’s Heart and Vascular Center. “His cholesterol and inflammation numbers looked pretty good and there was no family history of heart disease at that point, so it didn’t make sense why somebody like him would have such advanced disease.”

Despite optimal medical therapy, Wright continued to have symptoms and needed multiple heart stents, which are expandable metal coils placed in a blocked blood vessel to keep the arteries open. When both Wright’s mother and younger brother were later diagnosed with severe coronary artery disease, Mazzaferri suspected there was a genetic link. He decided it would be a good case for Ohio State’s JB Project, which is funded by philanthropy and brings together clinicians and scientists to decipher the root cause of highly unusual cases involving coronary artery disease, arrhythmias and heart failure.

“Marcus became the first patient I ever presented to our genetic scientists and I said, ‘Nobody can figure out what’s wrong with this young man. I need your help to understand what’s wrong with him,'” said Mazzaferri, who holds the Charles A. Bush, MD Professorship in Cardiovascular Surgery.

A team of researchers led by Sara Koenig, assistant professor of Internal Medicine, conducted genetic sequencing of Wright’s DNA and identified unique genetic variants that were causing his advanced disease. To better understand the potential implications of these genetic mutations, Koenig expanded her study, identifying the same mutations in his mother, father and brothers.

“This gene encodes a receptor for HDL, which is classically referred to as your good cholesterol,” Koenig said. “We hypothesize that good cholesterol does not function as well in these individuals as the general population.”

The researchers determined that Wright’s genetic variants prevented his good cholesterol from effectively clearing out his bad cholesterol (known as LDL), leading to his advanced coronary artery disease. Their findings were published in the American Heart Association’s Circulation Research.

“The identification of these specific variants in Marcus and his family and knowing that they are causing coronary artery disease sheds lights on a new pathway that we can approach for cholesterol mediated therapy,” Koenig said.

Researchers examined 788 FDA drugs approved for various diseases to narrow down which ones may promote a healthy HDL function. They are now working on developing different diagnostic tests and a new therapeutic drug that may provide an alternative option for those living with high cholesterol.

“Genetics play a really important role in cholesterol and cardiovascular disease. Even if you’re doing everything right by exercising and eating the right foods, some people are just predisposed to high cholesterol and coronary artery disease, which is exactly what happened to Marcus,” Koenig said. “The issue with statins, which lower your cholesterol, is that they’re not 100% effective. We’ve identified a handful of drugs that promote the good HDL pathway or reverse cholesterol transport. Now we are investigating these drugs in animal and human cell models in the hope that we can identify how they affect the pathway and develop more targeted therapies.”

Over the years, Mazzaferri has made changes to Wright’s medications and now only sees him once a year.

“We do the things we do with the hope that we’re going to be able to impact people’s lives, and to have a group like the JB project work together over a couple year period to really solve a problem like this was one of the most memorable things I’ll ever have in my career,” Mazzaferri said.

Knowing what was causing his heart problems and learning he probably didn’t pass the genetic mutations along to his three children was a relief for Wright.