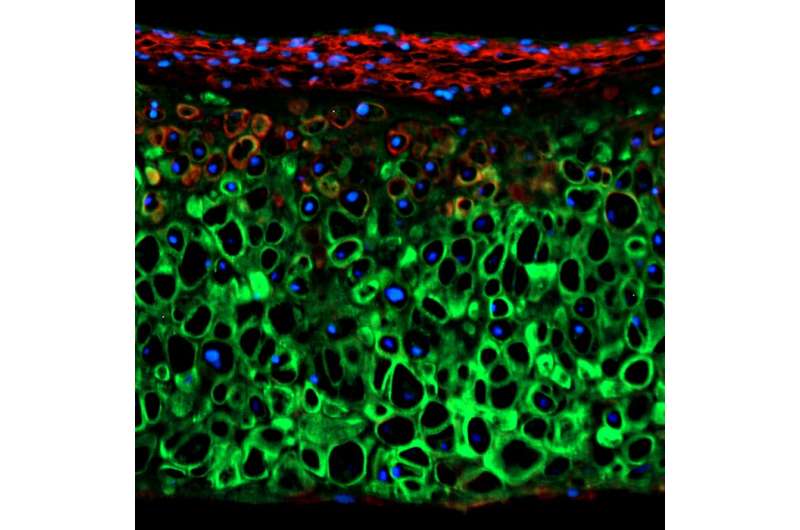 New information from a study reported in Stem Cells might result in more effective treatments for osteoarthritis and other cartilage diseases, as well as hereditary disorders affecting cartilage development. Their findings might also point to a new way to accelerate stem cell differentiation for bioengineering cartilage, the researchers say.

The team, from Cytex Therapeutics (Durham, N.C.) and Washington University (St. Louis, Mo.), has demonstrated that a gene called transient receptor potential vanilloid 4 (TRPV4) serves as both a marker and a regulator of chondrogenesis—the process by which cartilage and bone are formed. TRPV4 works for the body by providing instructions to build channels that transport calcium across cell membranes. Studies suggest that the TRPV4 channel plays a role in a number of body functions, including chondrogenesis. Its effects on skeletal development appear to involve the regulation of stem and progenitor cell differentiation.

Pluripotent stem cells are a type of stem cell that have the ability to self-renew and give rise to all cells of the body’s tissues. They represent a single source for replacing cells lost to damage or disease. That ability has led researchers to investigate the use of induced pluripotent stem cells (iPSCs), which can be generated directly from adult cells, in developing new therapeutics for disease modeling, regenerative medicine and drug discovery.

In this study, the researchers utilized iPSCs to create a modeling system for studying TRPV4.

Farshid Guilak, Ph.D., from the Center of Regenerative Medicine at Washington University, was corresponding author. He explained, “We wanted to learn whether TRPV4 is specifically expressed as a marker of chondrogenesis, and also if it plays a functional role in regulating chondrogenesis in iPSC-derived chondrocytes—the cells responsible for cartilage formation.”

To accomplish this, Dr. Guilak and colleagues used a fluorescent indicator to monitor chondrogenic differentiation from murine (mouse) iPSCs. Results showed that over the 21-day chondrogenesis process, TRPV4 expression mirrored that of classic chondrogenic markers produced naturally by the body.

“Furthermore, daily activation of TRPV4 significantly increased cartilage matrix production,” Dr. Guilak said. (Cartilage matrix is a mixture of collagen and proteins that help cartilage attract water and give it its shape and specific properties.)

“These findings tell us that, as we suspected, TRPV4 serves as both a marker and a regulator of iPSC chondrogenesis,” he added. “We believe that iPSC chondrogenesis could be an excellent model system for studying TRPV4’s role in cartilage development and diseases. An improved understanding of how this occurs promises to provide new insights into the development of new therapeutic approaches for cartilage-related disorders.

“Additionally, it could lead to a new way of optimizing stem cell differentiation when bioengineering cartilage designed for knee replacements and other joint repairs.”