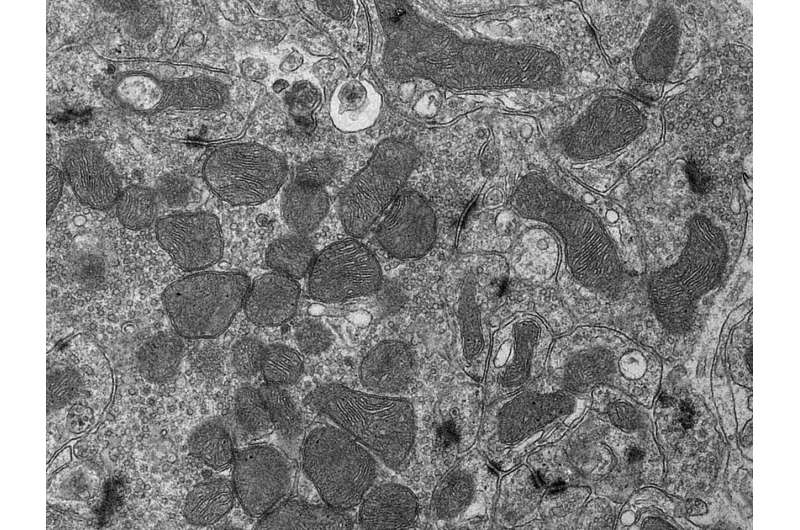 Mitochondria are the energy suppliers of our body cells. These tiny cell components have their own genetic material, which triggers an inflammatory response when released into the interior of the cell. The reasons for the release are not yet known, but some cardiac and neurodegenerative diseases as well as the aging process are linked to the mitochondrial genome. Researchers at the Max Planck Institute for Biology of Aging and the CECAD Cluster of Excellence in Aging research have investigated the reasons for the release of mitochondrial genetic material and found a direct link to cellular metabolism: when the cell’s DNA building blocks are in short supply, mitochondria release their genetic material and trigger inflammation. The researchers hope to find new therapeutic approaches by influencing this metabolic pathway.

Our body needs energy—for every metabolic process, every movement and for breathing. This energy is produced in tiny components of our body cells, the so-called mitochondria. Unlike other cell components, mitochondria have their own genetic material, mitochondrial DNA. However, in certain situations, mitochondria release their DNA into the interior of the cell, causing a reaction from the cell’s own immune system and being associated with various diseases as well as the aging process. The reasons for the release of mitochondrial DNA are not yet known.

To answer the question of when mitochondria release their DNA, researchers at the Max Planck Institute for Biology of Aging have focused on the mitochondrial protein YME1L, which owes its name to yeast mutants that release their mitochondrial DNA—yeast mitochondrial escape 1. “In cells lacking YME1L, we observed the release of mitochondrial DNA into the cell interior and a related immune response in the cells,” said Thomas MacVicar, one of the study’s two first authors. Closer examination revealed a direct link to the building blocks of DNA. “If the cells lack YME1L, there is a deficiency of DNA building blocks inside the cell,” Thomas MacVicar describes. “This deficiency triggers the release of mitochondrial DNA, which in turn causes an inflammatory response in the cell: the cell stimulates similar inflammatory reactions as it does during a bacterial or viral infection. If we add DNA building blocks to the cells from the outside, that also stops the inflammation.”

New therapeutic approaches based on the metabolism of DNA building blocks