UK will be unable to deploy any troops abroad unless the Government fixes pension crisis that is causing military doctors to quit, leading medics warn

The UK will be unable to deploy troops abroad to war zones if the doctors’ pension crisis isn’t sorted, leading medics have warned.

Almost all doctors working in the military are thought to have plans to quit within a year due to the rules, which are also affecting the NHS.

The current scheme is driving doctors to cut their hours, retire early or leave the profession entirely, according to the British Medical Association.

The Defence Medical Services, which supplies dental and medical services to the British Army, currently has a 23 per cent shortage in staff.

The BMA voted in favour of a motion calling the Government to take urgent action to halt the number of medics leaving the Armed Forces. 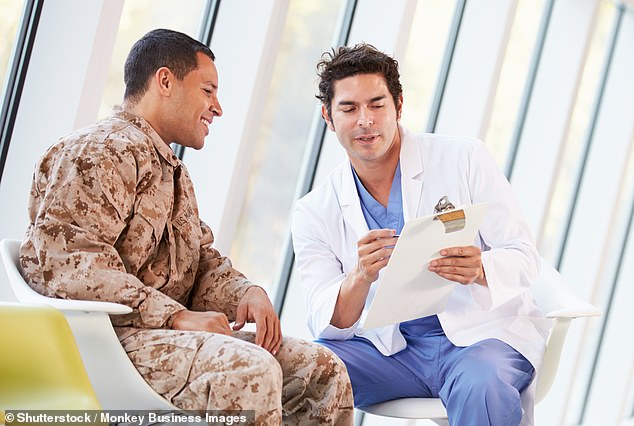 The doctors’ pension crisis now threatens armed forces and almost all in the military have plans to quit within the next year, according to the British Medical Association

Current tax rules mean that doctors working both within the NHS and Armed Forces face high tax bills on their pensions if they exceed set limits.

Doctors are trying to avoid big tax bills from stricter pension rules that put a cap on their saving allowances.

The policy has a ‘disproportionate effect’ on military doctors, who are expected to retire earlier and therefore accrue their pension faster, the meeting heard.

Dr Adam Collins, who proposed the motion, said for doctors in the military, the rules lead to ‘bigger breaches of the annual allowance much earlier in the career’.

‘These impacts of the punitive pension taxation scheme, exacerbated as they are for armed forces’ doctors, are now the most commonly cited cause for armed forces doctors to leave the service prematurely,’ he told delegates.

‘Indeed, in a document seen by the armed forces committee, within some key specialities, every consultant has indicated an intention to resign from service within the next 12 months.

‘If this situation is allowed to continue, loss of key specialities will mean that MoD will be unable to deploy a military hospital abroad.

‘This in turn would mean that MoD would be unable to deploy troops abroad for whatever reason the country may need.’

Responding to the vote, Dr Nagpaul said a significant number of Armed Forces are being driven away both anecdotally and from informal intelligence.

He said: ‘The Defence Medical Services (DMS) is facing a workforce crisis; the latest available data shows that that are 558 trained medical officers in the Armed Forces when operational capacity should be at 723, a 23 per cent shortfall.

‘Armed forces doctors are being driven away by government policy that is penalising experienced doctors with exorbitant and unexpected tax bills on their pensions.

‘As with their colleagues in the NHS, these valuable medical professionals are having to reduce their working hours or considering ending their careers early as they are effectively punished for working tirelessly to care for patients.’

He added: ‘While tax reform is the long-term solution to this problem, the BMA is also pressing for flexibilities to be introduced into the NHS and armed forces’ pension scheme, to give public servants the same freedom to avoid these punitive taxes that is enjoyed by workers in the private sector.

‘Without action, the defence medical services will continue to haemorrhage talented medics, putting at serious risk the armed forces’ ability to deploy.’

Restrictions which came into effect in 2016 mean doctors who earn more than £110,000 a year enter a ‘taper zone’ which triggers big tax bills.

This can reduce the annual allowance – the tax-free amount workers can contribute to their pension – to £10,000 for those earning £210,000.

HOW BAD IS THE CRISIS IN GP STAFFING?

Pressures on GP services are higher than ever. Since 2013 the number of people living in the UK has soared from 64million in 2013 to nearly 67million.

But the number of GPs has not kept pace. The NHS lost a net 441 fully-qualified GPs in the last year.

Figures show that that are 558 trained medical officers in the Armed Forces when operational capacity should be at 723, a 23 per cent shortfall.

Fewer young doctors are choosing to specialise as GPs, and are opting for more ‘macho’ career paths as surgeons or specialists.

Numbers of GPs are known to be dwindling in recent years, placing even more pressure on an over-stretched health service.

Many are retiring in their 50s, moving abroad or leaving to work in the private sector, as practices have threatened to close their waiting lists until action is taken.

This continued crisis has left many patients at risk, with staff unable to cope with the rising demand and slashed funding.

The British Medical Association (BMA) has warned that unless the NHS pension taxation scheme was reformed, more doctors would be lost.

In June, the doctors’ union requested an urgent meeting with Health Secretary Matt Hancock to see what can be done to halt amount of experienced doctors leaving.

Concerns about high-earning doctors’ pensions were raised in 2016. Doctors who earn more than £110,000 a year enter a ‘taper zone’ which triggers big tax bills.

The BMA have stressed the pension tax is having an impact on the Defence Medical Services, which organise medical and dental services within the British Armed Forces.

The shortage of doctors comes despite the NHS adopting a plan to recruit 5,000 extra GPs by 2021.

Meanwhile, a record 138 GP surgeries shut down last year, closing at a rate of more than two a week, affecting more than 500,000 patients.

As recently as 2013, just 18 surgeries shut across the UK. By last year that number had increased nearly eight-fold.