Historically, researchers haven’t paid much attention to the way we drink at home; the alcohol-fuelled problems when people go out at night – violence, accidents, illness, hospital admissions and social disorder – are far more visible.

But, even before lockdown, 56 per cent of risky drinking happened in the home. 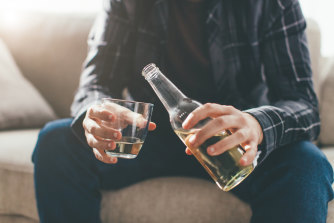 Since we’ve been stuck inside for the past two years, drinking at home has become the norm. The latest survey data, by the Alcohol and Drug Foundation (ADF), showed 25 per cent of Australians are drinking more now than before the pandemic started. And there is risk this coping mechanism will turn into a bad habit, says ADF chief executive, Dr Erin Lalor:

“Although restrictions have eased, the repercussions of another tough year are still being felt, so we urge people to leave behind unhealthy drinking habits as we move towards a ‘new normal’.”

Melbourne resident, Philippe, drank two-to-three nights a week before the pandemic. With lockdown, however, and the inability to play basketball with friends or relieve stress in other ways, he began drinking at home most nights of the week.

The 25-year-old started consuming half a bottle of vodka each night after work. It was, he says, a way to wind down and punctuate days that blurred together.

“It gave a content feeling – you have a couple of drinks and go ‘OK, now I feel better’,” says Philippe, who declined to use his surname for privacy reasons.

Though drinking offered some respite from the monotony and stress of lockdown, it came at a cost: “I’d wake up feeling like shit and work and just have negative thoughts all day… It was pretty hectic for a while.”

A new study, by researchers at La Trobe University’s Centre for Alcohol Policy Research, has sought to better understand why we tend to drink so much more at home.

So, for the qualitative study, they conducted in-depth interviews with 40 participants around Australia, who were aged between 30 and 65 and who drank at home at least once a week.

Half the participants consumed less than 14 standard drinks per week and half consumed at least 35 per week at home.

All the participants said that drinking at home was a form of marking the end of the day, and a way to enjoy being with family and friends.

The heavier drinkers, however, said it was also a way to smooth over dissatisfaction with close relationships at home.

“People would drink, so they didn’t feel disappointed they weren’t getting along with their spouse … or that things weren’t as they hoped them to be,” MacLean explains.

And while relaxation was another common theme – unwinding from work or from parenting duties – this was particularly the case for the heavier drinkers.

“They felt when they were able to drink, home became home-like – a place of comfort and respite,” says MacLean, who adds that while the lighter drinkers typically only drank at dinner, the heavier drinkers paired alcohol with a range of activities, from watering the garden to watching TV or ringing a friend. “It was part of almost everything they did at home.”

Getting drunk at home is also cheaper and easier: Alcohol is more affordable, participants didn’t feel judged, and they didn’t have to worry about getting home, they could just fall asleep on the bed. Some of the women felt safer drinking at home.

The lack of barriers, both to accessing alcohol and to stopping when we’ve had enough, was another factor in excessive consumption. “Home delivery of alcohol meant there were really no limits to how much they could drink at home … and it arrives cheaply and quickly,” says MacLean, who would like to see increased time restrictions on home-deliveries as well as more responsible service of alcohol.

Like Philippe, the participants also noticed downsides to their drinking. These included negative effects on their relationships and less engagement with work and other activities. Alcohol use is also a factor in up to 65 per cent of domestic violence incidents.

“The fact that drinking is happening at home doesn’t make it less damaging,” says Maclean, who urges people to find other ways to relax, celebrate or escape without using alcohol.

“Be mindful of not having a drink in your hand when you do everything at home – restricting it to one thing like dinner – and modelling for your kids that alcohol doesn’t need to be part of every activity.”

Philippe came to a similar conclusion.

“I started to lose my mind,” he says. “I wanted to wake up and be happy with myself.”

He replaced his drinking with exercise, losing 25 kilograms in the process and now only drinks once a week: “I definitely feel better – healthier and happier. I have a couple of drinks now and I kind of regret it.”