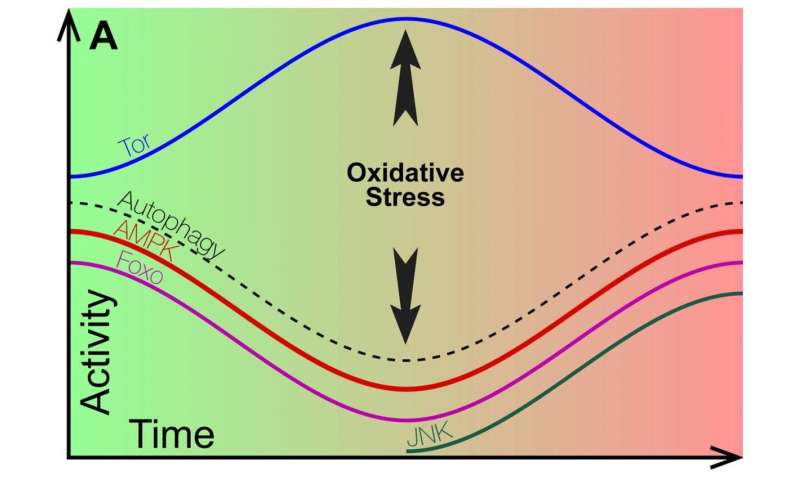 Rice University biochemists Michael Stern and James McNew have studied how neurodegeneration kills cells. They’ve conducted countless experiments over more than a decade, and they’ve summarized all they’ve learned in a simple diagram they hope may change how doctors perceive and treat degenerative diseases as varied as Alzheimer’s, Parkinson’s and muscle atrophy.

In a study published this month in Molecular Psychiatry, McNew and Stern propose that degeneration, at the cellular level, occurs in two distinct phases that are marked by very different activities of protein signaling pathways that regulate basic cell functions.

“We would like clinicians and other researchers to understand that the two phases of degeneration represent distinct entities, with distinct alterations in signaling pathways that have distinct effects on disease pathology,” Stern said. “In other words, we think that patients need to be treated differently depending on which phase they are in.”

Stern and McNew’s diagram shows how the activity of key cell signaling proteins either increases or decreases at the onset of degeneration, ultimately bringing about oxidative stress. Oxidative stress then brings about the second phase of the condition, during which degeneration occurs, where the signaling proteins implicated in the first phase behave in a completely different way.

Because cells behave quite differently in the two phases, the research suggests patients in different phases of a disease may respond differently to the same treatment.

“The two phases of degeneration haven’t been previously recognized, so it hasn’t been understood, clinically, that you have two different populations of patients,” McNew said. “Today, they’re treated like one population, and we think this has confounded clinical trials and explains why some trials on Alzheimer’s have given variable and irreproducible effects. It would be like trying to treat all meningitis patients with antibiotics without realizing that there are two types of meningitis, one bacterial and one viral.”

Stern and McNew, professors of biochemistry and cell biology in Rice’s Department of BioSciences, became interested in the cellular processes of neurodegenerative disorders when they began studying hereditary spastic paraplegia (HSP) in the late 2000s. A rare disorder, HSP is marked by numbness and weakness in the legs and feet due to the progressive deterioration of neurons that connect the spine and lower leg.

These are some of the longest cells in the body, and starting with clues about structural defects that could cause them to degenerate, McNew and Stern used experiments on fruit flies to systematically piece together the biochemical domino effect that caused the neurons to progressively lose more and more function and eventually die. It had been thought that nerve damage could lead to muscle atrophy, but their studies found that muscle cells attached to the neurons started degenerating from the same type of biochemical cascade before the nerve cells died.

A key player in the cascade was a protein called TOR, a master regulator of cell growth and an essential protein for all higher order life from yeast to humans. TOR acts like a knob, dialing growth up or down to suit the conditions a cell is experiencing. In some conditions, high growth is warranted and beneficial, and in other situations growth needs to be dialed back so energy and resources can be conserved for daily chores, like the recycling or repair that take place during a process known as autophagy.

Some cancers highjack TOR to promote aggressive cell growth, and increased TOR activity has also been implicated in neurodegenerative disorders like Alzheimer’s and Parkinson’s diseases and in diseases marked by muscle atrophy. After compiling evidence about how TOR and several other signaling proteins behaved in neurodegeneration, McNew and Stern won a grant from the National Institute of Neurological Disorders and Stroke in 2018 for experiments to investigate signaling pathway changes that occur in the early stages of degeneration.

“At the time, we thought there might be a late phase during which degeneration actually occurs, but we didn’t propose any experiments to test that,” Stern said. “In the new paper, we’re explicit about the existence of a late phase. We propose mechanistically why degeneration occurs only during this phase, and cite abundant research in support.”

Stern said the two-phase process described in the study “is the basic engine that drives most or even all forms of degeneration forward. However, in addition, there are also inputs whose role is to specify how fast the engine turns over.”

To understand neurodegeneration, it’s critical to understand how those inputs work, he said. For example, insulin resistance plays a well-known role in driving Alzheimer’s disease, and in the study McNew and Stern describe how it does that by accelerating progression through the early phase.

“Similarly, our data suggests that decreases in synaptic transmission, as occurs in our HSP insect model, likewise triggers degeneration by accelerating progression through the early phase,” McNew said. “Our NIH grant was funded so that we could learn the mechanism by which that occurs.”

Now that they clearly understand that two phases of degeneration exist, Stern said he and McNew would like to carry out more experiments to see how the effects of specific genes on degeneration are altered when they are activated in the early and late phases.