More than 1,000 people have now been infected with Ebola in the Democratic Republic of the Congo.

The death toll stood at 639 in the African nation yesterday, as the outbreak of the deadly virus enters its eight month.

Health workers are still struggling to contain the infection, which has killed almost two thirds of people who have caught it.

In the past month five treatment centres have been violently attacked, the country’s health ministry said, and people still don’t trust the medics. 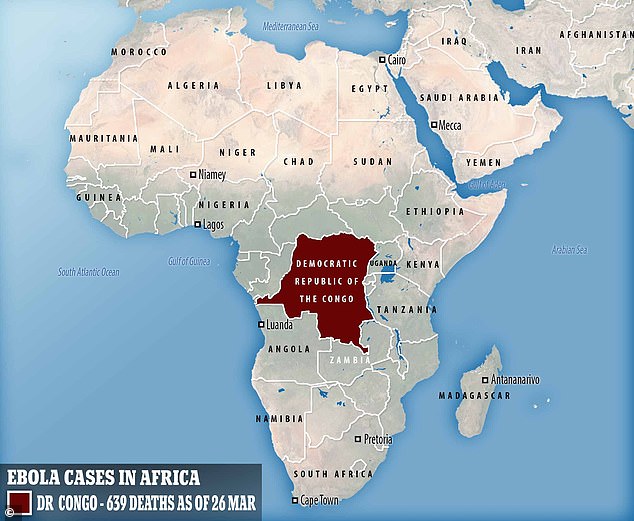 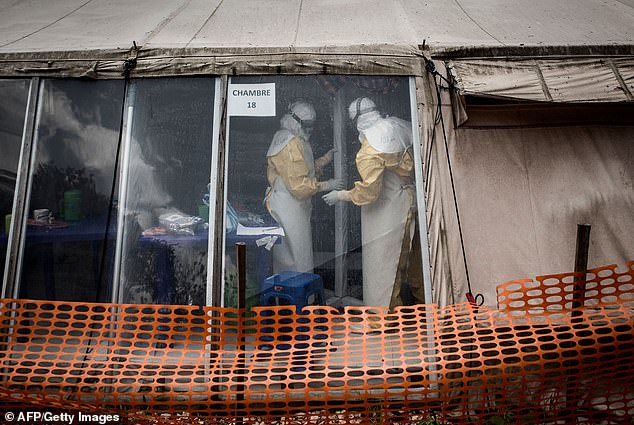 The cities of Katwa and Beni have borne the brunt of the outbreak, with more than 500 cases and 333 deaths between them. Some 75 people have died in Butembo, where health workers are pictured in a treatment centre which was attacked by militants

Last week, authorities confirmed the virus – which causes severe fevers and uncontrollable bleeding – had spread to the city of Bunia and killed at least one.

Around a million people live in the city, which is 125miles (201km) north of Beni, where most of the outbreak has been centered.

The government said it has managed to ‘limit the geographical spread’ of the disease, but authorities are under no illusions about stamping it out.

‘I think all of us in the field are aware that we’re very far from being near the end of this outbreak,’ said Tariq Riebl, a member of the International Rescue Committee.

‘The increase in cases also shows we are catching up with all the transmission that we haven’t previously been aware of.’

In recent weeks, more than 40 percent of new cases in the hotspot towns of Katwa and Butembo had no known links to other cases, meaning doctors have lost track of where the virus is spreading.

Health workers have been better prepared than ever for the latest epidemic, which has become the second largest ever.

New technologies like a trial vaccine, experimental treatments and futuristic cube-shaped mobile units for treating patients have helped curb the spread of the virus.

But public mistrust and insecurity have hampered the response.

The World Health Organization said many people are still refusing to seek medical care and are dying at home.

This puts their family and neighbours at high risk of getting the contagious illness, which still spreads after someone has died.

WHO teams often visit communities with a police escort for security reasons, a move which could undermine community trust.

Mr Reibl added: ‘We understand why some people might be scared of this and we believe that the use of force should be a last resort.’

Figures published by the DRC’s health ministry yesterday showed 1,022 people have been infected in total.

Some 957 of those cases have been confirmed – 324 people have been cured but nearly twice as many have died.

The cities of Katwa and Beni have borne the brunt of the outbreak, with more than 500 cases and 333 deaths between them.

WHAT IS EBOLA AND HOW DEADLY IS IT?

Ebola, a haemorrhagic fever, killed at least 11,000 across the world after it decimated West Africa and spread rapidly over the space of two years.

That epidemic was officially declared over back in January 2016, when Liberia was announced to be Ebola-free by the WHO.

The country, rocked by back-to-back civil wars that ended in 2003, was hit the hardest by the fever, with 40 per cent of the deaths having occurred there.

Sierra Leone reported the highest number of Ebola cases, with nearly of all those infected having been residents of the nation.

WHERE DID IT BEGIN?

An analysis, published in the New England Journal of Medicine, found the outbreak began in Guinea – which neighbours Liberia and Sierra Leone.

A team of international researchers were able to trace the epidemic back to a two-year-old boy in Meliandou – about 400 miles (650km) from the capital, Conakry.

Emile Ouamouno, known more commonly as Patient Zero, may have contracted the deadly virus by playing with bats in a hollow tree, a study suggested.

HOW MANY PEOPLE WERE STRUCK DOWN?

Figures show nearly 29,000 people were infected from Ebola – meaning the virus killed around 40 per cent of those it struck.

Cases and deaths were also reported in Nigeria, Mali and the US – but on a much smaller scale, with 15 fatalities between the three nations.

Health officials in Guinea reported a mysterious bug in the south-eastern regions of the country before the WHO confirmed it was Ebola.

Ebola was first identified by scientists in 1976, but the most recent outbreak dwarfed all other ones recorded in history, figures show.

HOW DID HUMANS CONTRACT THE VIRUS?

Scientists believe Ebola is most often passed to humans by fruit bats, but antelope, porcupines, gorillas and chimpanzees could also be to blame.

It can be transmitted between humans through blood, secretions and other bodily fluids of people – and surfaces – that have been infected.

IS THERE A TREATMENT?

The WHO warns that there is ‘no proven treatment’ for Ebola – but dozens of drugs and jabs are being tested in case of a similarly devastating outbreak.

Hope exists though, after an experimental vaccine, called rVSV-ZEBOV, protected nearly 6,000 people. The results were published in The Lancet journal.