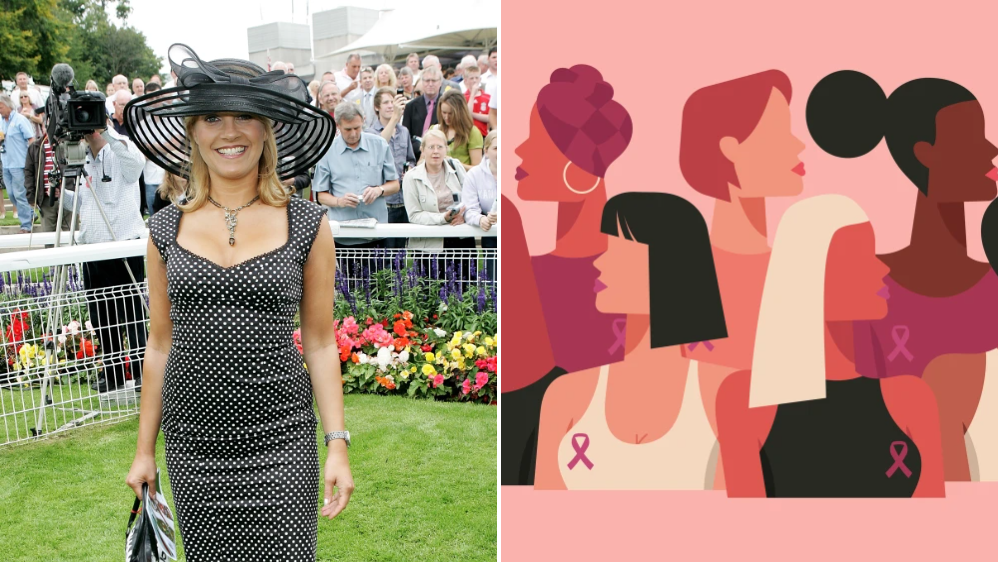 A million women missed their mammograms during the pandemic – among them was actress Malandra Burrows.

It was only when her dog Teddy nudged her breast and she realised it felt sore that the former Emmerdale star decided to see her doctor about it. From there, she was sent for a mammogram and received the shocking news that she had breast cancer.

Malandra’s sharing her story in support of MP Dawn Butler’s #FindTheMillion campaign launched with Metro.co.uk to encourage the million women who missed out on their mammograms due to the pandemic to go and have one.

In the last six months since being diagnosed, Malandra tells Metro.co.uk that she has attended endless appointments at three hospitals. Yet, she adds, she is adamant she will not let her situation get her down.

‘“Could be better, but smiling” is probably the best way to describe myself right now,’ she explains. ‘My social life consists of hospital visits. Sometimes I have to pinch myself and say, “Is this really me or is it a dream?”

‘I always had it in my head that because I ate healthily, took vitamins, didn’t smoke or drink much and had an active lifestyle, it would keep me cancer-free, so the diagnosis was a huge shock. I’m still getting over it.’

Malandra, 56, was diagnosed in February and had three surgeries to remove two stage-three tumours from her left breast. Since then she has had chemotherapy and radiotherapy but such is her determination to raise awareness of the disease and its symptoms, she is reluctant to dwell on the side effects of the treatments.

‘Although I didn’t lose my hair, I felt awful,’ she says. ‘The treatments left me with brain fog, fatigue and nausea but I don’t want to frighten anyone. Friends have told me they have a fear of the treatment. Well, yes, the treatment can be harsh, but it’s life-saving.

‘So I want to tell women to check themselves and that if they suspect something – it doesn’t even need to be a lump, it can just be something that looks or feels a bit different – to go straight to their GP. The earlier you get treated and diagnosed, the better.’

Malandra, who played Emmerdale’s Kathy Glover from 1985 to 2001, recalls how she had no idea anything was wrong until her border terrier Teddy began acting strangely.

‘We’d be watching movies and she began to give my left boob quite a bit of attention. Then one night she head-butted me,’ she recalls. ‘It was so sore that I checked it and felt a lump. I thought it was just a swollen gland but when it hadn’t gone after a couple of days, I phoned my GP.’

Malandra, who lives in Halifax, Yorkshire, hadn’t been able to have her last mammogram because of lockdown, and her doctor referred her to a breast clinic.

‘The consultant said, “It feels like a cyst but you haven’t had your mammogram, so go down the corridor and get that done.” During the mammogram, the room went quiet and they said they needed to do a couple of biopsies. Well, six biopsies later, I knew something wasn’t right,’ she recalls.

‘When I got home  I was alone, and the consultant rang and said they needed to see me as soon as possible and asked me to bring someone with me. I fell to the floor because  I knew in my head what that meant.’

At the hospital, doctors confirmed that while she did indeed have a cyst, they had discovered two tumours deep behind it. Malandra has been told that her cancer was hormonal and menopause-related and that she may need medication in the future to control her oestrogen levels. She’s now finished treatment and is due to have a full body scan.

‘I’m just praying it hasn’t spread and that all the cells have been obliterated but I won’t know that  for sure until the end of the year,’ she says. ‘I may always have cancer and I’ll always probably be prone to it, but let’s just hope the treatment has done its trick.’

The actress, who has been too ill to work since her diagnosis, has received messages of support from former Emmerdale colleagues, including Samantha Giles, who plays Bernice Blackstock, and Frazer Hines, who played Joe Sugden. During her recovery, Malandra has spent hours in her garden.

‘It’s my sanctuary – my way of creating a positive mindset. Ever since I was diagnosed, I’ve been positive and determined to fight this.’

After being diagnosed with breast cancer during a routine mammogram in November, Dawn Butler MP was grateful to find out it was caught early.

However, she learned that a million women missed out on their mammograms due to the pandemic, with an estimated 10,000 currently living with undetected breast cancer.

Determined to change that, Dawn has launched a campaign with Metro.co.uk to get a million women to book their missed screenings.

If you have been inspired to do so after hearing Dawn’s story, please let her know on her website, emailing us or using #FindTheMillion on social media.