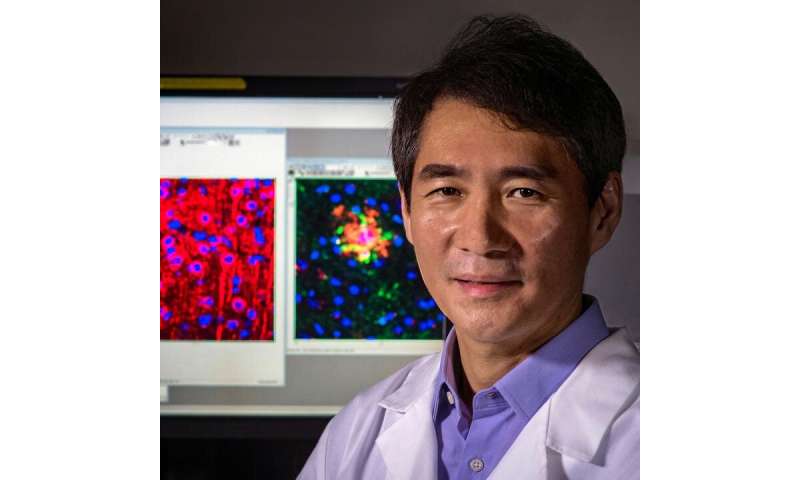 In a healthy brain, the multistep waste clearance process known as autophagy routinely removes and degrades damaged cell components—including malformed proteins like tau and toxic mitochondria. This cellular debris would otherwise pile up like uncollected trash to drive the death of brain cells (neurons), ultimately destroying cognitive abilities like thinking, remembering and reasoning in patients with Alzheimer’s and certain other neurodegenerative diseases.

The protein p62, a selective autophagy cargo receptor, plays a major role in clearing misfolded tau proteins and dysfunctional mitochondria, the energy powerhouse in all cells including neurons. Through autophagy (meaning “self-eating” in Greek) old or broken cellular material is ultimately digested and recycled in lysosomes, membrane-bound structures that work like mini-waste management plants.

Now, neuroscientists at the University of South Florida Health (USF Health) Byrd Alzheimer’s Center report for the first time that the protein phosphatase Slingshot-1, or SSH1 for short, disrupts p62’s ability to function as an efficient “garbage collector” and thereby impairs the disposal of both damaged tau and mitochondria leaking toxins. In a preclinical study, the researchers showed that SSH1’s influence in halting p62-mediated protective clearance of tau was separate from SSH1’s role in activating cofilin, an enzyme that plays an essential part in worsening tau pathology.

Their findings were published Oct. 12 in Autophagy.

“Slingshot-1 is an important player in regulating the levels of tau and neurotoxic mitochondria, so it’s important to understand exactly what’s going wrong when they accumulate in the brain,” said the paper’s senior author David Kang, Ph.D., professor of molecular medicine at the USF Health Morsani College of Medicine, who holds the Fleming Endowed Chair in Alzheimer’s Disease and serves as the director of basic research at the Byrd Alzheimer’s Center. “This study provides more insight into a defect stemming from the p62 pathway, which will help us develop SSH1 inhibitors (drugs) to stop or slow Alzheimer’s disease and related neurodegenerative disorders.”

At the start of their study, Dr. Kang’s team, including first author and doctoral student Cenxiao (Catherine) Fang, MD, already knew that, in the case of clearing bad mitochondria (known as mitophagy), the enzyme TBK1 transiently adds phosphate to p62. Phosphate is specifically added at the site of amino acid 403 (SER403), which activates p62. However, no scientist had yet discovered what enzyme removes phosphate from p62, known as dephosphorylation.

Tightly controlled phosphorylation is needed to strike a balance in p62 activation, an early step key in priming the cargo receptor’s ability to recognize and collect chunks of cellular waste labelled as “garbage” by a ubiquitin tag. Put simply, when autophagy works well, ubiquitinated tau and ubiquitinated mitochondria are selectively targeted for collection and then delivered for destruction and recycling by autophagosomes (the garbage trucks in this dynamic process). But, garbage collector p62 doesn’t touch the cell’s healthy (untagged) proteins and organelles.

“When something shifts out of balance, like overactivation of Slingshot-1 by Alzheimer’s-related protein Aβ for example, then SSH1 starts to remove the phosphate off the garbage collector p62, essentially relaying the message ‘stop, don’t do your job.’ That leads to bad consequences like accumulation of damaged tau proteins and toxic mitochondria,” Dr. Kang said.

“If we can bring phosphorylation regulation back into balance through inhibitors that dampen overactive Slingshot-1, we can increase p62’s normal activity in removing the toxic garbage.”

This latest study builds upon previous USF Health research showing that Aβ-activated cofilin, which occurs through SSH1, essentially kicks tau from the microtubules providing structural support to neurons, thereby boosting the build-up of tau tangles inside dying nerve cells. In the displacement process, cofilin gets transported to mitochondria and damage to the energy-producing mitochondria ensues. Following up on that collateral cofilin-triggered damage, Dr. Kang’s team expected to find widespread mitophagy to remove the sick mitochondria.

“We got exactly the opposite result, which meant there was another mechanism affecting how Slingshot-1 regulated mitochondria,” Dr. Kang said, “and it turned out to encompass the key autophagy machinery of p62.”

The researchers also showed that two major and entirely separate signaling pathways implicated in tau pathology—one for p62 and another for cofilin—are regulated by the same enzyme, SSH1.