The final day of term two in year 8 was the last time Alex Dalton would wear the girls’ maroon tartan kilt at MacKillop College or be referred to as “she”. After the winter holidays, Alex – who had come out as transgender the previous year – returned to class with a new name and wearing the boys’ uniform.

MacKillop College, a co-ed Catholic secondary school in Melbourne’s outer-western suburbs, had suggested doing it this way to make the transition as seamless as possible. 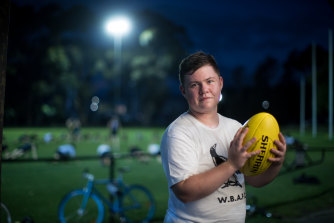 “The school said, ‘Wait until the semester break and then you’ll come back and we’ll have changed everything in the system and you’ll have a fresh start.’ I’d been in the same class for two years and all of them knew by that point, so everything just sort of went without a hitch,” Alex said.

Alex had experienced depression, suicidal thoughts and self-harm from the age of 11. He said being able to socially transition – adopt the name, pronouns and uniform that matched his gender identity – with the support of his parents and school marked a turning point in his mental health.

“It still wasn’t perfect – it isn’t now – but it was definitely a lot better than what it had been,” Alex said. “There was a visible change in the level of happiness that I was experiencing. I just got to feel a hell of a lot more comfortable at school and at home and in my life. My family comments on how much they have noticed that change and how glad they are for it.”

Alex, now 19 and studying arts at university, is one of the young people featured in the latest episode of Enough, a podcast about youth mental health by The Age and The Sydney Morning Herald.

Research consistently shows that a disproportionate number of LGBTQI youths experience poorer mental health and have a higher risk of suicide than their peers – often a consequence of stigma, discrimination and violence.

A Resolve poll on youth mental health, commissioned by The Age and The Sydney Morning Herald, found 93 per cent of LGBTQI youths experienced mental health issues during the pandemic – a higher percentage than any other cohort.

After several years of therapy, Alex came out to his parents halfway through year 7. Initially, they told him to wait until he turned 18 before he began identifying as a male or having hormone therapy. “I was like: ‘Well, I’m not going to make it to 18,’ ” Alex said.

“That was probably the worst stint of suicidal ideation that I had. I didn’t see any way out and I couldn’t play the waiting game for that long.”

Alex’s father, Graeme Dalton, said he and his wife agreed to let Alex begin transitioning after being reassured by a specialist from the Royal Children’s Hospital Gender Service that Alex would not change his mind.

“There’s no book on parenting and how things are going to end up and what you should and shouldn’t do. Once we got into the Children’s Hospital and there was a bit more of a program to work to, that made it better and it was easier to deal with. They slowed things up a little bit too.”

Alex started testosterone therapy at the beginning of year 10 and top surgery, where breast tissue is removed, in year 12. “Starting hormone therapy was another set of leaps and bounds in terms of my mental health improving – it was something I had waited for for a long time.”

He met regularly with teachers to discuss potentially fraught issues such as which tent he would sleep in on camps (his own rather than a communal tent) and which toilets he would use (gender-neutral toilets are dotted around the campus).

Alex was especially grateful to the school’s wellbeing co-ordinator, Andrew Exton. “He tended to ask questions – quite bluntly at times – but it was genuinely for the betterment of his understanding. It was something that I really appreciated, him taking the time to try and learn and understand and be able to use that to help other people.”

“We are not Catholic and he was going to a Catholic school and we weren’t sure at all how this would be accepted,” said Mr Dalton.

“The school suggested to us that Alex would be much happier if he wore pants and he was, they were right. I thought they handled things very well. I still can’t believe he didn’t get picked on or anything by other students. He seemed to be accepted by everyone there.”

MacKillop College principal Rory Kennedy said the wellbeing of each student was paramount, regardless of their appearance, sexuality, ability or religious or cultural background.

“As a Catholic school, we believe that every person is made in the image of God and strive to create environments that reflect the innate, God-given dignity and uniqueness of every student, so that they feel welcomed and respected,” he said.

“We also support our pastoral care with clear messages and actions that make it explicit we do not tolerate discrimination, harassment and bullying. I am very pleased that Alex has felt supported by the college and our pastoral care, and that we have played a role in setting him up for his journey through life.”

Now he has left school, Alex says he has come to terms with the fact there will always be people in the wider community who hate him because he exists. “But there are things that defy that narrative, MacKillop obviously being one of them.”