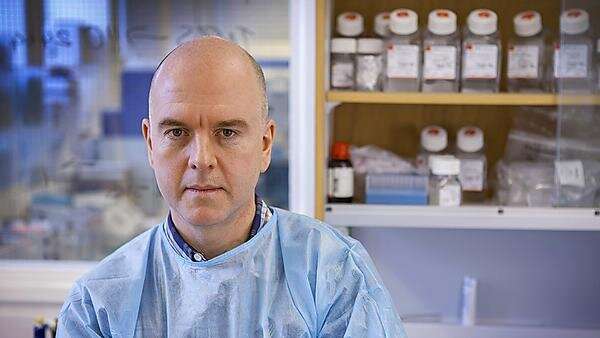 An experimental antiviral drug can significantly decrease levels of the virus causing COVID-19 and the damage it causes in the lungs, according to new research.

Scientists from the United States National Institutes of Health (NIH) and the University of Plymouth found that MK-4482—initially developed to treat influenza—was effective when provided up to 12 hours before or 12 hours after infection with SARS-CoV-2.

Writing in Nature Communications, the researchers say it suggests treatment with MK-4482 could potentially mitigate high-risk exposure to SARS-CoV-2 and might be used to treat established SARS-CoV-2 infection alone or in combination with other agents.

The drug is currently undergoing human clinical trials, but researchers say its ability to be provided orally could offer a significant advance on existing antivirals being used to treat COVID-19.

Remdesivir, for example, has already been approved by the United States Food and Drug Administration but must be provided intravenously, making its use primarily limited to clinical settings at later stages of disease.

The research was conducted at Rocky Mountain Laboratories, part of NIH’s National Institute of Allergy and Infectious Diseases in Hamilton, Montana.

Dr. Michael Jarvis, Associate Professor of Virology and Immunology at the University of Plymouth and a guest researcher at NIH, was a senior author on the study.

He has expertise in developing vaccines designed to prevent infections jumping from animals to humans, and has also been working to adapt novel vaccine platform technology to prevent future human coronavirus zoonotic emergence.

“In contrast to vaccines against SARS-CoV-2, we really don’t have many drugs that are effective against the virus. This is an exciting result that identifies MK-4482 as an additional antiviral against SARS-CoV-2. The drug, also called Molnupiravir, is in the final stages of human clinical trials in SARS-CoV-2 infected patients.

“If the final human data show a similar antiviral effect, our preclinical animal data suggests it may be suitable for use as an orally administered pill following exposure to the virus, similar to the way we use Tamiflu for influenza. I think this additional control measure could prove to be really useful in the current pandemic.”