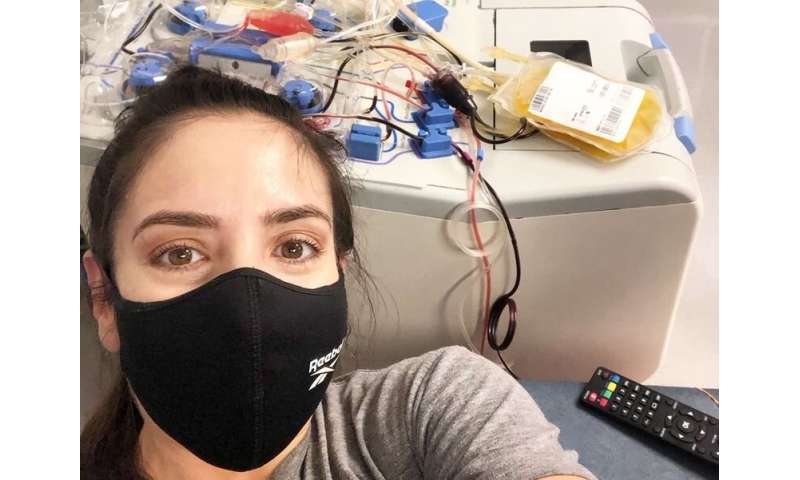 (HealthDay)—If you’ve recovered from a COVID-19 infection, you can help as many as four other COVID-19 patients get better, simply by donating your plasma.

Is it worth it? Just ask Melissa Sullivan.

The 35-year-old COVID-19 survivor and self-confessed needle-phobe donated her plasma soon after she recovered, and she plans on doing it again two weeks from now.

“I was very scared when I was sick, but I came out on the other side, so why not pay it forward? If I had needed it, I would have wanted someone to have the courage to do it. You can make an immeasurable difference in someone’s life,” Sullivan said.

COVID-19 infection blindsided Sullivan, who has consistently taken precautions to avoid the disease. She’s an active, healthy marathon runner who works as a press officer for the U.S. Environmental Protection Agency. Normally, she exercises about five to six times a week, and was on track to complete her third Marine Corps Marathon this year.

But one day in August, Sullivan said, “I went on a 6-mile run, which was pretty routine for me. After the run, my symptoms came on hard and fast. I had shortness of breath, chills and fever. Later, I developed a pounding headache, nausea, vertigo and stomach flu symptoms.”

The day after her symptoms began, she was in the hospital, where they monitored her oxygen levels and gave her IV fluids.

“It was not as bad as it could have been, but it was probably some of the worst pain I’ve experienced in my life. I think my age and the fact that I’m healthy helped me get better quickly,” Sullivan said.

Because she recovered relatively soon after her illness, Sullivan said, “I felt I had a duty to give back to others.”

Plasma is a component of blood that carries antibodies. These infection-fighting proteins are made by the immune system in response to a specific infection. Experts hope that giving plasma with COVID-19 antibodies (called convalescent plasma) will boost the immune system of people currently fighting COVID-19 infections and help them recover.

“It’s a little different than whole blood donation. We use an apheresis machine to separate the plasma from the rest of the blood. This requires two needles. Once the plasma is separated, you get back the rest of your blood with some saline. It takes two to two and a half hours, and you can possibly save multiple lives,” she explained.

Sullivan confirmed that the process was relatively easy. “I never thought I could donate blood or plasma because I have a huge fear of needles. But then I thought, I have these antibodies and they can help other people in a significant way, so I can get over it for a few hours.”

She said the Red Cross staff really helped her through the whole donation process.

“I’m sure they must deal with this a lot, but they understood my concerns and talked me through the process. They made me feel appreciated, and it wasn’t as bad as I thought it would be. When it was over, I said, ‘That’s it?'” Sullivan noted.

Goodhue said anyone who’s had an official diagnosis of a COVID-19 infection or has antibodies to the infection can donate plasma.

“If you’ve battled and recovered from COVID, we’d like you to donate,” she said.

People have to be free of COVID-19 symptoms for 14 days, including coughing or any type of breathing problem, before they can donate.

Once someone has donated, they can do it more than once. In fact, Goodhue said they can donate once every seven days (no more than eight times) in a three-month period.

The American Red Cross is also offering COVID-19 antibody testing to all blood donors. If someone tests positive for COVID-19 antibodies, the plasma from that donation could be used as a convalescent plasma donation.

Sullivan said she would suggest any COVID-19 survivor to consider donating. “It’s a couple of hours from your day and a few minutes of discomfort, but look at the potential impact.”

Her own story has a happy ending. She was able to complete the Marine Corps Marathon in Washington, D.C. on Oct. 25.