New cases of the flu in the United States continue to decline as flu-related outpatient visits to doctors’ offices and hospitals fell for the fifth straight week as 2022 ended, according to the latest CDC data.

While good news, the number of hospital admissions for flu and flu-like illnesses held steady. 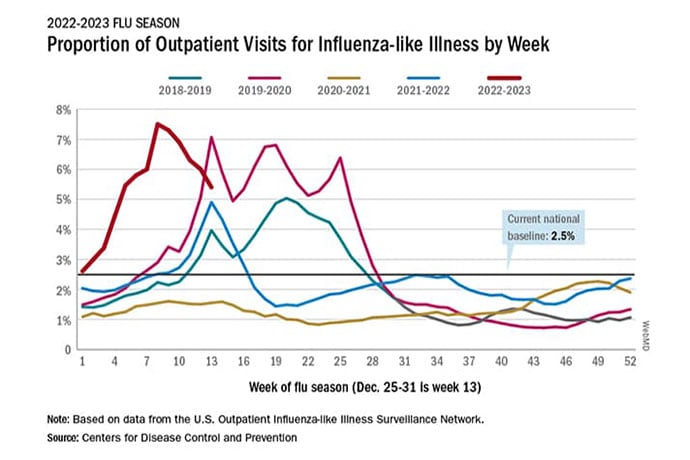 Outpatient visits for flu-like illness made up 5.4% of all visits to health care providers during the week of Dec. 25-31, according to data from the CDC’s Outpatient Influenza-like Illness Surveillance Network. That is down from 6.0% the previous week and down from what seems like a seasonal peak of 7.5% in late November, based on the CDC Influenza Division’s latest FluView report.

The CDC’s surveillance network defines influenza-like illness as fever plus cough or sore throat, not laboratory-confirmed flu, so the data includes other respiratory illnesses such as COVID-19 and respiratory syncytial virus (RSV). But the language in the FluView report makes it clear that the CDC puts the emphasis on the flu.

State-level data confirms the national drop: Only 12 jurisdictions were at “very high” flu activity for the week of Dec. 25-31, compared with 24 the week before. (Jurisdictions include the 50 states, as well as territories, New York City, and the District of Columbia.) Another step down shows that the number of metro areas with very high activity fell from 59 to 37, the CDC said.

Despite the declines in outpatient visits, hospital admissions remained right around 19,000 for a second straight week after a 2-week downturn, based on data from the U.S. Department of Health and Human Services Protect platform. Another measure not showing improvement was the proportion of deaths due to the flu, which was higher for Dec. 25-31 (1.63%) than either of the 2 previous weeks (1.53% and 1.6%), according to data from the National Center for Health Statistics that were included in the CDC report.

Total deaths during the 2022-23 flu season number around 14,000 so far, with hospitalizations at 230,000 and illnesses around 22 million. Among the deaths reported during the latest week were 13 in children, and the total number for the season is now at 74, the CDC said.