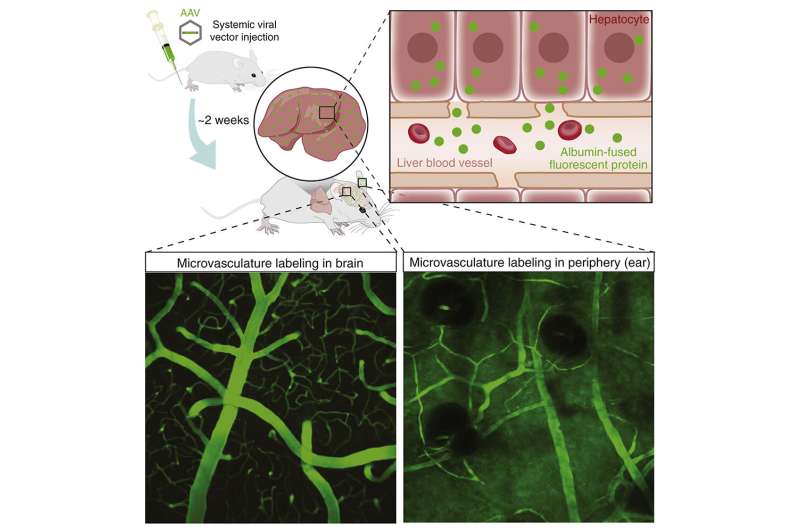 Did you ever think of jellyfish or a salamander as fluorescent?

That is actually the case. Both animals have proteins in their bodies that enables them to light up.

Researchers from the University of Copenhagen now invented a way to use these fluorescent proteins to gain new knowledge about brain diseases like depression, Alzheimer’s, and strokes. Their study is published in Cell Reports Methods.

“We developed a new method to visualize the blood flow in the brain in experimental mice for months,” says professor at the Center for Translational Neuromedicine at the University of Copenhagen, Hajime Hirase. He is one of the researchers behind the new method.

Before the newly developed method, the researchers used chemical dyes instead. That dye only made it possible to observe the blood flow in the brain for a few hours at a time.

“There is already evidence, that blood flow is affected in several different diseases. So, it is a tool that can be used in many of those, especially long term progression of diseases.”

Because the new method induces the mice to produce harmless fluorescent proteins to label the blood, rather than chemical dyes, the mice only need to have an injection once instead of multiple times and every few hours. That reduces stress and pain for the mice.

“The mouse tail has very thick blood vessels where we normally inject dyes in. Then, if we look in a microscope, we can see nicely labeled blood, but this only lasts for one or two hours. Our new method labels the blood for months,” Hajime Hirase says.

“It addresses two of the three R’s. It’s both Refinement, because we are reducing stress for the animals, but it is also Reduction, because we can do longer studies in the same animal repeatedly, so reducing the number of animals as well,” explains Antonis Asiminas.

The researchers use mice, because they have similar biology to humans and there are many valuable mouse models for human diseases, in which the researchers can use their new method.

“Half of the blood is blood cells and the rest is fluid called plasma. My graduate students Xiaowen Wang and Christine Delle calculated that if we label a few percent of albumin, we should be able to see green fluorescent blood by microscopy,” says Hajime Hirase and Antonis Asiminas adds:

“We pack the modified genes that have the information for albumin and the fluorescent protein into a virus that we inject to the animal. The virus goes into the liver and tricks the liver to produce the modified protein which at the end makes the blood fluorescent.”

By using a process that occurs naturally in the body, they can trick the mice’s livers into making the blood fluorescent. That makes it possible to study the blood flow in the brain.

“It is a way for us to really study disease in a way that we could not do before. The goal and aim are that it will give us a new insight to disease progression and development in e.g. stroke that can hopefully lead to better understanding and possible treatment,” Antonis Asiminas explains.