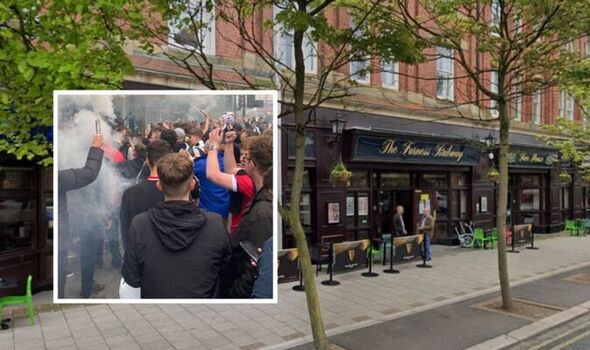 Scores of football fans have reported becoming ill with a sickness bug after visiting a Wetherspoons.

Grimsby Town FC fans had made the away trip to watch their side take on Barrow in the National League on October 25.

After choosing to dine at The Furness Railway pub on Abbey Road in Barrow-in-Furness, Lancashire, many Mariners reported being unwell the following day with a sickness bug believed to be norovirus.

A sign subsequently appeared on the door of the pub which read: “Due to unforeseen circumstances, the pub will be closed until further notice”, reports Grimsby Live.

Jack Holmes had travelled to Barrow-in-Furness on Tuesday, October 25 to watch the Mariners game and stayed in the hotel above the restaurant, where he ate at on two separate occasions.

Within two days, each member of the party was ill.

He said: “We used the hotel facilities at the Wetherspoons so we got there, checked in and went down for some food and made our way to the game.

“The next morning we all had breakfast there and nothing really happened until about 10pm on Wednesday night when the first person got ill.

“We didn’t know what it was at that point.”

Jack said that by Thursday morning, all five members of the group were ill and they began to “put the pieces together”.

He continued: “I was really ill but there were people worse than me from what they were saying, but I was up all night being sick and so on.

“It was grim. All of us were annoyed at the Wetherspoons, that was the general feeling.”

He said it took him a “good two or three days” to feel “back to normal”.

Wetherspoons spokesman Eddie Gershorn confirmed the pub, and its attached hotel, were closed down due to an outbreak of sickness among staff.

He said: “There has been an outbreak of sickness among some staff at the pub. As a result we took it upon ourselves to close and are undergoing a professional deep clean.

“At the moment there is no day or time when it will reopen. The pub has an excellent track record, is popular and well-maintained.

“Unfortunately some staff have reported sick and we will not reopen until we have enough staff to run the pub and completed the clean.”