The vaccine, developed by Chinese biopharmaceutical firm Cansino Biologics, is being dished out as a booster dose for free in Shanghai.

Convidecia Air, as the vaccine is dubbed, is taken as a mist that’s sucked in through the mouth.

Officials in the country hope it will increase uptake among the needle-shy, allowing draconian Covid restrictions still in place to be lifted.

It was approved in China last month — but has not yet got past medical regulators elsewhere, including in the UK or US. 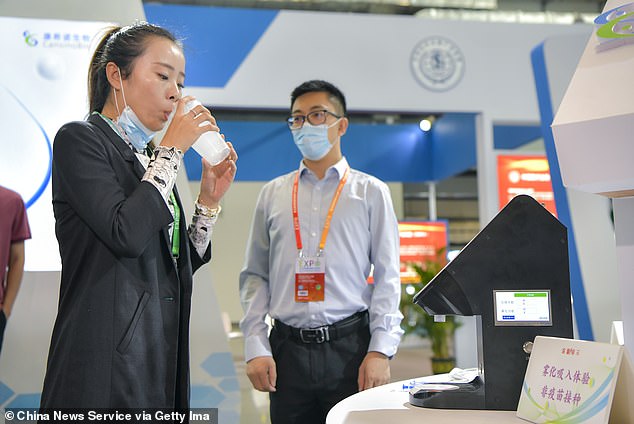 An inhalable Covid vaccine developed by Chinese biopharmaceutical company Cansino Biologics Inc is being dished out for free to people who have already had a jab in Shanghai. Pictured: A visitor demonstrates how the vaccine would work during the 5th Hainan International Health Industry Expo at Hainan International Convention and Exhibition Center 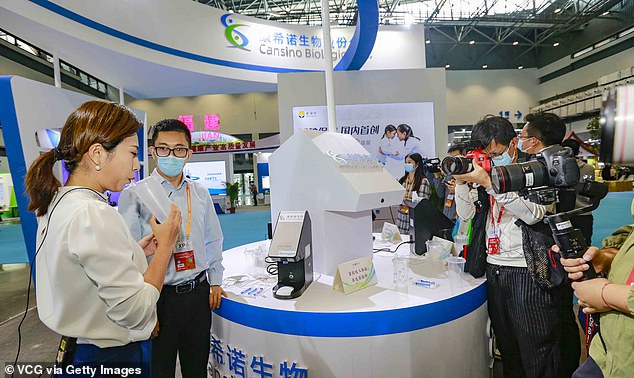 Convidecia Air, as the vaccine is dubbed, is taken as a mist that is sucked in through the mouth 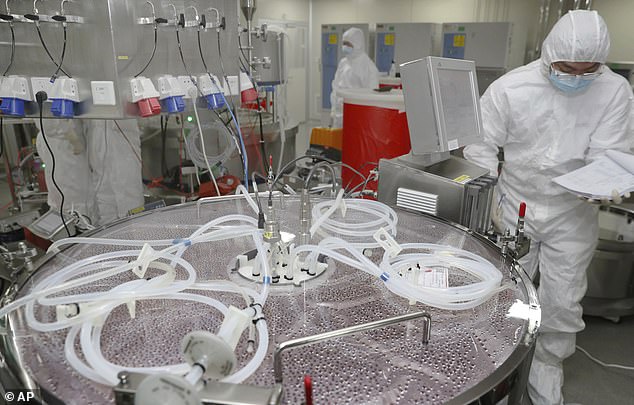 Scientists have been chasing a nasal spray Covid vaccine as an alternative to the needle-based method.

They hope that it could ‘enhance’ immune responses because it is administered to the lining of the nose, the first place the virus infects.

Experts also say it can help people with a fear of jabs get the vaccine.

The fear — known as trypanophobia — affects about 10 per cent of adults.

There is still little evidence that they are as good as standard jabs, however.

Oxford University found they only sparked immunity in a minority of participants.

The sprays have been approved for use in China and India. But studies on this are yet to be released.

The World Health Organization (WHO) gave the company’s regular jab, Convidecia, emergency use listing in May.

That is already cleared in Hungary, Pakistan, Malaysia, Argentina and Mexico, where the inhalable vaccine is also being trialled.

Scientists believe inhalable vaccines might ‘enhance’ protection because they target the lining of the nose, where the virus infects first.

Experts hope they will also help expand inoculation in poor countries because they are easier to administer and transport.

The vaccine has the potential to consign physical Covid jabs to history.

Scientists across the world are also working on nasal sprays, like the one given to children to protect against the flu.

A clip posted by Chinese state media showed people at a community health centre putting the short nozzle of a translucent white cup in their mouths.

Accompanying text said that, after slowly inhaling, one individual held his breath for five seconds, with the entire procedure completed in 20 seconds.

‘It was like drinking a cup of milk tea,’ one Shanghai resident said in the video. ‘When I breathed it in, it tasted a bit sweet.’

Dr Vineeta Bal, an immunologist in India, said oral vaccines could fend off the virus before it reaches the rest of the respiratory system.

Larger droplets would train defences in parts of the mouth and throat, while smaller ones would travel further into the body, she said.

Convidecia Air was developed as an aerosol version of the same company’s one-shot adenovirus vaccine, which piggybacks a relatively harmless cold virus.

Meanwhile, regulators in India have approved a nasal vaccine, another needle-free approach, but it has yet to be rolled out.

The vaccine, developed in the US and licensed to Indian vaccine-maker Bharat Biotech, is squirted in the nose.

About a dozen nasal vaccines are being tested globally, according to the World Health Organization.

A study earlier this month revealed AstraZeneca’s leading Covid nasal spray vaccine does not protect well against the virus.

The University of Oxford — which is developing and running trials of the vaccine — said only a minority of patients mounted an immune response.

Even those who did react to the jab had lower antibody levels than someone given a shot-in-the-arm vaccination.

Dr Sandy Douglas, who ran the UK-based AstraZeneca trial, said the spray did not perform ‘as well as we had hoped’.

Nasal vaccines for the flu called Fluenz Tetra are already dished out by the NHS in the UK.

It is offered to children every year to help protect them against the virus.

Trypanophobia is an extreme fear of needles.

While many people don’t look forward to medical tests or treatments involving syringes or injections, trypanophobia suffers have such an extreme fear it can lead to them avoiding medical procedures entirely.

It can lead to people refusing to get vaccines, or having a panic attack, or even fainting, at the prospect of a blood test.

How many people in the UK suffer from trypanophobia?

The true number of people with the phobia is unknown but charity Anxiety UK estimates that between 3.5 to 10 per cent of the population has some form of trypanophobia.

What causes the fear?

Childhood experiences with vaccines, or seeing a partner, parent or grandparent go through medical tests are thought to be behind the phobia.

What can I do if I’m scared of needles?

Firstly, you should let healthcare professionals know as there are a variety of things they can do to help you feel more comfortable.

There are also a number of techniques such as breathing exercises and cognitive behavioural therapy that can help people deal with their phobia.