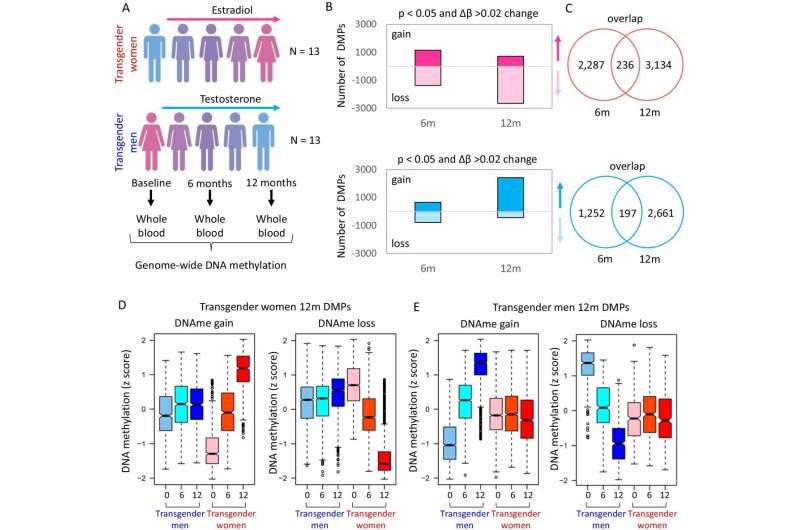 Gender-affirming hormone therapy could influence the way a person’s genes are turned on or off, according to a new study.

The research, led by the Murdoch Children’s Research Institute (MCRI) and published in Clinical Epigenetics, found the hormone therapy could affect certain regions of DNA, the first step in understanding how this therapy may impact the immune system.

The researchers have begun to tease apart whether the hormone therapy influences immune function and susceptibility to autoimmune disease or infection risk, which affects sexes differently. The findings have implications for counseling transgender children and adolescents about the effects of hormone therapies.

“When providing education and counseling to transgender young people, questions about how gender-affirming hormones will affect their immune system can arise,” he said.

“For example, a young person with a strong family history of autoimmune disease may wish to know if hormonal therapy will increase or decrease their risk of developing disease. Others may worry about hormones altering their susceptibility to infections, which is relevant given the current COVID-19 pandemic. At this stage, we don’t know the answers to such questions, and this research is an important first step.”

Study lead author and MCRI researcher Rebecca Shepherd said this was the first study to show the impact of gender-affirming hormone therapy on the epigenetic signature of genes involved in immunity and responses to infections. The process of how the environment affects gene activation or deactivation is known as epigenetics.

“We found that hormone therapy affects regions of DNA that are more susceptible to epigenetic change during periods of hormonal fluctuation, such as adolescence and pregnancy, but not regions on the X chromosome,” Ms Shepherd said. This means that there are some hard-wired sex-specific epigenetic marks that do not change in response to hormone therapy, while others are more hormone-sensitive and are progressively altered in the first year of hormone therapy.”

“Interestingly, where we observed epigenetic changes in regions of DNA that were distinct between sexes before hormone therapy, these regions consistently shifted towards the profile of the affirmed gender after 12 months of hormone therapy.

“Understanding how gender-affirming hormone therapy changes the epigenetic landscape of DNA is a first step in piecing together how these hormones affect immune function.”

Study co-senior author MCRI Dr. Boris Novakovic said despite gender affirming hormone therapy being a cornerstone of transgender healthcare, it was not known whether the therapy influenced immune function and susceptibility to autoimmune disease or infection risk.

“Women are generally more susceptible to developing autoimmune diseases like lupus, multiple sclerosis and rheumatoid arthritis,” he said. “The reason for these differences between sexes is a combination of genetics and hormones, both of which influence immune function.

“However, it is difficult to separate the two, because they generally go hand in hand, XY chromosome with testosterone and XX chromosome with estrogen. But gender-affirming hormone therapy allows us to look specifically at the influence of hormones on genes.”

Dr. Novakovic said about 0.3–0.5 percent of the population was transgender, of which many would seek gender-affirming hormone therapy.

“In the era of personalized medicine, inclusivity of all genders and sexes in research is vital so we can provide equitable and inclusive healthcare,” he said. “It is important we broaden our current understanding of immunity to include transgender people.”

Across the globe, increased awareness and understanding of gender diversity have contributed to a considerable rise in the number of transgender children and adolescents seeking specialist care.

Mac Zamani, 18, who has an autoimmune thyroid disease, said it was reassuring that research was being done into how gender-affirming hormones affected the immune system.

Five years ago Mac was referred to the First Assessment Single Session Triage (FASST) clinic at The Royal Children’s Hospital Gender Service (RCHGS). The FASST clinic was established to provide information and support quicker to transgender young people, aged 8 to 17 years, and their families.

“I have been worried and curious to how testosterone might affect my autoimmune condition especially as it predominantly occurs in women,” he said.

“It was an important aspect of discussion around starting testosterone as we were worried it could cause a flair up but also curious if it would decrease symptoms. It’s reassuring to know that research has started to unpack these unique situations and have a more concrete understanding on trans healthcare.”