Girl, two, has brittle bone disease that makes her limbs so delicate she was BORN with a broken arm

A two-year-old girl has broken more than 50 bones due to a rare condition that saw her born with a fractured arm.

Winnie D’Arcy, of Chelmsford in Essex, was diagnosed with osteogenesis imperfecta (OI), or brittle bone disease, at three months old.

The toddler also has the blood disorder Von Willebrand disease (VWD), which causes her blood not to clot properly and can result in heavy bleeding.

All this has caused serious developmental challenges, with Winnie being unable to walk, sit or feed herself.

Although OI is incurable, she is set to start a series of operations next month that will hopefully strengthen her bones and finally enable her to walk. 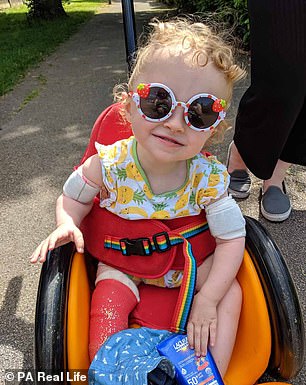 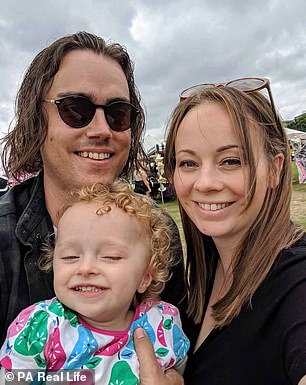 Winnie D’Arcy (left) has broken more than 50 bones due to the rare condition oseteogenesis imperfecta. Her parents (pictured right together) ‘feel guilty’ that they may have accidentally caused fractures while picking her up as a baby before she was diagnosed at three months

‘It’s hard to look back at early baby pictures,’ he said.

‘You want to look back with fond memories, but we just feel guilty, because we may have done normal things like picking her up under the arms, which could have caused some of her fractures.’

Doctors have reportedly told the parents Winnie’s condition is incurable but should improve by the time she reaches puberty. In the meantime, the slightest movement can cause her bones to break.

‘With some children it can be so bad just a sneeze can cause a break,’ said Mr D’Arcy, who worked with acts like Tom Grennan and The Libertines before they became famous.

Winnie has to sleep in her parents’ room in a cot padded by foam. The couple then take it in turns to sit and monitor her in one-hour shifts.

Mr D’Arcy even quit his job as a music industry booking agent to become his daughter’s full-time carer. His wife still works as a personal assistant.

The father-of-one has also learnt a ‘simplified form of sign language’ called Makaton, so he and his daughter can communicate with each other.

‘It’s less formal than British Sign Language,’ he said. ‘You speak as you sign and it’s been great for helping to build Winnie’s confidence to speak out loud.’

Winnie’s parents have also bought her a cockerpoo puppy, called Babs, which they will train as a therapy dog.

‘We will be able to train the dog to tell us if Winnie is in pain or has broken anything,’ Mr D’Arcy said.

Despite all they have endured, the pair manage to stay positive and have not let Winnie’s condition put them off expanding their family.

‘OI can be inherited but in Winnie’s case it wasn’t, so the doctors have told us it’s very unlikely we would have any more children with the condition,’ Mr D’Arcy said. 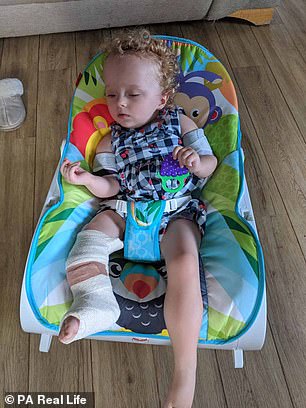 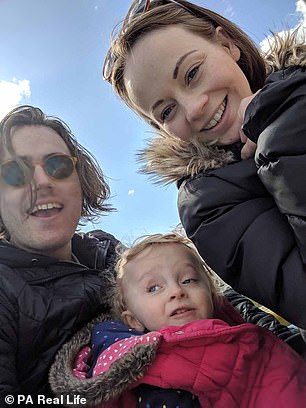 Pictured left during a daytime nap, Winnie has to sleep in her parents’ room in a cot padded by foam. The couple (right) then take it in turns to sit and monitor her in one-hour shifts 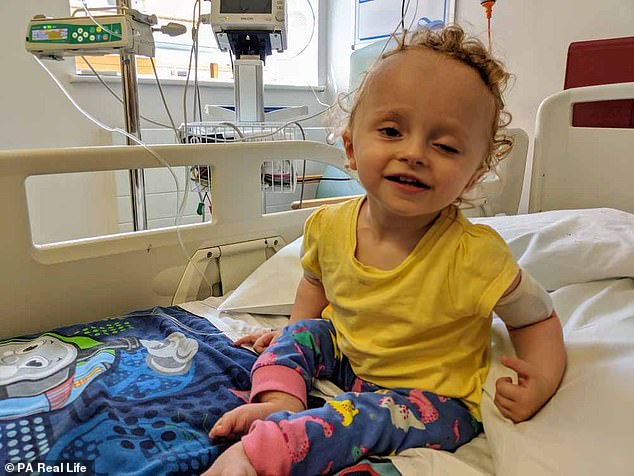 The toddler (pictured in hospital) also suffers from the blood disorder Von Willebrand disease (VWD), which causes her blood not to clot properly and can result in heavy bleeding 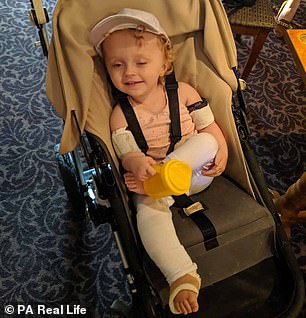 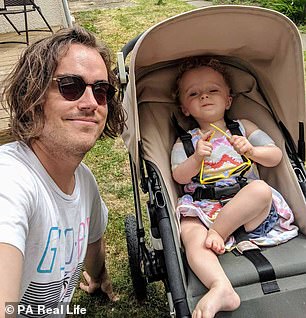 Still reliant on a pushchair (seen left), her parents hope a series of operations next month will finally enable Winnie to walk. Mr D’Arcy (pictured right with Winnie) quit his job as a music industry booking agent to become his daughter’s full-time carer

WHAT IS OSTEOGENESIS IMPERFECTA?

Osteogenesis imperfecta (OI) is a genetic condition that causes a sufferer to break bones with ‘minimal impact’.

It is caused by missing, reduced or low quality collagen.

Collagen is a protein that is responsible for bone structure.

Defects cause bones to be weak and fracture easily.

OI is present at birth and can be mild or severe. It is thought to strike around one in 15,000 people.

Most OI patients are treated via physiotherapy and symptom management.

The parents are anticipating their daughter starting a series of procedures at Great Ormond Street Hospital in London next month.

‘Winnie’s legs have broken so many times they are quite bowed,’ Mr D’Arcy said.

‘The initial surgery will be to break them, so a rod can be inserted to help the bones grow straight. We don’t know if she will ever walk but the rods will help strengthen her legs.

‘They don’t normally do this surgery until a child is three, but Winnie has had so many breaks they are doing it a year early.’

Winnie’s surgery is complicated by her VWD. To prevent her losing too much blood, the doctors will only operate on the lower part of both legs.

If everything goes to plan, the surgeons will then operate on both of her legs in separate surgeries.

All these procedures will leave Winnie in a cast from the waist down for three weeks.

The family, who will shortly be moving into a first-floor flat, will require special equipment to move her safely around their home.

Mr D’Arcy has started a GoFundMe page to help the couple cover this expense, as well as the cost of a hotel room during Winnie’s expected five day hospital stay.

‘I am also taking part in the 10k Queen Elizabeth Olympic Park Run in London in January 2020, to raise funds which we will need ongoingly.’

‘This takes a lot of the stress away,’ Mr D’Arcy said. ‘It means we can now concentrate on Winnie and trying to get her well.

‘We both feel eternally grateful for people’s generosity.’ 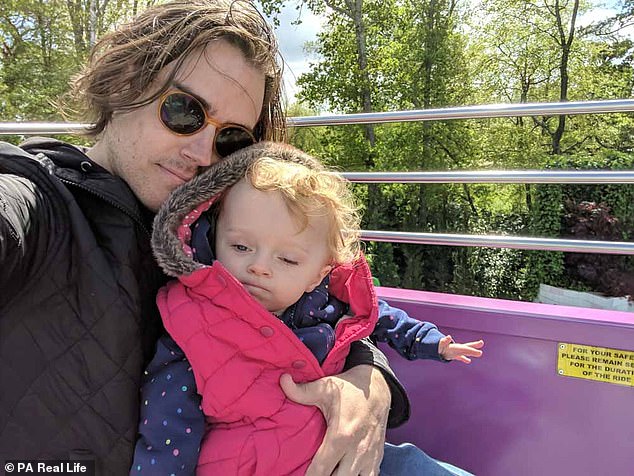 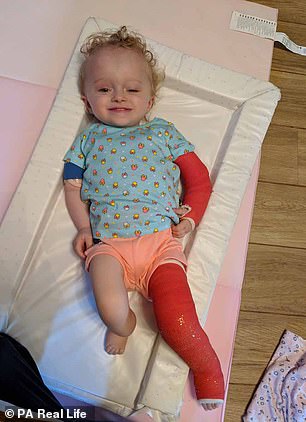 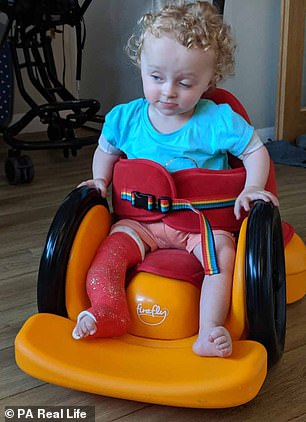 Winnie’s first surgery will involve placing rods in her legs to straighten them. If everything goes to plan, the surgeons will then operate on both of her legs in separate operations 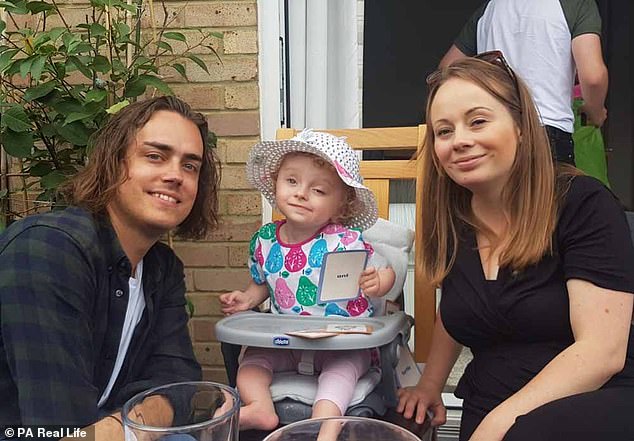