In a recent study posted to the Research Square* preprint server, researchers assessed whether disturbances in the gut microbiota weaken the serological response to the coronavirus disease 2019 (COVID-19) vaccine in inflammatory bowel disease (IBD) patients. 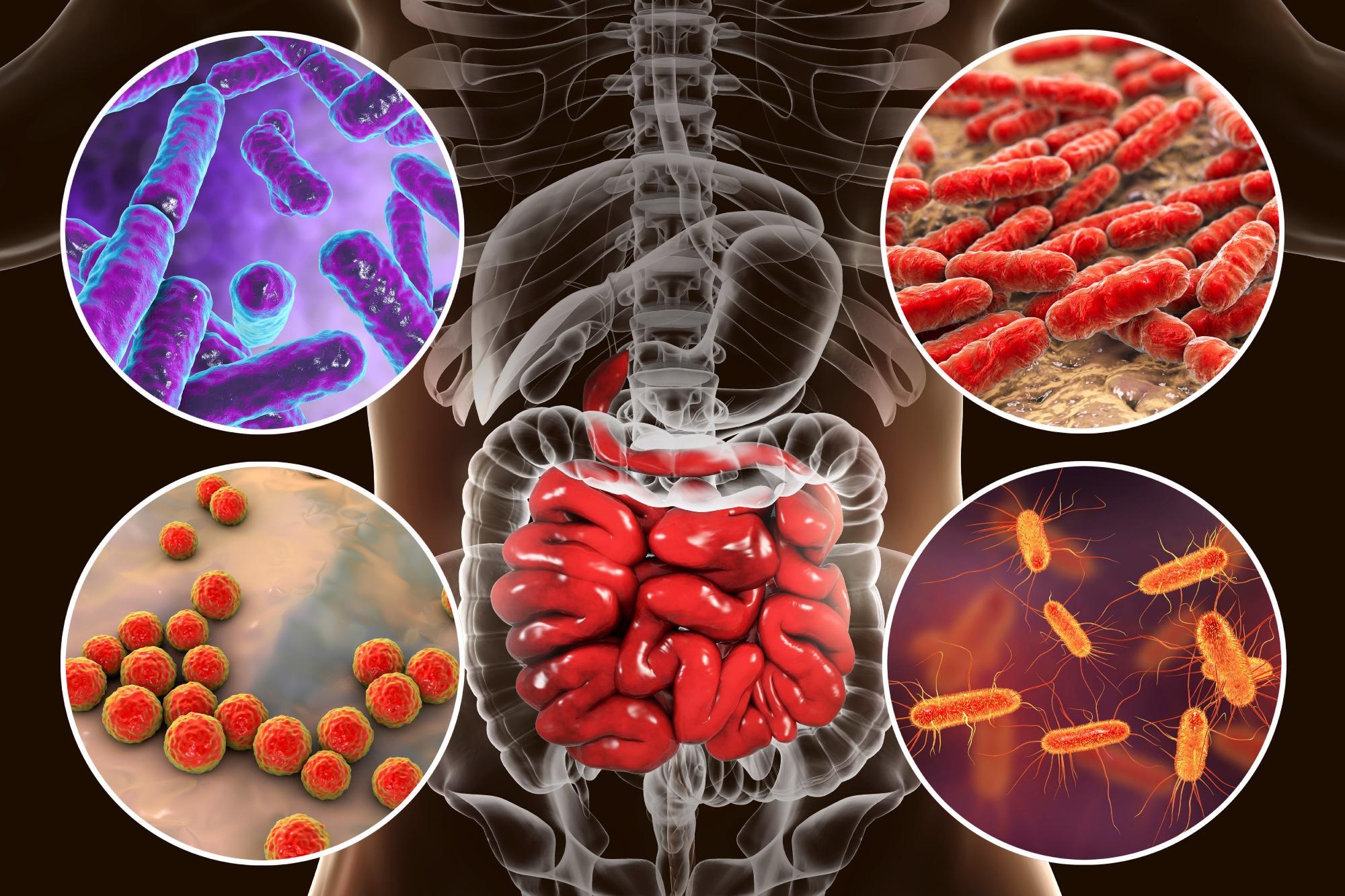 In addition, the composition of gut microbiota has been associated with therapeutic responses to immunosuppressive therapies, such as anti-TNF therapy in IBD. Consequently, the gut microbial metabolites reliably predict the response to anti-TNF therapy.

The team collected serum, and fecal samples of adult IBD patients vaccinated against SARS-CoV-2 either by the BNT162b2 or ChAdOx1 nCoV-19 vaccine. Moreover, these patients had received infliximab treatment for more than 12 weeks. They collected fecal samples between the first vaccine dose and four weeks after receiving the vaccine. Likewise, the team analyzed the serum samples of all the study participants at eight-week intervals, irrespective of the timing of the vaccination.

The researchers measured the antibody responses following a two-dose vaccine regimen of all the study participants using an anti-SARS-CoV-2 spike (S) electrochemiluminescence immunoassay. They observed that only 17 patients (39.5%) had serological responses lesser than the geometric mean titer (GMT) of the CLARITY-IBD cohort. All the study participants of the current study were enrolled for the CLARITY-IBD study to receive vaccination for SARS-CoV-2. Further, the team analyzed each patient's fecal samples using 16S ribosomal ribonucleic acid (rRNA) gene amplicon sequencing and nuclear magnetic resonance (NMR) spectroscopy. In addition, they used ultra-high-performance liquid chromatography-mass spectrometry (UHPLC-MS) for bile acid profiling of the fecal samples.

Furthermore, the team performed uni-, multi-variable, and correlation analyses to determine the predictors of gut microbial and metabolome in relation to serological response to vaccination. 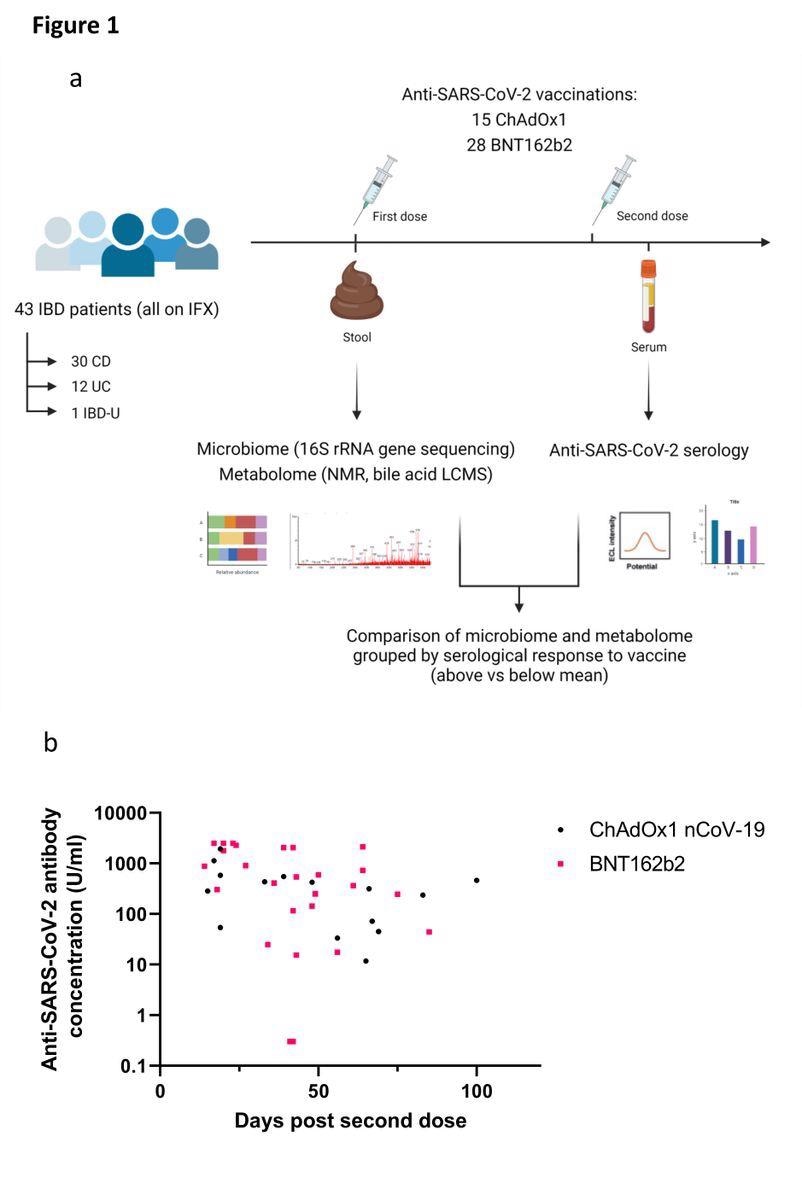 (a) Experimental schema for the study; (b) Anti-SARS-CoV-2 spike RBD antibody concentrations in patients receiving ChAdOx1 nCoV-19 (black dots) or BNT162b2 (pink squares). Each point represents a single patient plotted the number of days after second dose of vaccine when their antibody level was measured

The study cohort had 43 infliximab-treated IBD patients recruited between 25 January and 15 March 2021, of which only eight patients had a history of SARS-CoV-2 infection, as assessed using the anti-SARS-CoV-2 nucleocapsid (N) immunoassay.

In a study by Ng and colleagues, the majority of participants were healthy, and only 3% were on immunosuppressive therapy. Moreover, most of the study participants received CoronaVac, an inactivated virus vaccine, and a minority received the messenger (mRNA)-based BNT162b2 vaccine. Despite the differences, these studies indicated that a Parabacteroides was associated with a lower serological response to vaccination against SARS-CoV-2.

The present study also reported the abundance of Bilophila genus in association with higher serological response to SARS-CoV-2 vaccination. Conversely, Streptococcus was predictive of a below-average serological response. Notably, vaccination with BNT162b2 led to the induction of virus-specific cluster of differentiation (CD)4+ T cell responses with a type 1 T helper (TH1) profile; similarly, Bilophila wadsworthensis was found to be associated with an enhanced pro-inflammatory TH1 response. Therefore, the researchers hypothesized that Bilophila acted as a vaccine adjuvant in some IBD patients, recruiting TH1 cells to generate antibodies against SARS-CoV-2. Notably, individuals exhibiting above average and poor serological response to COVID-19 vaccines had Bacteroidota and Firmicutes as the dominant gut flora.

Overall, the study demonstrated a correlation between the gut microbiota and inconsistent serological response to SARS-CoV-2 vaccination in IBD patients. COVID-19 therapeutics that could alter the gut microbiota or supplement beneficial metabolites could effectively restore the diminished vaccine-induced immunogenicity. Subsequently, TMA could help reduce the anti-TNF-induced weakening of the immune response.

Research Square publishes preliminary scientific reports that are not peer-reviewed and, therefore, should not be regarded as conclusive, guide clinical practice/health-related behavior, or treated as established information.

Neha is a digital marketing professional based in Gurugram, India. She has a Master’s degree from the University of Rajasthan with a specialization in Biotechnology in 2008. She has experience in pre-clinical research as part of her research project in The Department of Toxicology at the prestigious Central Drug Research Institute (CDRI), Lucknow, India. She also holds a certification in C++ programming.