‘Without treatment, a slow and painful death lies ahead’: Hairdresser whose brain is ‘slipping from her skull’ is desperately fundraising £300,000 for surgery only available in the US

A bed-bound woman whose brain is ‘slipping from her skull’ is desperately trying to raise £300,000 to pay for life-saving surgery abroad.

Sarah Jackson, 30, had just realised her dream of moving to Australia in 2013 when she became struck with such severe vertigo she could barely stand.

After returning to Essex, the hairdresser was diagnosed with chiari malformation, which causes the brain tissue to extend into the spinal canal.

Ms Jackson now lives in ‘excruciating pain’ and only leaves the house for medical appointments in a wheelchair.

Ms Jackson claims medics in the UK – both in the NHS and private hospitals – refuse to operate due to the surgery being ‘too risky’. 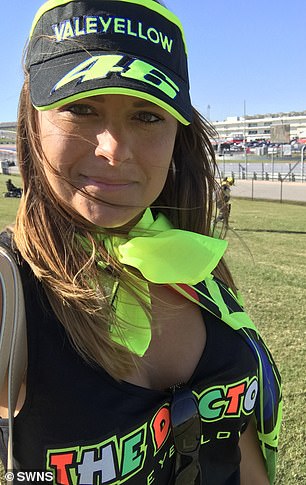 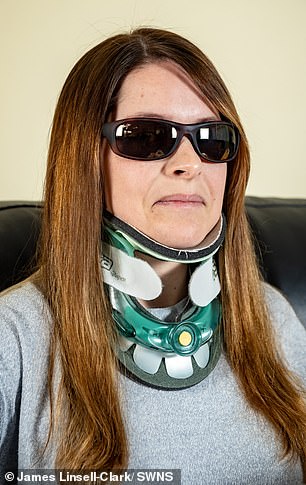 Sarah Jackson – whose brain is ‘slipping from her skull’ – is desperately raising £300,000 to pay for life-saving surgery abroad. The hairdresser is pictured left at Moto GP before she became unwell. Pictured right recently, she is virtually bed-bound and suffers ‘excruciating pain’

Ms Jackson had not been living in Brisbane long when she started to feel unwell.

‘About four months after arriving, all of a sudden I started to feel vertigo and I couldn’t really stand anymore without feeling very faint,’ she said.

‘I had a lot of neck pain. I just didn’t feel right. I had to stop working because obviously as a hairdresser you’ve got to stand.’

Her symptoms became so severe she was eventually forced to move back in with her parents in the village of Eight Ash Green, with her mother Julie, 54, now being her full-time carer.

‘I was just about to get sponsorship to stay out there,’ she said. ‘It was a life-long dream to live in Australia, so it was absolutely devastating.

‘Getting on that plane back was just awful.’ 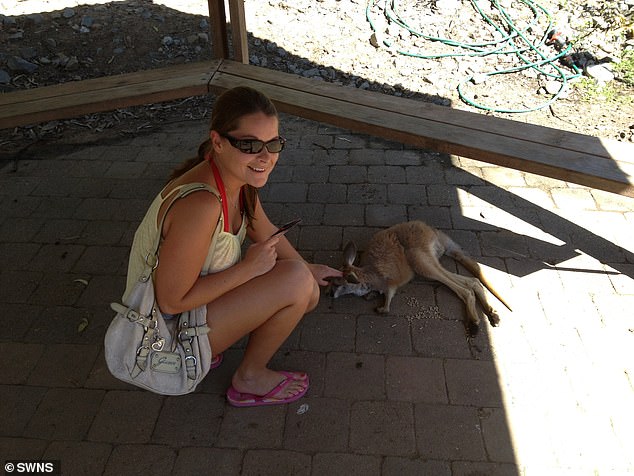 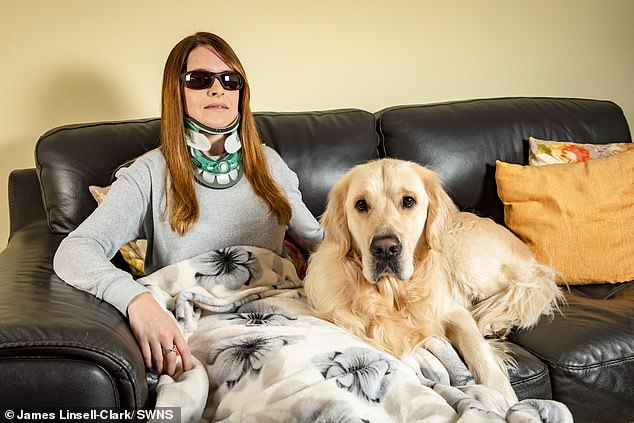 Forced to return home to her parents’ house in the village of Eight Ash Green, Essex, Ms Jackson only leaves the house – in a wheelchair – to attend medical appointments

Ms Jackson first became ill in 2016 when she was diagnosed with postural tachycardia syndrome (PoTS) – an abnormal increase in heart rate that occurs after sitting up or standing.

‘I couldn’t really even stand up for long enough to make a cup of tea,’ Ms Jackson said.

That same year she was diagnosed with Lyme disease and had open heart surgery.

In July 2017 ‘a big seizure caused massive damage, leaving her basically bed bound, [and] needing speech and occupational therapy,’ she wrote on her GoFundMe page.

After being diagnosed with chiari malformation, she discovered she had the related condition Ehlers-Danlos syndrome (EDS) – which causes tissues to weaken and also affects Ms Jackson’s mother.

As if that was not enough, Ms Jackson was later diagnosed with craniocervical instability – deformation of the brainstem – and atlantoaxial instability – excessive movement at the top of the spine.

Speaking of her conditions, Ms Jackon said: ‘[They] cause me an excruciating amount of pain. I’m either stuck in bed or in a wheelchair if I have to go out.

‘My brain is slipping into my spinal cord.

‘I have to get these three operations as soon as possible and get my life back so I can start living again like a normal person.’ 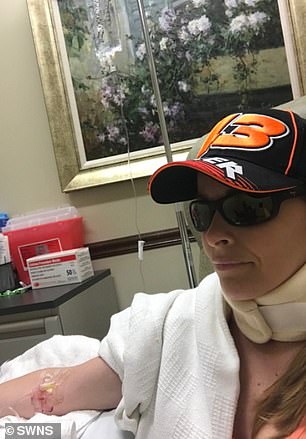 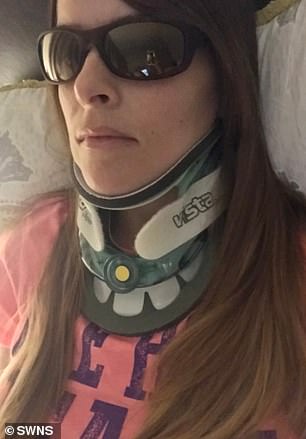 Ms Jackson is desperate to get her life back but fears she is facing ‘organ failure, paralysis, and a slow and painful death’. She claims doctors in the UK – both in the NHS and private hospitals – refuse to operate due to her case being too risky. But a medic in the US has agreed to help her

Ms Jackson claims a private upright MRI scan – not available on the NHS – in July last year revealed her brain has slipped by 10.2mm.

‘I spoke to an American specialist [and] they said they would operate immediately,’ she said.

‘If anyone had anything over 5mm, he said that would be an emergency.

‘My neck is also crumbling and pushing onto my spine, and that’s life-threatening.

‘It’s a very dangerous operation but I think it’s a risk worth taking.’

Writing on her fundraising page, Ms Jackson claims her EDS ‘means no surgeon will touch her in this country as it makes surgery extra dangerous’.

Ms Jackson – who is still taking oral antibiotics for her Lyme disease – hopes to have decompression surgery to remove a bone at the back of her skull, which will create more space for the brain.

Spinal fusion surgery that joins vertebrae into a single structure should also stop her backbone moving.

‘Without treatment, there’s no doubt that at any time – organ failure, paralysis, and a slow and painful death lie ahead,’ she said.

Ms Jackson claims the money raised will go towards hospital fees, as well as paying for her flights and accommodation. Donate here.

WHAT IS CHIARI MALFORMATION?

Chiari malformation occurs when the brain tissue extends into the spinal canal. This can happen if the skull is abnormally small or misshapen, which presses the brain downwards.

The Brain & Spine Foundation in the UK and the National Institute of Neurological Disorders and Stroke in the US both estimate one in every 1,000 people are born with the condition.

It may actually be more common due to not all sufferers developing symptoms.

There are three types of chiari malformation:

Type I – occurs as the skull and brain are growing. Symptoms usually appear in late childhood or early adulthood and include neck pain, poor balance, co-ordination difficulties, numbness, dizziness and impaired vision

Type II – is present at birth and related to spina bifida. Occurs when more of the brain tissue extends into the spinal cord than in Type I. Symptoms may include changes in breathing patterns, swallowing problems, arm weakness and quick downward eye movements

Type III – is present at birth and the rarest form of chiari malformation. Occurs when a portion of the lower part of the brain extends through an abnormal opening in the back of the skull. Has a high mortality rate and can cause brain damage

Treatment may not be necessary if symptoms are mild with just regular check-ups and MRI scans being required.

However, surgery can be carried out to remove a small section of bone at the back of the skull. This relieves pressure by giving the brain more room.

The procedure runs the risk of infections, fluid in the brain and spinal cord leaking. Although the operation helps to relieve symptoms it cannot cure nerve damage that has already occurred.